FOREIGNER "The Best Of Foreigner 4 & More" 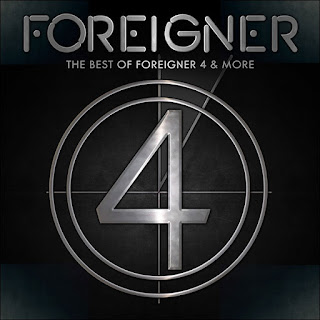 By this point, I feel like I'm the cranky old guy when it comes to reviewing "new" releases from classic bands that I grew up loving.  I know, I know...bands change, members quit/die/get fired,  new members are hired/born, whatever, and the band goes on.  Van Halen has replaced multiple members (including one through birth).  KISS...how many members have they had?  Journey...what...5 lead singers now?  So, yeah, I understand that nothing, not even beloved bands stay the same forever.  And I can honestly live with that as long as it doesn't feel like the band is betraying their fan base to make a cash grab, which is precisely what this "new" album from Foreigner feels like.  Oh, and the reason I keep saying "new" is because that is what the band is calling it, what the label is calling it, and what the little sticker on the outside of the wrapper calls it.  But, if you look very closely...on the back...at the very bottom...in tiny print...you will see that what this is is a new LIVE recording.  And, yeah, I get that the title should have given away that this was not NEW material...in fact, it DID give it away...so why the deception?  There is literally NOTHING new on this record....well, except some of the members, I guess...

The title is also a bit deceptive because it is NOT a "best of" record, at least in terms of hits, as the casual Foreigner fan likely has never heard "Night Life", "Woman In Black", "Break It Up", or "Girl On The Moon".  And, while all four of those songs do appear on the band's classic 4 album, they don't appear in the order they do here.  Plus, two songs from that killer record, "Luanne" and "I'm Gonna Win", are inexplicably left off.  So, I guess its the "best of 4" because 8 of the original tracks are good enough to be included, but not the other two?  Whatever...

The additional tracks, while definitely hits for the band, don't really make a lot of sense as far as how they were chosen or why they were included.  "Say You Will" comes from one of the most maligned Foreigner records ever, Inside Information, which most die-hard fans consider to be too poppy to be a classic Foreigner record (I personally disagree, but who am I, right?).  "I Want To Know What Love Is" is supposedly one of the main songs that drove a wedge between Mick Jones and Lou Gramm, mostly because Jones didn't like it because it didn't rock hard enough...but now that Mick is the only original member left, he includes it here.  I have no complaints with "Hot Blooded" or "Cold As Ice" being included because, quite honestly, they ARE two of the best tracks by this legendary band and are simply must-haves on any compilation or in the live setting.

The performances here are solid, if a bit cookie cutter in nature.  Hansen is an incredible vocalist; of that there is no question.  He hits all the notes, phrases things very well, and seems to really put effort into most of these songs, which is admirable, considering he is a stand-in.  But the band sounds bored, quite frequently...like they are on autopilot.  Gimbel's saxaphone parts may be the one true exception, as he wails on his instrument in several spots, and really adds to the songs he is a part of (maybe it's the sax player in me talking here, I don't know...).  But other than that, the leads are generally lifeless copies of previous efforts, the bass, while adequate, isn't really bounding out of the speakers, and the drums provide a solid, if unspectacular backdrop for these songs.

To be honest, it feels more like I am listening to a really good cover band than it does like I am listening to Foreigner.  And I have no problem with that as far as going to a concert.  But stop putting out records claiming to be Foreigner, please...especially if all you are going to do is continually repackage hits that only one current member has ever played on.

Speaking of packaging, the packaging here is above average, with a nice collage of pictures at the center of an 8-page foldout insert.  The band line-up, some recording information, and basic credits are included; lyrics are not, but honestly, who needs them for most of these classic songs?  There is also a full page of thank-you's, as well.

The production is solid, as would be expected from a band as well-known as Foreigner.  Hansen was the producer of the record (Jones executive produced it), and the mix is really good, which can often be a problem with live records.  Speaking of "live", I didn't notice any glaring overdubs here, which are often easy to detect on older live records, and everyone knows live records are never 100% live anyway, so that's not a real issue for me.

In closing, allow me to sum things up with a couple of quick, intentional puns.  It does NOT "Feel Like The First Time" I have heard this record, but it may well be the LAST TIME I pick up something from this band that is not 100% new.  Why?  Because these one-time "Juke Box Heroes" are quickly becoming karaoke versions of themselves, and it's really sad for this long-time fan.

Rating:  Its some of the biggest hits from Foreigner, and its performed adequately...if unspectacularly...so rock this at 6, but honestly, there is ZERO reason to pick this CD up.  None.  You likely already own the best of Foreigner with the REAL band playing, anyway.  And if not, this isn't even the best live version of any of these songs that you can find elsewhere.