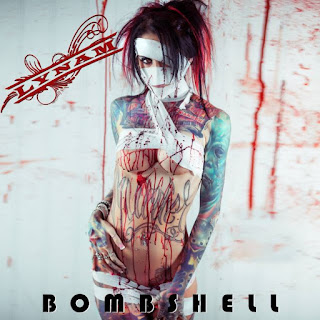 Lynam have returned with their SIXTH studio album in just under 15 years, which is quite an impressive feat in this day and age, especially considering they don't have major label support.  This time around, the band shifts gears just a bit, turning in a bit more of a poppy effort, but not at the cost of their sleazy edge.  Also incorporated into the sound this time is a bit of studio production effects, particularly on Bunton's vocals on a couple of songs, and scattered around in various other places across the EP.

The title track, "Bombshell" comes rocking right out of the chutes with a guitar riff that is practically lifted straight from the Kinks hit, "All Day and All of the Night".  From that point, however, the bottom end comes punching in, and Bunton drops his vocals into a lower register for the opening lines of the first verse, and this once-retro sounding track becomes a catchy, sleazy rocker with a simplistic-yet-wickedly-catchy chorus backed by a, dare I say, danceable beat.  Yeah, things are a bit different in the Lynam camp with this effort, but I can't say I dislike the approach.

"Flick My Switch (You Turn Me On)" starts off with the sound of a motorcycle being started, but programmed effects immediately interject themselves into the track, and it's off to the races with another high energy rocker that once again has that damnable dance beat running through the underbelly of the whole thing.  The guitars maintain their edge and grit, and Bunton's vocals bounce along with the song, which I keep cursing as it continues to make my head bop along even though part of me feels like I should be turned OFF by what's going on thus far with the Bombshell EP.  Programming is used throughout this track in much the same way that In This Moment drops them into the vocals, giving the words a stop-start-stop stuttering effect in places.

"Send You Back" is a much darker track than the first two, a bit slower in tempo, and really filled with the punch of electronic bass drums and snare in a "stomp stomp clap" fashion.  The guitars buzz in an angry fashion here, and the slightly higher-pitched backing vocals are a perfect foil for the angry snarl Bunton uses for much of this track.  Incidentally, this song also features a great...but all too short...guitar solo, to go along with the keys and programming that are draped across the song throughout.

"The Worst In Me" continues the darker, more bottom-heavy sound that was started by "Send You Back".  The first verse is rather sparse, as it is largely bass and drums under Jacob's vocals, but by the pre-chorus the guitars have kicked in, and...are those hand-claps I hear in the chorus, itself?  This song reminds me SO MUCH of Joan Jett's "I Hate Myself For Loving You" in it's structure that I kind of want to toy with mixing the two together, just to see what shakes out of that blender!  Once again, there is a tasty little guitar solo and a frustratingly, painfully catchy hook and chorus that stayed stuck in my head for a couple of days (often intermixed with Jett's track, also!).

"What's Left" is also fairly dark in sound, again using programmed effects on the guitar tones which remind me a bit of the sound used by Stabbing Westward, to be honest.  (I'm only talking about the guitar tones, however, as the song is nowhere nearly as aggressive or angry as most Stabbing Westward material was...)  The bass lines on this song are stellar, and dang it if it isn't yet another uber-cathcy...uber-DANCY type of track that I could hear spinning in a techno club almost as easily as blaring from the speakers at a rock show!  In fact, all of these tracks, but this one in particular, sound ripe for full-on techno remixes, and I'm going to go on record as stating I wouldn't be at all shocked if the band decided to do that to a song or two as bonus cuts on their next effort.

The closed-minded are likely to find lots of things to NOT like about this record, and that's too bad because I think they are missing out.  Lynam definitely stretches their musical muscles here, adding in new elements, both retro and modern, along with more techno/new wave influences than I have ever heard them using before, but they do it to really good effect. Not may favorite Lynam effort ever, and I still prefer the work Bunton and Paul did on their side-project, Adler, but this is not a bad little EP at all.  As a matter of fact, I'm going to say that this is one case where I'm glad this is just an EP because I think these 5 songs and 15+ minutes are just about the perfect dose of this type of technosleazepop (patented and trade-marked, so back off!).

Rating:  Definitely catchy. and I'll even say crankable.  Give it a 7, but seek out their earlier stuff if you are looking for more rock and less techno.