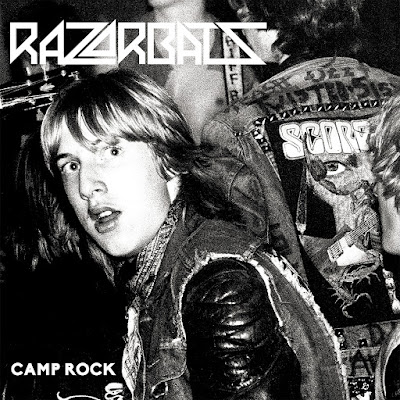 Ah, Europe.  It seems like whenever I start to get a bit jaded about the music that has started to flood my mailbox, inbox, or Dropbox, I can always count on Europe...and quite frequently Norway...to give me hope again.  The Razorbats are absolutely no exception here, as this 70's-inspired group of rockers may just be the freshest sounding act to roll across my desk in quite some time...possibly all of 2015.

Now, when I say the band is 70's inspired, don't fret that I'm talking disco or 70's folk rock or anything of that nature.  I'm talking the hard rock of the late 70's, with bands like Sweet, T. Rex, Cheap Trick, Alice Cooper, etc., mixed in with a couple of shots of the punked-up attitude of Too Fast For Love-era Motley Crue, and the NWOBHM sound of early Def Leppard thrown into the mix. If pressed, I would say it reminds me of the way KIX sounded, to a degree, on their first two records before jumping fully into the 80's sound with Midnite Dynamite...although the Razorbats take it even a step further.  Sound interesting?  It definitely should, because these guys are so soaked in the sound you would swear that several of these tracks were recorded in 1978, not in 2015.

The album kicks off with "Planet Riff", which has that NWOBHM sound I just mentioned, with the riff sounding like it could've been recorded during Leppard's On Through The Night sessions.  The tone is perfect, and the retro-production values absolutely nail the sound here.  Even's vocals, which sound similar to KIX's Whitman here, have that hint of reverb that seemed to always seep into the best hard rock of the 70s, and the rhythm section keeps things locked into a laid back groove that is not overly complicated, but definitely catchy.

"Internal War" keeps things rocking with a tune that sounds a lot like a cross between Cheap Trick and the KISS material that Ace Frehley was singing on during the 70s.  Again, that hint of reverb is used to great effect on the vocals here, much like Ace used on "New York Groove" and similar songs.  The solo here is simple, yet totally fitting into the referenced time frame, and it is already apparent that this band is not just able to recreate the sound of the era they are influenced by, they are attempting to add to that time's musical catalog...just 40 years later!

"Kids Of The 70s" could've been the title track of this album, as it perfectly lays out who this band is and what they are about.  Sounding like the little brother of Cheap Trick's "That 70s Song" from the hit sit-com, That 70s Show, the chorus is pure crowd anthem material, and I am more than certain that this song gets everyone up from their barstool or booth to stomp their feet and clap along.  Love this track and all that it brings with it.

"Desolation Highway" slows things down a bit, blending a big, fat bass riff into the shuffle of this haunting song.  A nice, bluesy guitar solo compliments Even's raspy vocals on this track which again features a simple, yet instantly catchy chorus that is likely to induce more than a few Zippo sightings in the live setting.  Another absolutely killer track that actually FEELS like it is from the 70's, and isn't just a tribute to the time.

"Soulshaker" picks things up a bit, not with breakneck speed, but with sass and attitude.  I absolutely love the guitar solo here, and Knut does an excellent job of filling in every little gap in this song with solid, yet not flashy, kit work.

"Subway Grinder"  is where the speed kicks in full-throttle, evoking those early Crue references I dropped at the beginning of this review.  Utilizing the same type of punk attitude that "Live Wire" used to such great effect, "Subway Grinder" just plows straight ahead with churning guitars, a short-yet-furious guitar solo, snappy drums, a tight bass line, and loads of spit and snarl from Even's vocals. (A few tracks later, "Betty Boop" uses much the same stylistic approach, again punking things up to great effect...and great speed...never letting off the throttle until all ONE MINUTE AND TEN SECONDS are spent!)

"Transformer" slows the pace back down again with its fuzzed-up guitars and just-above-ballad-tempo, much the way AC/DC used to do back in the day, and "Getaway" continues hanging out in that same speed range, although the feel is now very much in the vein of early Def Leppard, as Even manages to channel a bit of a younger Joe Elliott in how he approaches his vocals.

"Mess It Up" kicks things back into Too Fast For Love-inspired gear, as Even adds the gravel back to his vocals, followed by "Betty Boop", and then one of my other favorite tracks on this amazing release, "Warhead".  A rumbling bass line comes chunking out of the speakers before the guitars kick in for a moment, only to back completely off as Even's vocals bite their way into the track.  Just a killer, killer 70's fueled track, complete with hand claps, gang backing vocals, and a ringing guitar solo that makes me sad that things have come to a close...and very happy for whomever invented the repeat button!

The production is SPOT ON here, with perfect 70's fuzz on the guitars, absolutely perfect vocal tracking, and stylistically correct rhythm work from Knut and Stig.  I honestly don't know what they could've done to make this a better record as far as production goes, because I can't find a single thing to complain about.

The packaging us UBER-simplistic, with the front cover of this slipcase being the above picture, and the back being the tracklisting.  That's it.  I had to contact the band to get a press kit to even have the member's names and the instruments they played here.  No lyrics, no thank you's, no writing credits, and no other photos are included here.

If you have any inclination to seek out a new band with an amazingly well-performed retro sound, you MUST look into the Razorbats!  I'm somewhat slack-jawed at just how well these four Norwegian guys have managed to nail the attitude and sound of an era that none of them were even close to being born in.  They must have raided their parent's...maybe even their grandparent's...record collections to become this well-versed in the style and sound, but it is well worth the stereo needles that were probably used up in their basements and garages.  Make no mistake, the Razorbats are the REAL DEAL, folks...they just made their first album 40 years after the fact!

Get your copy of Camp Rock HERE...and you will know exactly what I am talking about as far as the greatness of this band.

Rating:  Incredibly crankable, give this one a solid 9 on one of the best albums of 2015 as far as G2G is concerned!

Back To Reviews Index
Posted by arttieTHE1manparty at 2:11 PM