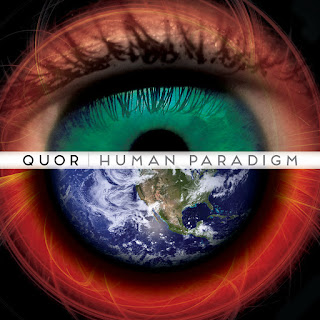 
We're Going To Be Awesome EP

Quor.  Don't ask me, I have no clue.  I looked it up, and there is no definition for Quor in my dictionary, although there should be.  Quor should have "pretty dang cool" listed as it's entry, because, as shocked as I was when I first popped it in, that is how I would describe Human Paradigm.  I mean, come on...when you are sent a CD by a trio named Quor (pronounced "core", I believe), you aren't exactly thinking metal, right?  I was thinking something along the lines of either a bizarre alternative project or some kind of college garage punk band with songs about beer and "screw the establishment!".  Well, "don't judge a book by its cover" can also be morphed into "don't judge a band by its name", because Quor is NOT what their name may strike up in your mind.

Based in San Diego (again, not exactly a metal mecca), Quor is a polished, professional musical outfit with an incredibly tight sound intermixing elements of 80's heavy metal and thrash with more modern bands like System of a Down, adding in hints of Tool and splashes of doom/sludge-styled hard rock.  Mixing relatively complex percussion patterns with intricate guitar solos, generally clean vocals, and solid rhythm guitar, Quor comes across as a band that plays what it wants, taking elements of their own personal influences and creating their own form of metallic mayhem.

Take, for example, the album opener, "The Silence and the Spark".  Immediately recognizable are the thrash elements I spoke about, especially in the speed and the precision of the riffs and rhythms.  The song is also a bit heavier than a lot of people associate with pure Bay Area Thrash, at least as it originated in the 80's, and it also manages to incorporate melody and a hook not often found in the full-on speed shred fests of the 80's band.  Much the same can be said of "When the Gods Speak", which uses more thrash-related guitar elements, some stop-start rhythms, a really nice hook, and a rather chantable chorus that I would imagine as an anthem of sorts for the band.  The next two tracks slow the pace a bit, with both "Human Paradigm" and "The Reverent" being more mid-tempo in pace than the two face-melters at the outset.  However, this doesn't mean the music is any less powerful, and the title track, in particular, features a scorching guitar solo.  "The Reverent" has a Euro-power metal feel to it in places, partly due, I think, to the lyrical content, which I have read is based on a novel Corn is writing.  (May need to check that out...).  The EPs closer, "Guardian" returns to a bit darker sound, utilizing that doomy/sludgy style I referenced earlier, while also incorporating some big drums and technical riffing in another anthemic sounding track.

This particular package is actually a combination of the band's 2013 EP, We're Going To Be Awesome (which was also the band's name before switching to Quor), and their newest effort, Human Paradigm.  I'm glad they incorporated both albums into this package, as neither EP is particularly long, but I do kind of wish they had put them onto one CD so I didn't have to keep switching back and fort.  First World problems, I know...  Anyway, of the two EPs here, I would have to say I prefer the new material, although the older stuff isn't bad, just not quite as heavy with a bit more radio-rock approach to the sound in places.  Take, for example, "The Fragile Break", which is very reminiscent of the way Metallica changed their style and sound on the Black Album and, to a lesser degree, Load.  Still crunchy, but nowhere near as speedy or thrashy as the first three epic albums.  "Watching You" is pretty darn fast, I do have to say, and it is my favorite from the first EP, and "Let's Rise" gives it a good run, but neither song is quite up to the level of the newest material.

What's really amazing to me is the fact that Human Paradigm was reportedly recorded in just a single week, which is unheard of these days, especially with as tight and powerful as the production is on this disc.  The older EP is also recorded very well, perhaps getting a bit of a remaster treatment in this package (or perhaps not...no indication in the notes that I can find).

The packaging is simple...a double-sided cardboard slipcase...as is often the case with small, indie projects.  Mine was not sealed, so I don't know if there was a lyrics sheet that slipped out or something, but mine does not have lyrics.  There is also virtually nothing in the way of liner notes here, so a lot of my background info came from the press kit I was sent.

Metalheads looking for something new to chew on their ears for a while would do well to seek out this deluxe version of Human Paradigm as it incorporates a lot of older elements into an updated package.  While not pure speed/thrash metal, it is pretty dang good and the new EP, especially, has seen a LOT of spin time in my player.

Ratings:  Human Paradigm cranks to 8.5, We're Going To Be Awesome slides back a bit to rock at 6.5, with the total deluxe edition checking in at a very crankable 7.5.