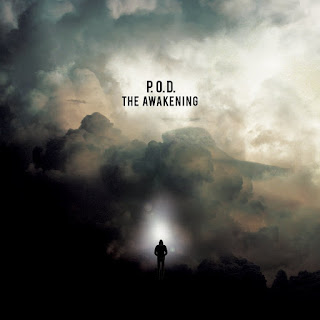 P.O.D. is a band that keeps trying to re-invent themselves, it seems, with varying degrees of success.  They have gone from a ground-breaking Christian rapcore group to garnering massive international success with the more modern radio rock friendly album, Satelite, then cranking up the metallic content of their music for an album or two, then unleashing an acoustic record, The So Cal Sessions, upon their fanbase with their last release.  While always retaining elements of rap and often reggae, and mixing in varying doses of hard rock/metal, the band has never really made two consecutive albums that sound all that much like one another.  They don't start now, as The Awakening is the band's first foray into the world of concept records, of all things!

I can say without hesitation that this is the P.O.D. album I have listened to the most in a LONG time, largely because my kids absolutely love the album and I can't manage to get it out of my CD player, so I am very familiar with just about every nook and cranny of this record.  As such, it is extremely easy for me to pick out highlights without even a bit of thought here.  The record is basically made by the time you hear the first four tracks, because every single one of them is a winner.  "Am I Awake" kicks off with some pretty cool news snippets and sound bytes (although some of them, I suspect, are manufactured), before leading into a nice, bottom heavy rocker complete with a great guitar riff,  This leads right into the album's lead single, "This Goes Out To You", which is a definite Satelite or Testify throwback type of song, and the only track that doesn't have it's beginning marred by some odd sort of intro or interlude (more on that in a bit).  It's plain to see why "This Goes Out To You" is the choice for the first radio track here, as the chorus is insanely simple, yet highly catchy, and I can definitely see this song turning into a crowd participation anthem in concert.  "Rise of the NWO" is another gritty rocker with yet another highly catchy chorus and a driving guitar riff that just bores into your brain, intermixed with a distinct Middle Eastern tone to some of the secondary guitar parts.  Three for three right out of the gate in terms of solid rockers...that's a pretty impressive start in this day of creating singles and then throwing filler fluff in between the hits to complete an album.

"Criminal Conversations" is up next, and if I had to make a guess, I would say that this will not only be the next single from The Awakening, but I have a hunch it may be the most popular song P.O.D. has released as a single in a long time.  This ballad is chock full of emotion, with both Sonny and Maria Brink of In This Moment matching each other's vocal expression note for note.  I was truly impressed by this song, particularly with Brink, who I cannot claim to be a fan of.  Her porno-moan delivery style just grates on my nerves (and eardrums!), and 95 times out of 100 I tune her songs out...or turn them off, when possible.  Here, Brink scales back the orgasmic timbre of her voice and just sings for the most part, really drawing out a powerful performance and adding a lot of depth to an already impressive song.  Very nicely done.

My kids love "Somebody's Trying To Kill Me", but more for the brief intro where the story's character yells the song's title at another character before the music even kicks in.  The song, in all fairness, is actually one of the weaker songs on the album, as the chorus is rather monotonous and just kind of drones on and on, despite a relatively strong guitar hook.  "Get Down" improves upon things a bit by turning up the tempo slightly and allowing Sonny to get more aggressive with his vocals.  "Speed Demon" is a full-throttle rocker, bordering on punk as far as it's use of loose speed and aggression goes, and is one of the better tracks here, as is the similarly styled, "Revolucion".  The album closes with "The Awakening", which is a really good song (once you get to it), although it may be a bit long and a bit much to filter through by the time you have finished a rather long record.

Not everything is perfect here, by any stretch.  For one, unlike Queensryche's Operation: Mindcrime, for example, the spoken interludes on The Awakening are all attached to other tracks...they are not stand alone...so you can't skip through them, which is a real bummer, as several just make the album way too cumbersome and clunky.  To be honest, it's actually kind of hard to even follow the storyline in places, and I wonder if some of the narrative parts weren't left on the cutting room floor due to a lack of space or something.  Several of the interludes are down-right annoying, while a couple are kind of hard to figure out what is going on.  On top of all of that...the vocal acting for a couple of the characters is not particularly good.  Oh, well...

I am NOT a fan of the ballad "Want It All", as it really sticks out like a sore thumb and totally ruins a run of pretty good songs, especially coming out of the barn-burning "Speed Demon".  Where the other ballad, the previously mentioned "Criminal Conversations", manages to keep the track interesting and energetic, thanks in large part to Brink, "Want It All" just falls flat for me.  And, as mentioned, "Somebody's Trying To Kill Me" is rather bland vocally, although the guitars are meaty enough to resist the temptation to hit skip...at least some of the time.

Lyrics are included in the packaging, along with full credits and individual thank-you's from each of the members.  There aren't any band photos, but there is the interesting cover art which I find I like quite a bit.  The production is very clean and has a good dose of bottom end, as you would probably expect with a hip-hop influenced group such as P.O.D.

I think this is the band's best record in a few years, and I would easily slot it in with their top 3 or 4 as far as the songs themselves go.  While there are some flaws, this is really a pretty solid record with some of the best new material from the band in quite some time, and it is easily the most cohesive album from start to finish of any album since Satelite, although Murdered Love is a solid record as well.  The overall disjointed feel caused by some of the interludes does do the record some damage, but it doesn't make it unlistenable by any stretch.

Rating:  Crank this to a 7, which could have possibly been an 8 if not for some execution issues with the way the concept part of the album was presented.

Back To Reviews Index
Posted by arttieTHE1manparty at 4:38 PM