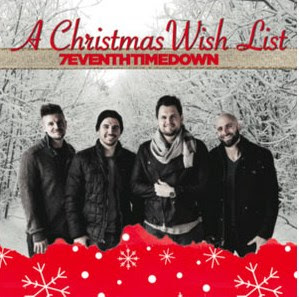 I don't normally review Christmas albums, but when I stumbled across A Christmas Wish List by accident, I thought I would possibly expose the EP to readers here who may have also missed out on snagging this release.

For those who may be unaware, 7eventh Time Down (just pronounced "seventh") is a Christian rock band from Kentucky who have now released three full-length studio albums of modern radio rock, frequently similar in style to bands such as Daughtry, Shinedown, Lifehouse, Seventh Day Slumber, Disciple, etc.  It was almost exactly two years ago today (12/23/13, in fact), that I reviewed their sophomore album, Just Say Jesus, which I enjoyed a good deal, so when I saw that this EP came out between that album and their newest effort, God Is On The Move, I was hopeful that the band would maintain a similar style and sound to the one I had found myself really liking.  I was not disappointed, for the most part.

This Christmas EP starts off with a couple of originals from the band.  Neither one is destined to become the next "White Christmas"...or even "Blue Christmas"...but both are solid efforts.  "Wish List" is my favorite of the two, as it brings a bit more creativity to the songwriting, with "This Christmas" coming off as a bit too pop for my liking, especially in the way it's produced.  "Wish List" isn't a particularly hard rocking number, either, but the chorus is rather catchy and you get the feeling the boys in the band mean it when they sing "I wish for joy to come fill our hearts, I pray for peace and a brand new start, I wish for love and Your Kingdom come, This is my wish list...".  Ending with a nod to "Jingle Bells", this is a nice original number that I would imagine will get a few spins around the holidays for the next few years.

As always, 7TD is not afraid to express their faith, either in their originals, or in the choice of traditional songs on this EP.  "I Heard The Bells On Christmas Day" is a song that I have always loved, but very rarely hear anyone cover.  For those who may not be aware, the song is based upon a poem written by Longfellow more than 150 years ago during the Civil War.  Perhaps the fact that 7TD is from one of the Civil War states makes this a song they grew up hearing more frequently...who knows.  All I know is that I am very glad they chose this song for their album, and I hope to hear this heartfelt rendition find its way onto radio stations throughout the country in their Christmas rotation.  It is performed to near perfection, in my opinion, and is the high point of the record for me.

"Little Drummer Boy" is my all-time favorite Christmas carol, so when I saw that 7TD included it here, I was pretty excited.  But rather than take the tried and true approach to this song, 7TD throws fans a complete curve by intermixing RAP into this song!  Yes...rap.  The track starts off with a cellphone ringtone, followed by Mikey (I believe it's Mikey) answering the phone and talking to a record label exec...maybe the producer of the record...someone...and throwing out the idea of a rap song for this record.  Things start off with an excellent snare drum intro, with some effects thrown into the mix, before it backs off to just the drum and Howard's vocals, which are chock full of emotion and delivered in a very powerful style...right up to the first set of "puh rum pum pum pums". At that point, the rap kicks in, with a full verse of lyrics not found in the original classic.  The song then transitions back to the more traditional approach and lyrics, only to be interrupted once again by more rap and some vocal effects.  I'm not 100% sure who does the rap here...I think Mikey does at least part of them...but they are sharp, quick, and easy to understand, which is not always the case with rap song, as most readers here would attest to.  While I am never going to claim this as my favorite version of this classic song (that belongs to these guys), I will give 7TD credit for the attempt at originality here, and will admit that the song has grown on me after repeated listens.

The album closes with one of the band's most well-known songs, "Just Say Jesus", in its radio edit form.  Very much in the Daughtry/Lifehouse vein musically, this is a nice little "gift" to fans of the band, and also a solid introduction to potential new fans who may have picked up this Christmas EP on a whim.

I realize there are tons of Christmas albums out there, with dozens more released every year, but if you are looking for something a little bit different, I would encourage you to seek this one out.  I know it is available on iTunes and Google Play, as well as on Amazon Music...even on CD if you want it.  Check it out, if for no other reason than to hear an excellent version of "I Heard The Bells On Christmas Day".