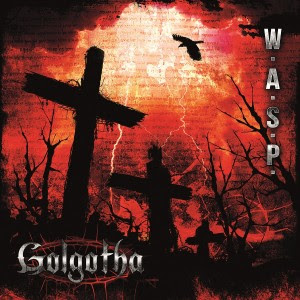 Since 1989, WASP has been, arguably, the most consistent of the 80's metal bands, at least in terms of the overall sound.  Since shedding their shock rock persona with 89's Headless Children album (title notwithstanding), Blackie and whatever version of the band he is using at the time, has become a far more mature, introspective band, with much deeper lyrics...and more depth musically, as well...with only occasional blips on the WASP radar (most notably the oddly angry industrial K.F.D from 1997, and horrendous 1999 effort, Helldorado).  It is not hard at all to draw a fairly consistent line musically and lyrically, between Headless Children, the 1991 masterpiece The Crimson Idol, 95's Still Not Black Enough, Unholy Terror from 2001, Dying For The World from '02, The Neon God (parts 1 & 2), which were released back-to-back in 2004, and 2007's Dominator.  WASP found a core sound and very rarely strayed from it, utilizing heavy lead and rhythm guitars, 70's-inspired, Hammond-styled keys, thundering drums, and competent bass playing, to carry the majority of their albums.  Unlike their 80's counterparts, WASP was never found toying with pop music (Def Leppard), country (Bon Jovi, Bret Michaels, Steven Tyler), or alternative music styles (Metallica...to name just one); WASP was...well, WASP.  You had a pretty good idea of what you were going to get every time you picked up a new WASP release.

Also gone from this set of above-average-to-amazing records were the overtly sexual lyrics, replaced instead by deeper subject matter ranging from politics and emotional relationships to...of all things...religion.  No one really knew what to think of this deeper-thinking Blackie...and it only got harder to figure out when 2009 saw the release of  the overtly Christian album Babylon.  What was Blackie's angle here?  Blackie...a Christian?  Who was he trying to fool?

2015 found Blackie and his newest incarnation of WASP carrying on in a similarly Christian direction with the release of Golgotha, the band's 15th studio album.  Started back in 2011, and delayed by a world tour and Blackie's severely broken leg, this new record picks up right where he left off musically, lyrically, and thematically.  Blackie's trademark roar of a voice is still firmly intact, not sounding like he has lost any of his range, although he was never a high-pitched screamer like so many hair bands of the 80's.  The guitar tone is still unquestionably WASP, as easily identifiable to the dedicated fan as the established tones of other long-term bands, from Van Halen to Stryper to Iron Maiden.  When you hear one of those band's guitars, you KNOW who you are listening to without even seeing the album cover.  Much the same with WASP and their consistent post-1989 approach.  And the style and structure of the songs, and even the album itself, is exactly what listeners have come to expect from Blackie & The Boys through the years.

The album opens with the uptempo rocker, "Scream", which could have easily slipped into the Babylon album with little problem.  In fact, if there is one knock on this record it is that several of these new songs, including "Scream", almost sound like reworked versions of other, older songs.  Not carbon copies, but very similar in certain aspects.  The same can be said of the follow-up rocker, "Last Runaway" which sounds like a cutting-room floor track from Crimson Idol or Still Not Black Enough, which means its a pretty dang fine song!  Blair rips through a particularly hard-charging solo on "Last Runaway", and the overall song structure, including the galloping bass work of Duda, hearkens back to the best stuff WASP has released.

Two-for-two is a solid start to any record, and WASP is on fire from the get-go with Golgotha.

"Shotgun"  is a politically charged number that continues the greatness of the first half of this new record, as yet another furious rocker is imbued with Blackie's reinvigorated roar, and some exceptional work from the guitar tandem of Blair and Blackie which may be...sorry Chris Holmes fans...the most adept, powerful tandem that has ever been in the band.  These two just feed off of one another and compliment each other so tightly, so seamlessly, it's truly a joy to hear.

"Miss You" slows things down...WAY down...with a haunting power ballad about the loss of a loved one.  Blackie's always emotive voice is in fine form here as he achingly pleads "Oh God, I miss you--tell me can you hear me/Oh God, I miss you--I can't scream and I can't speak".  This track reminds me a lot of "The Idol" from Crimson Idol, both in the depth of emotion poured out and in the soaring guitar solos (one in the middle, and a massive solo that takes the song home at the end) that just pick this already powerful track up and carries it to new heights.  Even at nearly 8 minutes long, never do I find myself losing focus or drifting away from the powerful beauty of this track, which is my second favorite here.

We are at four-for-four as far as great-to-classic WASP tracks go, and it isn't until "Fallen Under" that we hit even the slightest stumbling block.  The only real problem with this song is the simple, overly repetitive chorus, which seems to drag in spots, making the song feel long at just under 5 minutes, while "Miss You" never drags despite being close to 8 minutes in length, as I mentioned before.

Even this "low point" doesn't hold the album back, as the real powerhouse of the album is up next, with "Slaves Of The New World Order", the best track of a really good set of songs on Golgotha.  "Slaves..." is this album's "Murders In The New Morgue" from Crimson Idol, thunderous drums, powerful chord progressions, and tightly layered backing vocals just feed into the greatness of this monstrous track with such dynamic lyrics as "Hold the tail and feel the thunder/Close enough to smell devil's breath/Between the nails I saved one thief/And ride to hell and lay waste to death" in a clear reference to Christ's crucifixion, decent into hell, and eventual resurrection to destroy sin and death.  Truly powerful imagery matched by an equally powerful performance in the music, again driven by Blackie and Blair's guitar team-up, which draws yet another screaming solo from Blair's axe.

"Eyes Of My Maker" slows things just a bit, while also presenting one of the heaviest moments on the new record, as Blackie presents a song from Satan's viewpoint, with lyrics screaming "Hear me now, from where I rule for now/My pearls before swine/And in that tree, I lied, deceived/Naked I preyed, a snake in the vine/Golgotha's worst, I railed and cursed/And nailed the cross all time/Oooh, by chapter and verse, by God I'm cursed/Cause I can't look into His face, I'm blind".  Potent stuff there, to be sure.

"Hero Of The World" starts off like its going to drift into ballad territory, but in very Who-like fashion, explodes from its bounds about mid-way through the track with pounding drums and a scorching guitar solo, in a way that is reminiscent of some of the best moments of Dominator or Dying For The World.

Album closer (standard versions), and title-track, "Golgotha" is the most overtly Christian song on the album to those who don't seek to dig into the lyrics and their meaning (many people have told me they COMPLETELY missed the meaning of "Eyes Of My Maker"), with such blatant lyrics as "Jesus I need you now/Free me, I'm lost somehow/Oh remember me today/I'm a leper left to hang/Oh, yes, I need you now/Jesus I need you now", but never does Blackie sound like he's PREACHING AT YOU as much as he's EXPLAINING TO YOU where he stands now, what he believes, and how he got there.  Again, truly, truly powerful stuff lyrically from Mr. Lawless, with equally powerful and emotive music to back him up.

Despite the fact that WASP has moved to a smaller, European-based independent label in Napalm Records, the production here is still crisp and clear, yet remains edgy and unpolished, as a WASP album should.  The packaging is a digipack (what are you gonna do???), with a full 12-page booklet which includes all the lyrics (a few typos included), as well writing and production credits, and a little note from Blackie.  There are no band pictures to be found, however, which is a small bummer, but nothing major.  Now, if you were like me and you sprung for the extremely limited edition package, you also got a vinyl single of the Japanese alternate version of "Shotgun" (mine's still sealed), a WASP flag (never opened mine), a picture postcard of Blackie (kinda scary looking, to be honest), a cool WASP necklace (also never opened), and the CD itself, all in a metal can that is roughly the size of a full vinyl album.

I know a lot of people have dismissed WASP as a shock-only band for a lot of years, and, as such, they have missed out on what a truly great songwriter Blackie Lawless is.  The guy can structure a song better than the majority of his peers, and writes rock/metal opera-stylized songs better than just about anyone, in my opinion.  And, long-term fans such as myself, have watched as Blackie has been on a soul-searching mission for several years, and several albums, now, culminating in both Babylon and now Golgotha.  Has Blackie found what he's been looking for?  It would certainly seem so, and hopefully I don't have to wait another 6 years to see where he goes next on his journey of self-discovery!

Not the pinnacle of the band's, or Blackie's, career, but definitely top 5.

Back To Reviews Index
Posted by arttieTHE1manparty at 2:37 PM