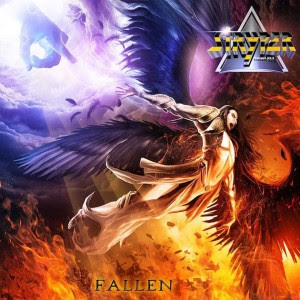 After laying off for so many years, Styper has come roaring back recently, releasing two studio albums of new material, a covers album, a re-recording of classic tracks, and a live album...all since 2011.  And while each has returned to the signature Stryper sound, much more than their previous comeback albums Reborn and Murder By Pride, one thing should be noted about both 2013's No More Hell To Pay, and this new album, Fallen...they are both far heavier than anything Stryper released in their "classic" era.  I'm not saying faster, I'm not saying thrashier...I'm saying these past two Stryper albums have been heavy as stink, and the results have been nothing short of amazing to these ears.

The latest Yellow & Black effort, Fallen, starts off in a powerful way with the monstrous effort, "Yahweh".  The track opens with what sounds to be a massive church choir chanting the word "Yahweh", before the signature Stryper guitar tone launches the song forward and Michael Sweet puts to rest any question as to whether his screams are still able to scrape the upper reaches of his range.  Fast and furious, this driving track set the bar high for the band from the moment the rhythm guitars hit, and it doesn't let up through a tasty guitar solo section, the sharp, thundering rhythms laid down by Robert Sweet and Timothy Gaines, and an interesting use of what can really only be described as Stryper's take on a breakdown at about the 4 minute mark, which adds even further punch to the track.

The title track follows "Yahweh" up very nicely, with a song that sounds very much like a beefed up version of something from the Soldiers Under Command or To Hell With The Devil days during the verse portions of the song, but also finds Michael adding and angry, METAL edge to the screams he uses during his chorus vocals that I don't recall ever hearing in the past.  "Pride" kicks off with guitars that, while still retaining that classic Stryper tone, come off as much more angry and dark than on the previous two tracks, which are a stark contrast to the smooth tenor vocals Sweet utilizes throughout much of the verse work here.  Once again, Michael does allow for some edginess in his vocals on the chorus, but not to the screaming extremes he uses on "Fallen".

"Big Screen Lies" has a bouncy feel to the opening guitars, but not in a poppy way, as there is still plenty of heft to be heard and felt here.  The chorus is particularly tight, with nicely layered vocals, and the drums throughout the song are huge and pounding as they are really given life in the mix here.  Not my favorite track on the album by any means, but one that finds the band headed more in an Against The Law vein than anything else on this record as the whole song has a dirty, almost bump-n-grind rhythm to it.

"Heaven" slows things down a bit, but not into ballad territory by any means.  The verses are largely just Michael chanting the words and Robert wailing away underneath, with Gaines' bass pulsating alongside an understated rhythm guitar, giving this a big, sing along feel.  Think "Soldiers Under Command" merged with "Sing Along Song" from To Hell With The Devil, and you will have a solid idea of how this song is structured and compelling in its presentation.  The chorus is simplistic, catchy, and one that will have everyone in the crowd screaming along "I choose Heaven!"  There's also a really cool, bluesy guitar solo embedded in the track, featuring several nice fret runs.

"Love You Like I Do" is pure classic Stryper, from the big drums, to the tone of the guitars and the solo laid down, to the lead singer verse/backing vocal reply structure the band utilized so well in the 80's.  This track is pure nostalgic bliss despite the fact that it is a brand new song.  "Love You Like I Do" could have very easily slid onto THWTD and fit in lock-step with the tracks from that platinum selling record.  Easily one of my top 3 tracks here.

"All Over Again" finds the band slowing things WAY down, dropping into acoustic ballad mode, complete with big "oooohs" in the backing vocals.  Lighters will pop up if this song is played live, but to be honest, ballads were never what I wanted to hear from Stryper, despite the fact that they are probably the style of song that most 80's fans will remember them for if they weren't into the band as a whole.  After all, "Honestly" received a ton of video and radio airplay and is still the track a lot of people most closely associate with the band's success.  A decent song, I suppose, but far from the best thing here.

"After Forever" picks things up immediately and likely grabs many listeners by the shirt and shakes their faith a bit as Stryper covers...GASP...a Black Sabbath song?!  For those who may not be aware, however, "After Forever" has some extremely blatant Christian lyrics, and the band absolutely nails the heft of this track, especially the crushing drums and the urgency brought forth by Robert, as well as the tandem guitars of Oz and Michael.  Just an excellent version of this song, which, incidentally has been covered by other Christian bands in the past (most notably by thrashers, Deliverance).  Again, one of the best moments on an already excellent album.

"Till I Get What I Want" is the shortest song on the record (and features a blatant grammatical error in the title...but I'll let that slide...).  Fast and furious, to be sure, this song lacks the catchiness that most of the rest of the album contains, and while not necessarily a skipper, it is definitely what I would consider to be the lone "filler" track here and one that could've been left off the record with no negative effect to the overall greatness of Fallen.

"Let There Be Light" sounds like Stryper being played in Dokken style...or maybe the other way around...but it's pretty cool.  Honestly, it feels like someone handed George Lynch a Stryper-tuned guitar, and told him to play along.  Big, layered chorus vocals and a smoking solo complete this track which doesn't necessarily fit the "classic Stryper" mold, but is cool as heck anyway.

"The Calling" gets back to more of the classic sound, again in a heavier fashion than many thought possible from this "hair metal" band.  One of the more "metallic" songs here, "The Calling" would have been a great way to wrap this album up...had it not been for the equally classic, equally metallic "King Of Kings", which lays bare the bands' Christian beliefs and stance, lest anyone forget why, and for whom, Stryper rocks!  Excellent stuff.

The production is, as you would expect from Stryper, big and bold, with a sharp mix, lots of thundering drums, scorching guitars, and tightly layered vocals.  As is also the norm, the Frontiers Records standard for packaging is top-notch, with a 14 page booklet with complete lyrics (minus "After Forever"), writing and production credits, individual member photos, a band photo (under the CD in the tray), and an actual jewel case!!!, along with some very nice artwork and an extensive thank-you section.

As good as No More Hell To Pay was in 2013, Fallen tops it in numerous ways and is a nearly perfect album from this band that has seemingly completely rejuvenated themselves in these past few years.  Hopefully this resurgence continues for the band, as I would say that these last two albums rivals any two-album span the band has put out in their rather long history, including the amazing back-to-back efforts of Soldiers and THWTD.  And that is saying a LOT...

Rating:  A so-so ballad and one filler track away from perfection, still exceedingly crankable, Fallen is a definite 9!