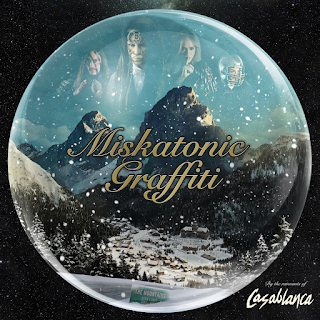 Okay...what the hell is going on here?  This is some seriously weird stuff, folks!  Are we sure this is Casablanca???  Yowza!

Normally, I save my reservations and issues with an album until later in my reviews, but I feel like I need to get right to things here, as to avoid them until later is really ignoring the elephant in the room.  I was TOTALLY blind-sided by "Enter The Mountain" when I popped this in my player.  10:31?!  Are you kidding me?!  Starting off an album with a ten-plus minute long song can be a LOT to digest, especially when the band has altered their sound as much as Casablanca has, especially on this track.  I really thought that perhaps I was reviewing an album by a DIFFERENT Casablanca than the band I had associated with that name before, because this album sounds nothing like the Casablanca I am used to.  I don't even really know how to describe it, stylistically.  There are definitely some melodic metal elements, and a lot of progressive rock, but also some...I don't know..."space rock", maybe; I'm having a tough time coming up with an adequate description.  Part of the problem is that with a song this long, there are movements and changes and crescendoes within the song, constantly changing the feel of the whole thing.  Again, it's not a horrible piece of music, but for me, it's like going to a restaurant and having the biggest, heaviest course of the meal served to you right off the bat, and then having the side dishes and appetizers brought out later.  You are already so stuffed full that you don't know if you can even touch the other stuff!  That's how I felt after "Enter The Mountain".  I had to push myself away from the table for a little bit to let that first track digest before coming back for more.

So, after getting that first track out of the way, how does the rest of the record sound.  It's something of a mixed bag for me, with a lot of the record feeling like Deep Purple meets 70's Alice Cooper meets some trippy, Pink Floyd-esque progressive stuff...and even some Savatage thrown in the mix for good...and odd...measure!    "Closer", which is the lead single from the record, has a lot of 70's-inspired classic rock organ in the sound, as do a few other tracks.  "This Is Tomorrow" throws 70's-styled synthesizers into the mix as well, but that Deep Purple vibe runs deep throughout both tracks.

"My Shadow Out Of Time" slows the pace down, utilizing a throbbing bass line and more layered classic rock guitar and organ, along with a slow-burn of a lead guitar solo, to create one of the most powerful tracks on the record, and one that I would love to hear live as I am betting it could turn into a monstrous jam session in the middle!

"RE: Old Money" feels a bit more 80's in its approach, even sounding a bit like Vain, in my opinion, although never turning the sleaze factor all the way up like that band does on their best material.  I really like the vocal approach on this track, both in the lead vocals and the backing vocals, as well.  Another screamer of a lead guitar solo burns out too quickly, but this is, again, one of the best tracks on the album and one that I hit repeat on more than a few times.

"Sister" is a bit of an oddity (on an album end-capped by oddities), as carries a Red Rider-meets-U2 vibe, in my opinion, sounding very much like it could have been a song auditioned for the Lost Boys soundtrack back in the 80's.  I like it quite a bit, but it was definitely a grower for me, as I really wasn't quite sure what they were going for with this the first couple of times.

"Name, Rank, Serial Killer" drops some punk into the sound, along with a bluesy slide guitar, that really makes me think of bands like Junkyard, or maybe even Dogs D'Amour.  A quick, sassy number, that is the fastest track here, this is probably the closest the band comes to their sleazier, grittier sound from their first couple of records.

The title track has Zeppelin all over it, stylistically, with a galloping rhythm and some haunting, ringing guitar parts, but without Plant's high-end yowl, and then things slow completely back down to "She Was The One", which returns to that classic 70's vibe that is so prevalent throughout the best parts of this record.  A bit Zeppelin, a bit Floyd, and perhaps even a bit theatrical Alice Cooper, this track really closes out the best portion of the record in fine fashion, and is where I wish the whole project would have ended, with a final fade-out of the nicely 70's toned guitars, or perhaps a dying wail from Ljung's powerful rasp...but, sadly, it is not to be...

...because the album gets back into Bizarro World again with the nearly 9 minute-long closing track, "Exit The Mountains".  Actually, this is a better song than "Enter The Mountains", largely because of the parts that have something of an 80s Savatage feel to them, but again with that Deep Purple vibe mixed in as well.  The problem (well, one of the problems) is that this song has SO MANY parts it's just a bloated mess.  Perhaps if "Enter The Mountains" and "Exit The Mountains" were broken up into individual tracks, so that you could skip the spoken parts, for example, I could better handle more of this record.

I don't know...I honestly don't know if I have the energy to sit through this epic thing many more times in my life.  It's not that it's bad, as the musicianship is definitely there.  It's just so dang BIG and demands so much attention that I struggle with it each time I put it on to play.  It's exhausting to me, to be honest.

Oh, and yes, I know the backstory of the album here, being based on H.P. Lovecraft....but that really does nothing to take away from the immensity of this album.  It actually adds to it, making it all that much more difficult to absorb in one sitting.  It is an amazing effort put forth by the band, no doubt.  It's just not one that I think I can do again, at least anytime soon.

There are two ways to look at this record.  You can look at it as a complete concept project, which I prefer NOT to do...or you can look at it as tracks 2-9, which constitute a darn fine retro rock record, with about 20 minutes of wasted space at the front and back of the record.  That is how I choose to perceive the record, and, in fact, I kept all of the middle stuff and dumped the first and last tracks when I ripped the record to my iPod, as I do REALLY like the mid-section.

Rating:  Rock this at 6.5 as an entire project, if simply for the musicianship on display here, and the sheer scope of the record.  However, if you get rid of the first and last songs, and absorb this as more of a classic rock-inspired album, I could see cranking it to 7.5.


Back To Reviews Index
Posted by arttieTHE1manparty at 8:27 PM