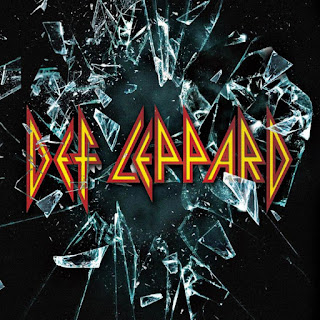 Here we go...another Def Leppard album, and another wave of people clamoring for the band to repeat either Pyromania or Hysteria...or AT LEAST Adrenalize...and another letdown for that group.  Sure, there are nods to the past scattered throughout the album, and yes, the band puts forth their most complete record since the much-maligned X album, but a full-fledged return to the glory days is simply not in the cards for this band, nor do I think it is necessary.  But does Def Leppard at least leave fans hopeful that the band can continue to be at least viable as something other than a Summer-Retro-Tour headliner (no matter what the band claims about themselves)?

Before I answer that, let's just get the bad stuff out of the way...the stuff you are likely to hear or read in just about any review you come across.
Now, there are several good things about this record, as well.  For starters, the band remembers what got them this far in their career in the first place:  anthemic arena riff rockers and lighter-in-the-air ballads.  Whether you are talking High N Dry, Pyromania, Hysteria, Adrenalize, X...or even total hit-and-miss records like Euphoria...or TOTAL miss records like Songs From The Sparkle Lounge and Yeah!...Def Leppard has always had one or two true arena rockers to get people out of their seats and thrusting their fists in the air, and a ballad or two that will either have those same fans reaching for either a Zippo or a handkerchief.  It's who they are; it's what they do...and they know it's what you want them to play.

Nowhere is this more evident than in the lead single, "Let's Go".  Joe's voice comes buzzing in accompanied by computerized effects to kick off this Hysteria-esque track which blatantly lifts its main riff from "Pour Some Sugar On Me", drops in a thumping bass line, and utilizes a catchy, hooky chorus of "let's go-oh-oh-oh-oh" that sits squarely in Elliott's vocal wheelhouse.  Talk about a total nostalgia tease of an opener!  My one complaint is that all throughout the song I do find myself saying, "yeah, come on...let's go!  Get this thing going!", as it seems to plod along in places where I wish it would just totally rock out! (see complaint #4 above)

Want more nostalgia?  Follow-up track, "Dangerous" feels like it is just a production updated version of a song that could've been written for Pyromania.  The guitar riff just screams 1983, and the layered backing vocals, which have always been one of the strong suits of this band, are nearly perfect here on one of the top 10 songs this band has put out since Adrenalize.  It really is that good.

"Man Enough" also elicits a nostalgia trip like just about no other song on this record...but its a trip to "Another One Bites The Dust"-era Queen, not to anything Leppard has done.  This song so blatantly rips off the bass line and overall feel of "Another One..." that I would guess Freddy Mercury is up and dancing somewhere every time this track rumbles to life!  Really, this is a dang cool track that gives me hope that this album can sustain the band's future by plumbing the past, even if its not THEIR past!

"We Belong" is another straight-from-Hysteria number, very similar in style to that album's title track.  Thick with layered backing vocals, a throbbing bass line, and what can only be described as "lush" guitars, this track is exactly what Def Leppard did so extremely well at their peak of success.  This would've been ALL OVER MTV in the late 80's, and is easily one of the best tracks on this record, as far as I am concerned.  In fact, these first four songs are all top-drawer stuff for those seeking a return to the old Leppard.

"Invincible" starts off with a simple bass line, before transforming into a pretty good mid-80's New Wave song that would make Duran Duran or Simple Minds proud, musically.  Vocally, the song is pretty bland, really, with no dynamics to Joe's voice during the chorus...I would actually go so far as to call it rather monotone, to be honest.  While not a brutal track (think most of Sparkle Lounge for my idea of brutal Leppard songs), this is, in tracking order, the first of a handful of songs I would've left off of the record, or recorded as bonus material.

"Sea Of Love" recaptures a bit of the Ret-Leppard (see what I did there?!) feel, as the vocals don't feel as processed and the guitars are a bit grittier than in several other places on the record, yet the backing vocals are as tight and harmonious as ever.

"Energized" is one of the tracks I mentioned in negative point #4...totally mis-named!  This song is downright boring to me, with looped drums, synth effects, and a mid-tempo approach that is anything but "Energized".  I know a lot of people list this as one of the better tracks on this record, but I would say that this is the second track I would leave off.  It just does nothing for me, although Joe's voice does sound particularly comfortable here, with little strain detected as he tries to climb the scales just a bit.

"All Time High" takes the band retro again, but this time they jump on the KISS "Rock N Roll All Nite" bandwagon, pretty much copying that classic tune's main guitar riff, tempo, and basic drum rhythm, before adding in a Leppardized chorus and hook.  The funny thing is, I'm not even turned-off by the sonic theft here, as "All Time High" is a really good song, and the one I actually would've probably closed the record with if I had a hand in the track sequencing.  Good stuff, even if it's not overly original.

"Battle Of My Own" has a swampy, acoustic blues style that I struggled with when I first heard it, but repeated listen's have bumped it up slightly in my opinion.  I don't like the synthesized effects used on some of the vocals here, but this isn't an automatic skipper for me, by any means,

"Broke N Brokenhearted" is one of the catchiest songs musically, but again, it feels more like a 70's KISS song than a Leppard song, right down to the ridiculous lyrics that are little more than forced rhymes in places.  I mean, come on...tell me that lyrics like "You ain't flash, you're talkin' trash/And you hit me like a caffeine crash", aren't straight outta the KISS Lyrical Writing Bible!  Or when they aren't forced rhymes, they are simply ridiculously Gene Simmons lines like, "who's been sleeping in my bed?  I'll huff and I'll puff and I'll blow your playhouse down!".  I'm actually laughing to myself as I type these lines out!  But again, I'll give it a pass because the grin I get from listening to these silly lines, along with the strong guitar riff, are enough to keep the track rocking along.

"Forever Young" is pure filler, in my estimation.  Totally cliche in it's lyrical content (as you could likely guess by the title), and not really that interesting musically, it is 2:22 that really has no reason for being on the record.  Even with it being so short, I'd have left it off the record.

"Last Dance" finds the band seeking one of those Zippo moments I alluded to earlier, but this is definitely not their best ballad effort by any means.  In fact, it's kind of boring.  Not bad...just not memorable.  It reminds me of Poison's "Every Rose Has It's Thorn" in the way it is structured, but doesn't have the emotional punch, or the nice electric guitar solo, to overcome the acoustic set-up here.  I'd drop it...

"Wings Of An Angel" is straight off of Pyromania with its guitar riff, reminding me a LOT of "Billy's Got A Gun" during the verses, mixed with Leppard's version of "Rock On" in the way Joe handles the verse lines, before building to a really nice, punchy chorus with those killer Leppard harmonies ringing in.  A strong guitar solo and those big, thundering Rick Allen drums round out one of the three or four best songs here.  While normally I wouldn't bury such a great song so late in a record, it does help to even out the second half of this release, which has had few real strong moments.

"Blind Faith" closes out the record and finds the band going quasi-Beatles on us.  I'm not sure what to think of this song, to be honest.  On the one hand there are these odd woodwinds mixed into the simple snare-and-bass drum cadence and feedback-free guitars, which, like I said, is totally reminiscent of something the Beatles did on their classic Sgt. Pepper album.  But then the song kicks in at about the 4:30 mark, and for about a minute we get a glimpse of classic Leppard again...including Joe really reaching for a high note that he comes so close to nailing.  Would I keep it?  Yes, but I wouldn't have closed with it, as it leaves the band going out with a whisper and a fade rather than on a ringing guitar note, which is why I would've closed with "All Time High", as I mentioned earlier.

This is the first time Def Leppard has strayed away from Mercury Records to record an album, and while I'm not sure whose idea that was, I'm betting Mercury wishes Leppard was still with them, as I am sure this album will likely sell quite well.  Even being on a small label, the production is solid, as one would expect from a Leppard record, and the individual performances are overall really easy to hear in the mix.  The packaging is also top notch, with a full booklet with all the lyrics, numerous band photos, production credits, writing credits, and a thank you section.

Best Def Leppard record ever?  No, not even close to the first 4 records (On Through The Night, High N Dry, Pyromania, and Hysteria).  Better than the last 4 records?  Definitely better than Yeah!, and Songs From The Sparkle Lounge...probably better than Euphoria (although that has a couple of killer songs on it), and just a step or two behind X (which I love, even though a lot of people hate it).  And, if you took at least three, and as many as five, songs off of this record, I think it may be a more solid album than Adrenalize but without the real high points from that record.

So...back to the question I left you hanging with in my opening paragraph:  does Def Leppard give fans hope for the band?  More of a Def Leppard album than Slang was ever accepted as being, generally less pop than X, and considerably less crappy than Songs From The Sparkle Lounge, I think most people will say that Def Leppard is Def Leppard being Def Leppard, which is exactly what most people want....right?

Rating:  Rock-worthy, for sure...which actually surprised me a bit!  I actually considered giving this a crank-worthy 7, but then settled on 6.5 simply because of the things I would've left off.  Sometimes more is simply more, and this album could've used a bit less.  All in all, a very good return for the Brits, however!

Posted by arttieTHE1manparty at 4:44 PM