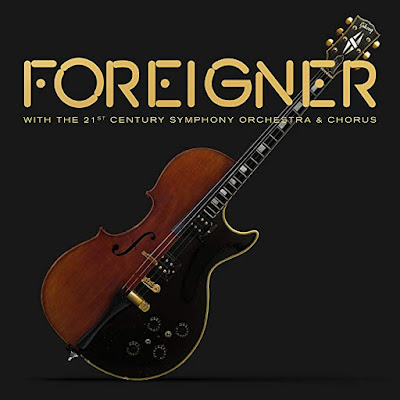 Okay, enough of this, already.  This "Live! With Whatever Orchestra Behind Us..." thing needs to stop.  What was a pretty unique idea at one time has become a tired, predictable, obvious money grab for bands that are simply rehashing their classic material and repackaging it for the umpteen-thousdandth time.  And now, one of my all-time favorite bands, and one of the true classic rock legends of the 70s and 80s, Foreigner, has made the leap into the arena of shameless pandering that has been mislabeled as musical artistry.

As poorly executed as I feel Asia's similar attempt was a couple of years ago, Foreigner's effort here may be worse, as for the vast majority of this CD/DVD combo, you basically can't even tell the orchestra is playing...which is pretty darn hard when there are more than 60 members of the choir alone!  The arrangements on most of these songs haven't been altered significantly, so in most cases, this comes off as simply another live album of the standard Foreigner concert setlist, with basically no surprises at all, other than the lack of "Hot Blooded" and "Head Games" from the CD track listing in favor of  "When It Comes To Love" and "Fool For You Anyway", which is a very poor trade-off.

Sure, there are a couple of interesting takes here, most notably "Say You Will", which was modified to incorporate an extended flute solo intro and an acoustic, Flamenco guitar style which actually works pretty well, especially since this is one of the few times you can really hear the backing choir being used to any large degree.  But, what this song also does is really exposes Hansen as merely a good vocalist, and not the powerhouse that Lou Gramm was in the band's heyday.  Hansen has vocal talent, no doubt, but he lacks the soul that Gramm possessed, and on songs such as this, or the symphonically enhanced "Waiting For A Girl Like You"...or especially on "I Want To Know What Love Is", he just lacks that "it factor" that Gramm had in spades.

The choir is given a couple of chances to shine, most notably on the big intro to "When It Comes To Love", which made me feel like I was walking into an ancient, epic cathedral, and again on "That Was Yesterday", which is one of my favorite Foreigner songs of all time.  Unfortunately, on "That Was Yesterday", the intro drags on and on, and with the addition of the symphony's trumpets and other brass, it sounds like a Chicago song, not a Foreigner classic.  And, again, Hansen's vocals, which have grown huskier over the years, do not hold the power and passion that Gramm's did.  Anyone who says otherwise is lying to themselves, plain and simple.

That really brings me to my final point about this effort.  Foreigner is, sadly, no more than a cover band...a tribute to iteslf...at this point.  Yeah, yeah, Mick Jones owns the band's name and was the founder, blah, blah, blah...but come on.  With only one studio album in the past decade (2009's solid-yet-unspectacular, Can't Slow Down), but seemingly limitless amounts of repackagings, live albums, remasters, acoustic albums, and now a symphonic rendering of classic hits, Foreigner is far more of a cash cow milking machine than KISS could EVER be accused of being.  Seriously.  The band has released exactly nine studio albums (7 with Gramm), but has managed seven live albums (only ONE with Gramm), and more than 15 compilation albums/hits packages.  At what point does humility kick in for Jones?  My guess is never, and the band is once again out on tour and will likely be showing up at a county fair near you very soon.

The tracklisting here is decent, aside from the couple of massive hits on the DVD that didn't make the CD set, and the CD has a lot of crowd fade-ins and fade-outs where songs were obviously moved around.  I honestly don't understand the reasoning for this, as I don't see how it could have made that much difference.  There is very little interaction with the audience here, but the crowd is enthusiastic in their response to several of the performances here, so I guess they enjoyed what they were hearing.  The band's performace is solid, but their stage presence (yes, I actually watched most of the DVD, which is uncommon, but, Foreigner is a favorite of mine...) is pretty stoic for the most part, without a ton of activity.  To be fair, this has largely been standard for the band in live shows for the past decade or more, also, although Hansen usually is a bit more animated live than he was on this DVD set.

So, is this newest effort worth picking up?  If you are looking for a live album from this version of Foreigner, I would say stick with 2014's Best Of Foreigner 4...And More.  If you are looking for live renditions of the BEST version of the band, you would have to go back to 1993's Classic Hits Live (also packaged as Best Of Live).  And if you wanted the best versions of most of these songs, I'd just get 1992's complilation, The Very Best...And Beyond.  But, for me, much like Asia's Symphonia effort from last year, there is little in the inclusion of an orchestra and chorus that makes much difference in the overall sound of most of the material here.  At least with Asia, that live album would, sadly, be the last time the band would record with John Wetton, and 3 of the original 4 members of that band were on board for that band's release.  I guess I just don't see any reason to own Foreigner With The 21st Century Symphony Orchestra & Chorus unless you are an absolute completist who just has to have everything this band...regardless of who is in it...puts out.

Rating:  Musically, not horrible, but not executed to its fullest pontential.  Rock this at a 6, but seriously, there is no reason to spend the money on this set.

Back To Reviews Index
Posted by arttieTHE1manparty at 11:46 AM