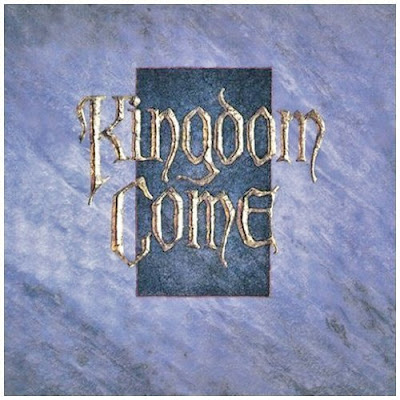 Man, thirty years.  It is so hard for me to belive that it has been thirty years since this album was released to much critical acclaim...and even more criticism...from the music media and fans, as well.  For those who may have somehow missed this album (as well as the follow-up, In Your Face), the German band Kingdom Come was about as close to a reworking of Led Zeppelin as anyone had heard at the time, so much so that they were frequently referred to as "Kingdom Clone", and lead vocalist, Lenny Wolf occasionally touted as "Zeppy Wolf" in places.  Jimmy Page even went so far as to accuse Kingdom Come of musical larceny, being quoted as saying, "...when you've got things, like Kingdom Come, actually ripping riffs right off...". To be fair, there are definite similarities, no doubt, but its also somewhat unfair...and unfortunate...that the band is most remembered for those similarities, as Kingdom Come is actually an extremely talented band with some great songwriting skills and top-notch musicianship, not to mention Wolf's incredible range and power as a vocalist.

Released during a time when people were seemingly ALWAYS clamoring for a Zeppelin reunion, Kingdom Come was exactly what people wanted, but the band was absolutely lambasted for it.  The band, for their part, tried weakly to distance themselves from the backlash, claiming The Beatles and AC/DC as their actual musical influences, not Zeppelin.  And, to be fair, you can hear AC/DC in this album, but not in the aggressive three-chord rockers that many people think of when they think of the Aussies.  No, the most AC/DC moment on the record would actually be on the darkly bluesy, laid back balladry of "What Love Can Be".  Definitely not a power ballad, this smokey track was featured in a video on MTV's "Headbanger's Ball" and actually managed to garner some fairly significant airplay as a second single from the record, just missing the Top 25 on Billboard's US Mainstream Rock Chart.  Sure, Wolf still has a Plant-like quality to his vocals here, but to me this song has more in common with AC/DC's "Ride On" than it does with Zeppelin.  See what you think.

That song was something of an outlier, however, as most of the the rest of the album has an undeniable-and-delicious Zeppelin style and sound, right from the start (the album closer changes things up a bit, also).  The album's opener and third single, "Living Out Of Touch", came out of the box riffing like Page and thundering like Bonham, with Lenny Wolf howling to the moon like Plant on Zeppelin's best material.  Fans of 70s classic rock would likely get the sense that they had heard this song before because it has such a meaty, catchy riff, but the punchier, beefier production supplied by producer Bob Rock gives the track, and entire record, a bigger sound than Zeppelin ever produced, in my opinion.  When an album starts out this big and this good, I'm always ready for the let down, but thankfully, it never came.

"Pushin' Hard" blasted to life with a big drum intro and a bluesy riff, then backs off a bit to give Wolf room to work his vocals atop a relatively sparse verse section before building back up through the chorus sections.  A really cool guitar solo is incorporated here, changing the pace up a bit as it slips and slides through a bluesy interlude, and Wolf's screams reach rafter range in places, making the album two-for-two from the outset.

Of course, the song most people remember from this album was the hugely  successful "Get It On", which was about as Zeppelin as it could get.  A big, riffy intro, a bass line that sounds like John Paul Jones may have been playing it himself, and even a drum fill that has Bonham screamed with every thump.  And Wolf, who completely channels his inner-Robert Plant, delivers such a smooth, solemn vocal turn on the verses, and some massively wailing screams on the chorus, makes it immediately clear where the comparisons come from.  The song charted Top 10 on the US Mainstream Rock charts, and Top 70 on the Billboard Hot 100, which helped propel the album to go Gold the day it was released (it has since gone Platinum, with over a million albums sold).

There are still more great tracks on this album, with my favorite album cut being the killer, underappreciated rocker, "17".  The track kicks off with a big, crashing drum intro, then bleeds into an excellent guitar lead that is part Led Zeppelin, part Pearl Jam (seriously), with the twin guitars creating a fuzzy, grungy swirl that evolves into a Zeppish riff that disappears completely, leaving Wolf and Kottak's drums...and a fat bass line from Frank...to carry the verse.  There is a massive, extended guitar solo that lets Stag really get expressive and soulful in a seemingly unlimited, unrestrained run of awesomeness!  Not to bog you down with video clips, but give this track a listen and see if you don't see where I am coming from with the Pearl Jam (think Ten era) reference.  Perhaps THEY were ripping off the rip-off band (only kidding).


I get that I am a huge early Pearl Jam fan, but seriously, couldn't you hear Eddie Vedder coming out of that guitar riff at the intro just as easily as you hear Wolf?  That's some great stuff right there, folks!

"Loving You" takes things back down to ballad territory.  This song was also released as a single and video, but by the time it was out, people had really started buying into a lot of the media backlash and Kingdom Come was starting to struggle to get airplay with anything but "Get It On".  This song, written by lead guitarist, Danny Stag, has a largely acoustic feel to it, but features an excellent string-bending solo, and the track also really allows Wolf to extend his vocal range and inflections.  Again, I get the Led Zeppelin references, but I have never heard anything from Zep that grabs me like this does.  I apologize for the less-than-stellar quality of this video, but it was the best version I could find of the official video release.

A couple of sleepers hang out at-or-near the end of the record.  "Hideaway" has a dark, wicked vibe that weaves its way throughout the track, and Kottak's drums are just spot on perfect here.  My only "complaint" would be the really long build that leads this track in; I just kept waiting for the dang thing to kick in!  When it finally does, it is a strong track, especially musically.  The lyrics are pretty simplistic and definitely not the best on the record, but the long guitar solo from Stag, and the overall cool feel of the track makes it a nice addition here.

I also really enjoy the album's closer, "Shout It Out", which strays the farthest from the Led Zeppelin sound on this record, and has more of a straight-forward 80s hard rock guitar riff, with Wolf taming his vocals down considerably.  With its placement at the end of the record, it doesn't stick out as being starkly different, but when taken in into consideration with the rest of the album, there is a definite difference in sound and approach, but it works well and, for me, left me so ready for the next album to come!

I remember buying this album when it first came out, and I loved it right from the start.  This is a rather odd thing for me to say, however, as I have never hid from the fact that, as a whole, I don't like Led Zeppelin all that much.  Sure, there are some monstrous songs with huge Page riffs and Bonham's amazing skills and that rumbling from below that was John Paul Jones, but so often, I couldn't wrap my head around the band's more jam-session moments, their weird, moody interludes, and, more-often-than-not, Plant's yowls, which often seemed out of control and relatively out of place with the rest of the song.  As such, a "Best Of Zeppelin" album is more than plenty for me, and I'd probably argue with the inclusion of three or four songs on such a release.  But with the first two albums from Kingdom Come...and in places on the next two or three records...I found what I really enjoyed from Zeppelin without having to wade through the things I didn't care for.  To this day, I own three times as many KC albums as I do LZ (6 to 2, for those counting), and this debut is the main reason why.

If you have never heard this record, either by accident or specifically due to the criticisms leveled at it, do yourself a favor and change that decision and pick this record up.  Even thirty years later, Kingdom Come is an excellent record with so many amazing riffs and hooks that even the couple of filler tracks come off as better than most of the cookie-cutter stuff that was starting to jam the airwaves by late 88 and early 89.

By the way, the band is back out on tour to support the 30th Anniversary of Kingdom Come, the record, and will be playing the record in its entirety when the band is headlining.  Posted dates so far are all in September and October of 2018, so there is time to make your travel plans.  Lenny Wolf is NOT with them (he did grant the band his blessings, he just doesn't apparently want to tour any longer), so I am kind of torn here.  Part of what I love so much about this record (and, really, the first four KC records), is the music, so with Stag, Kottak, Frank, and Steier all on board, I have no doubt the music is going to be amazing.  The fill-in vocalist is Keith St. John, who has worked with Montrose, Burning Rain, and Lynch Mob.  St. John has a strong voice, to be sure, but he has a lower register than Wolf and is not overly comparable to Wolf, at least on material I have hard that he has performed on.  I will be curious how the revamped Kingdom Come 2.0 sounds live, but if given the opportunity, I'm pretty sure I would jump at it.  You can keep up with the band here.

Rating:  Time has been kind to this album, unlike many 80s releases, and it is still as crankable today as it was all those years ago.  Crank this to 8.