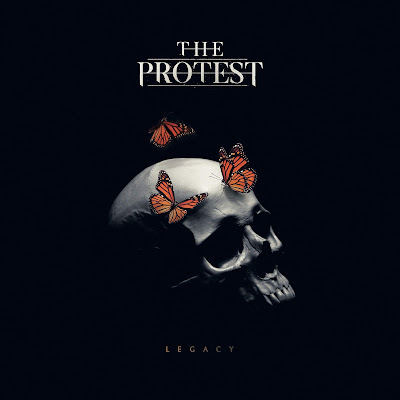 Indiana quartet, The Protest, return with their third studio album, and first for RockFest Records, with Legacy.  After achieving a degree of success with their previous album, Great Lengths, which featured several Christian rock radio hits, the guys upped their game noticably on Legacy, incorporating a more melodic approach on several of these tracks that was not present on the previous two albums.  Yes, the music is still hard-hitting modern rock with crunchy guitars and punishing drums, yet there is a melodic quality to the music, and especially the majority of the vocals, which find Josh doing more singing and less screaming than on previous albums by The Protest.

Right from the start, it is obvious to me that The Protest has matured, not only as musicians, but as songwriters.  Some excellent production work has helped bring out a fuller, heavier sound, especially on the bottom end of the drums and the rhythm guitars, as well as some awesome bass work, and the backing vocals are much stronger here than in the past.  All of this is evident even in track one, as "Valor" is a more complete song than even the best material on the band's previous two releases...both of which I really enjoy.  But the focus on cleaner singing from Josh is a huge maturation point for The Protest, and I think it will reap big rewards for this band.

The next track up, "What Else You Got" is an absolute gem of a melodic rocker.  Huge, arena shaking drums intro the track, and support each of the pre-chorus sections, in a BOOM BOOM CRASH style that will have fans stomping and clapping along, without doubt!  The interplay between the lead and backing vocals on the chorus is excellent, Sadler absolutely lays into a tasty, melodic solo, and the simple-yet-catchy chorus all combine to create what I am sure will become the band's signature anthem, and a absolutely screams WWE PPV theme song! Already impacting both mainstream active rock and Christian rock charts, this is a huge song that should propel the band through the summer on rock stations across the country.  Call and request it; you won't regret it.

"Knockout" finds the band reverting a bit back to the style they used on their last album, incorporating a bit more speed and some harsher, more screamed vocals in places, but the songwriting is still more complete than on albums past, and the fullness of the sound can't be overstated here.  Punchy, catchy, and chantable, "Knockout" is another one of the new songs that I am sure will cause quite a stir if given a shot in live settings.

"Straight From The Barrel" features some excellent, edgy guitar work from Sadler and Colwell, with the former dropping in a cool-if-short fret run of a solo, and Jarob Bramlett's drums are absolutely pounding here.  Josh uses both his clean and screamed vocals here, sounding at times very much like the guy who belted "Rebel Static" on the last album, but also mixing in a more restrained, more singing style of vocals.

"Take My Heart" slows things down quite a bit, although it doesn't begin to approach ballad territory, and really showcases that melodic side I have referred to several times.  This is the side of the band that I was always waiting for, to be honest, and is the type of song that I think could make an added impact at radio, as it shows the band is not just a one-trick pony...albeit, an angry, aggressive one-trick pony.  Make no mistake, this song still rocks, but it just does so in a cleaner way than the band has presented in the past.

"Noise Revolution" picks up the pace a bit, but continues to find Josh exploring a more melodic singing style.  Lyrically, parallels could be drawn to "Rebel Static", I suppose, but the songwriting, once again, is more complete here, with a catchy groove running throughout the track, Jarob's drum line keeping the track driving along, with layers of guitars and vocals adding a depth that wasn't often found on previous efforts.  To me, this sounds a lot like the band's personal version of Skillet's "Sick Of It", in it's style and approach and groove.  Excellent stuff, to be sure.

The title track, "Legacy", is pure, adrenaline-fueled metalcore at its finest, and I find myself literally skipping back to this track over and over and over again.  The sheer aggression in this track is something that I have not gotten from a band in quite some time, and "Legacy" has to be a contender for song of the year at this point.  I have listened to this track alone no fewer than thirty times in the short time I have had this album, and it has yet to fail to deliver for me.  The combination of Josh's harshest screams, his brother's massive drum sound, the guest bass rumblings from Arcaini (who also produced the record), and the twin guitar attack of Sadler and Colwell absolutely crushes this song that instantly found its way into my workout mix.  For fans of the band, think "Vicious Cycle" on steroids...including the 'roid rage!  Wow...just absolute perfection if you are into this style of music!

"Stitched" hits almost as hard as "Legacy", but not with as much speed and cleaner vocals, for the most part. Josh dials the angst down a notch here, returning to more of a singing voice, but the intensity of the band continues. The down-tuned guitars swirl and churn, and Jarob's drums are so lively and punchy that you can actually feel the pedal hit every time he kicks.  A core-ish breakdown blasts the listener through into the final chorus, and with back-to-back heavy-hitters, the listener is left nearly breathless.    That's unfortunate, as "To The Death" ramps things up even further, with Josh returning to a screamed vocal style for the verses, while sing-shouting his way through the chorus sections and the bridge.  Again, a punishing breakdown section will have a mosh pit stirring up instantly before an almost sweet-sounding vocal leads the band into the final chorus which blisters its way through to a dead-end stop.

The album's closer is another excellent rocker, combining the band's newer, more melodic approach, with the style and sound of their last album.  Again, Jarob threatens to steal the show with his huge drum sounds, while his brother keeps things largely on the clean side, vocally, ith the only exception being some distorted, almost spoken-word sections leading immediately into the choruses.  The song is rather unique, really coming across as two different songs combined into one, with the "Bad Self" section being a modern hard rocker, while the "Ascension" section is a beautiful, yet still heavy, instrumental section that really showcases the musicians' skills, especially on guitar.  I think this is a key point for the band, as many listeners, especially those who sample the album and hear only the crushing breakdown sections, may be of the opinion that Sadler is incapable of a big soaring guitar solo.  The "Ascension" section of this track should lay those misguided beliefs to rest.

Never a band that openly beats the listener over the head with chapter and verse Scripture, The Protest still manages to make their faith very well known throughout the record, with Josh screaming to the listener about the "King of Kings" in the title track, and with a sense of positivity laced throughout each of these songs.  I am anxious to get my hands on a copy of the lyrics for these songs so I can dive even further into the meanings of everything here.

While I thought Great Lengths was a solid album with several really good songs, Legacy pretty much blows its doors off in ever possible way.  If this album doesn't break huge for The Protest, there is simply no justice in the music world now, as this is one excellent record from start to finish.  Granted, this style of modern rock is not for everyone, but for those who like it hard, heavy, fast, loud, aggressive, and with a semblance of melody mixed in, Legacy may be exactly what you are looking for!

Rating:  Incredibly crankable!  Twist this all the way up to 9 and LEAVE IT THERE!!!

Back To Reviews Index
Posted by arttieTHE1manparty at 7:56 PM