THEORY (THEORY OF A DEADMAN) "Wake Up Call" 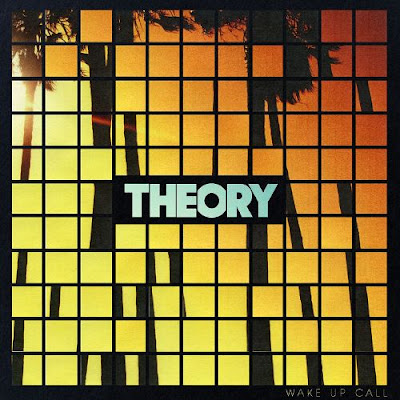 Theory Of A Deadman returned late last year, right on schedule with their "every three years means a new album" routine.  Being a huge fan of the band, particularly their massively popular albums, Scars & Souvenirs and The Truth Is..., as well as their less-welll-known-but-equally-fun, Savages.  Sporting the same line-up since 2009 (with Connolly, Brenner, and Back all being around since the beginning), it was a little odd to me that the band decided to shorten their name to just Theory this late in the game, but whatever; if you know WHO and WHAT you are getting, a simplified name is of little consequence.

But the problem is, despite knowing WHO you are getting, there is likely no way fans picking up Wake Up Call could have been prepared for WHAT they are getting.  Because, while in "theory" this is the same band, in factuality, this new Theory is NOT the Theory Of A Deadman that I had come to love.

It is tough for me to write this, because I really do love this band.  Their irreverant attitudes, the catchy, snarky, hooky, driving rock that straddles the line between the sleaze of the 80s and 90s and the modern rock of the 2000s, the emotion that Connolly manages to pour into the ballads, the stage presence...and Connolly's pompadour...were all a part of the package that was my Theory Of A Deadman.  But it seems that with this new Theory, all that remains is a little of the snark, most of the vocal emotion...and Connolly's pompadour...because the driving energy, the sleaze...heck, the ROCK...is virtually gone from this new album.

Eleven tracks long (and I do mean loooonnnngggg), Wake Up Call is pretty much an IV drip of boredom, lulling the listener into a musical stupor, only occasionally managing to fight off the haze long enough to see the band-formerly-known-as-Theory Of A Deadman in the distance.  Ironically, one of the best, most T.O.A.D. songs on this new record is a song about America's opioid addiction problem, the tongue-in-cheek "Rx (Medicate", which was the first single from the album.  This is one of the places where the snark I mentioned before can still be found, and there is a definite smirk on Connolly's face when he sings/raps/scats, "Your friends are high right now, your parents are high right now, that hot chick's high right now, that cop is high right now, the President's high right now, your priest is high right now, everyone's high as f**k right now, and no one's ever coming down", yet there is also a knowing understanding in the social commentary he is making.  I remember hearing it on Octane one day, and instantly I knew it was Theory Of A Deadman, despite the looped drums and the Spaghetti Western-sounding whistling at the beginning of the track.  And yes, it's a dark topic, but its a fun song for some reason, and its catchy as all get out.  This is MY Theory Of A Deadman, but sadly "Rx (Medicate)" is one of only three or four places that I find myself enjoying Wake Up Call.

I actually had high hopes when I popped the disc in for the first time, as the opener, "Straight Jacket", has a fun, bouncy sound right from the start, with Connolly dropping some piano into the mix alongside his instantly recognizable vocal phrasing and some rocking guitars, especially on the chorus section.  To top it all off, the band plays to their strong suit with smile-inducing, quirky lyrics that manage to weave Nancy Kerrigan and Tonya Harding, Tesla, Lloyd Braun, and  Mary Poppins (try to say "super cala pessimistic, expiala narcissistic" several times fast) into the narrative.  No, its not the hard-charging rocker that "Bad Girlfriend", "Little Smirk", or "Savages" is, but its definitely Theory Of A Deadman, which is what I was hoping for.  Following this is "Rx (Medicate)", and then its not until track six, "G.O.A.T.", that the band even attempts to become Theory Of A Deadman again, and only one other time...on the closing track...a cover of Chris Isaak's "Wicked Game", no less...do I actually enjoy what I am hearing.  Connolly, by the way, NAILS "Wicked Game"; its worth checking out (but I think I still prefer the Emperors And Elephants cover...maybe).

That's really it.  Four good tracks total, the first two and then two of the last three, that make this anything even remotely resembling a T.O.A.D. album.  The rest of the album sounds like a Connolly solo record, as there is no getting around the vocals being all him, but the rock is all but missing.  Yeah, there are some great, insightful, introspective lyrics, but that means nothing without the sound of the band.  "Echoes" is okay, I guess, and rocks to a degree, but it sounds like Connolly singing a Pink song, not like a Theory Of A Deadman song, and "Glass Jaw" has flashes of T.O.A.D...albeit with too many odd electronic elements to it...but that's it.  On the rest of the album, the guitars are usually so buried in the mix they are virtually gone, and half the time the drums sound programmed, rather than played. I have no clue what is going on in the song "PCH" with its weird electronic effects, and the rest is either slow, schlocky dreck or overly-polished, happy pop that I can't get into.  To quote one of the lyrics from "Rx (Medicate)", "I am so frickin bored..." when I listen to Wake Up Call, that I just ripped the four useful tracks into a playlist of my favorite stuff from the band, and got rid of the CD.

Wake Up Call is an interesting title to an uninteresting album, only because I feel like a wake up call is exactly what I needed for most of this record.  Without a "Lowlife" or a "Blow" or "So Happy"...and definitely no "Bad Girlfriend"...there is little to bolster this record, and nothing to buoy it in my ratings.

Rating:  Hard as it is for me to say this, I recommend turning Wake Up Call down to a 4.  Grab ANY of their first five records instead if you want the REAL Theory Of A Deadman.

Back To Reviews Index
Posted by arttieTHE1manparty at 11:39 AM