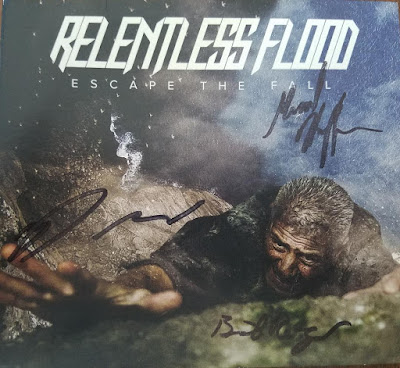 Four years has passed since Relentless Flood's last album, The Time Is Now, which proved to be something of a breakout effort for the melodic modern rockers.  Since that time, the band launched an Indigogo campaign to fund a new album, resulting in this latest effort, Escape The Fall.  A few things have changed with the band since The Time Is Now, with the chief difference being that the Huffman father/son combination has been reduced to just the son portion, as dad, Dale, has taken on a supporting role, co-writing most of the songs on the album, and Bret Rodgers has stepped up to assist on guitars, as well as bass.  Marshal has stepped out from behind the drum kit and has also picked up a guitar, adding that to his frontman repertoire, and Dylan McLain has been brought in to pound the skins.  Add in the fact that Jake Jones of As We Ascend appears through his programming of the electronic elements here, as well as serving as the mixer, engineer, and co-producer on the album, and it would seem possible that the sound of the band might change, as well.  Yet, despite all this, Relentless Flood remains very much the same band that they have been for nearly a decade.

Musically, Relentless Flood continues to combine agressive, hard rock riffing and solid rhythm guitar lines, with modern programming and production elements, and Huffman's clean, melodic, lower-register tenor vocals, all supported by big drums and solid bass lines.  A perfect example of this is the lead single, "Away From Me", which has managed to climb into the Top 10 of several Christian rock charts after numerous weeks of airplay.  Not dissimilar from the band's previous big chart hit, "Come Home", "Away From Me" employs a strong sense of melody despite the gritty, churning guitars interpsersed with some electronic programming and some excellend drumming from newcomer, McLain.  A powerful song about spiritual warfare, "Away From Me" continues to showcase the band's lyrical and thematic approach of good vs. evil, God vs. Satan, as Huffman exhorts the devil to "get away from me, cause now I see you're no good for me, Stay away from me, hopeless enemy, you're going down today...".  Check out the lyrics video below...

"Breaking Out", is another song that will feel reminiscent of "Come Home", perhaps even more than "Away From Me".  The rhythm guitars scale themselves back to a large degree on the verse sections before coming alive on the chorus parts of the song, and the guitar solo, while not overly flashy, has enough style and flair to hook the listener's attention. The rhythm section is especially strong here, with some machine-gun like work from McLain that really complements the guitars.  Huffman sounds strong, working well within his range, and his voice has matured nicely over the years, gaining strength and depth on each release.  A great example of this vocal grown would be on the next track, a third straight hard rocker, "'Til The End", where Huffman adds a gritty edge to his vocals that was not nearly as powerful or believable on previous efforts,

"Take It All" is the first time the band even hints at slowing down, and while the verse portions of the song are much more stark in nature, with Huffman's vocals being far more out front than on other songs, there is a musical buildup that ramps up to the chorus sections, keeping the energy level high, even if the speed isn't necessarily there.  Huffman goes into a brief spoken vocal approach (perhaps snarled is more accurate) before the lead break, and the backing vocals feel especially strong here.

"Standing Tall" adds some extra thump as it steps up the tempo a notch or two from "Take It All".  As is often the case with Relentless Flood's songs, the band really scales back during the verse portions before springing to life in the bridge and chorus sections, with the rhythm guitars pretty much disappearing at points and some electronic atmospheric elements used to support the verses here.  Once again, McLain proves himself to be a valuable addition to the fold, as his tempos and patterns add so much depth to these songs.  The lead guitars here again adhere to the "less is more" school of modern rock soloing, which I don't always agree with, and I do find myself wondering what Dale (dad) would have done differently were he still slinging the axe on this record.

"Used To Be" is the closest thing to a true ballad on the record, and it's pretty good.  Some piano is added to the mix here (assuming these are some programmed elements from Jones, as no pianist/keyboardist is credited that I can find) on a poignant song about how the power or Christ's love and forgiveness rescued the song's protagonist from aspects of his past and brought about positive change in his life.  A lyrically powerful song, "Used To Be" really showcases Huffman's vocal maturity, as he handles the track with both power and emotion, again, adding a believablity factor to his vocals that perhaps wasn't always there in the past.

"Wake Me" begins the build back from ballad territory, heading back in a more mid-tempo rock direction, with some solid chug-chug-chugga-chug rhythm work from Rogers, whom I also assume continues to play bass here, as he did on the last album, as no new bass player is credited.  Huffman stretches his range just a tad bit here, reaching the upper edges of his rather smooth tenor, and he handles it well.

The title of "Bullets" had me hopeful that we would be treated to the band ripping things up with a burst of speed, but instead it falls back into what I consider to be Relentless Flood's default setting of aggressive mid-tempo hard rock.  Jones incorporates some more electronic elements here, and the guitar solo is smooth, short, and relatively tame.

The title track falls into much the same tempo as the majority of the tracks here, although the lead guitar work has a bit of flash to it, particularly atop the rhythm guitars and drums on the intro, and springs a bit more to life during the solo break than anywhere else on the record...although, we still aren't talking about anything overly glitzy or flamboyant.  Again, McLain is the hero of the day on this track, just crushing his way through things here, changing tempos with no apparent effort and modifying patters to keep things interesting.  A modern rock version of a breakdown is used to nice effect heading into the final chorus.

"Set Me Free" closes things out, once again slotting comfortably into that mid-tempo range Relentless Flood tends to live in, but with some of the most interesting rhythm guitar patterns on the disc, and a couple of mini bursts of speed that really lead me to wonder what would happen if this band just cut loose every now and then.  A rapid fire machine gun burst from McLain pulls the band out the short lead break and into the bridge leading to the last big chorus, making "Set Me Free" the most complete-feeling song on the album for me and one that I think sets the stage well for the band to move forward in its approach, if it chooses to.

This brings me to my one true complaint about this album: it feels like we have heard this before.  To fans of the band, the songs on Escape The Fall will likely feel very familiar, very comfortable...very much like the last album, The Time Is Now.  Now comfort and familiarity can be good things, for sure, but when a band grows too familiar, too comfortable, there tends to be a lack of growth.  There is nothing here that stretches the boundaries of what the band has done previously.  That is not to say that these songs aren't good, because they are.  They just never slap me in the earhole and scream, "check this out!", with the possible exception of "Set Me Free" at the end of the album.  I'm not saying the band should reinvent itself, or bring in a rapper, or become all electronic and totally change their style and sound (ahem, Nine Lashes), but when the vast majority of the songs here...and on the previous two albums, really...all run about the same length and vary little in tempo or structure, there is a sameness that can be misread as stagnance.

The good thing about all of this familiarity?  Well, what this album does better than the previous two is that while done in a familiar style, this album does what Relentless Flood has always done, but does it better.  For example, this album surpasses the previous two efforts from the band in the production area, no question.  Jones does an excellent job of beefing up the sound in places where it likely would have come across somewhat thinner in the past.  The separation of instruments is, overall, very good, and Huffman's vocals are not required to do anything seemingly out of his range or capabilities.  There are a few studio production tricks thrown into the mix, which is to be expected on a modern rock album such as this, but nothing that takes away from the performances of the individuals involved.  And, no disrespect to Marshal Huffman, but the drumming of  Dylan McLain really steps things up a couple of notches.

The packaging here is extremely basic, with a simple digipack serving to house the disc.  There are no lyrics or band photos included, although there is a thank-you section as well as the requisite performanc, writing, and production credits.  The artwork is a pretty cool touch, however, with the front and back being one continuous wrap-around photo.

In the interest of full disclosure, I was a supporter of the Indiegogo campaign for this album, and as you can see in the photo above, my copy of the CD is autographed by the band.  As part of my pledge, I also received a digital copy of the album a couple of weeks early, so I have had the chance to live with this album for a bit, so I feel comfortable with my opinions about Escape The Fall.  To that end, I find myself enjoying Escape The Fall quite a bit, but I do hope that the band stretches themselves more on their next effort, trying some new things, alternating speeds and tempos a bit more, and experimenting with their sound, while still remaining heavy and aggressive in their overall approach.  I also hope that it doesn't take four years for that next effort to surface, as Relentless Flood has a lot of talent and promise and deserves to be heard.

Rating:  Escape The Fall just edges into crankable territory, largely on the strength of the playing and the passion of the lyrical approach.  Crank this to 7.