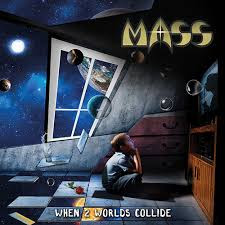 As outlined in the autobiographical song, "Some Time Ago", "way back in 85..." MASS hit the hard rock scene with their first full-length album, New Birth, with three of the four members that are still cranking up the amps and thundering away at the drums on this new album, When 2 Worlds Collide.  St. August, D'Itria, and Vadala have been around since the start, and have formed a musical bond, as well as a family-styled bond, that is evident in the music on this new record, which ignores trends and sticks to what the band has always done best...producing driving, hard-rocking music with strong songwriting, powerful vocals, and excellent musicianship.  This time around, Jeremy Huessi was brought on board to add a new element with keys and programmed strings, updating the sound a bit, but not doing anything to alter what MASS has brought to the table, particularly since their 2007 return on Crack Of Dawn, a harder, crunchier album than what many recalled from the band's most well-known album, 1989's Voices In The Night.

Album number eight opens up in fine fashion, with head bangers and fist pounders rumbling out of the speakers.  A hard-hitting drum cadence rips "Just Can't Deny" open right from the start, leading D'Itria's guitars to come charging to the front, clearing the way for St. August's still powerful scream to pierce the wall of sound built up on this full-throttle, classic rocker.   A catchy mid-track solo combines D'Itria's six-string prowess with Huessi's wizardry on the Hammond, before the final chorus closes things out.  A blistering way to start things off, no doubt about it.

Things slow down just a touch for "Only A Dream", but there is a thick, bottom-end heaviness here that is a force to be reckoned with, a mass of crunch that is Palumbo's rumbling bass, D'Itria's chunky rhythm guitars, and Vadala's crushing drums.  St. August is in again in fine form, showcasing a powerful tenor that he equally dips and elevates throughout the track, going a bit lower throughout the verse sections and then climbing the ladder during the soaring chorus.  D'Itria blasts through a fingers-flying solo, as well, as MASS delivers what I have to say is one of my favorite tracks by them from anywhere in their multi-decade catalog.  An excellent song, to be sure!

The title of track three, "Falling In Love", hints at potential ballad territory, but that is not the case here at all.  Instead the listener is treated to more classic rock-styled guitars layered atop Huessi's Hammond tones, similar in nature to something Boston or Deep Purple may have employed.  The drums drive the track through the verse sections, and once again St. August powers through the track with seemingly little effort and no show of time slowing him down.

"Alive" starts off with a cool acoustic guitar riff that leads into another punchy mid-tempo rocker that has 1989 written all over it.  Particularly enjoyable is the verse riffing from D'Itria, which has such a comfortable, familiar feel to it, as well as the brief acoustic bridge coming out of a big D'Itria solo.  There is all sorts of nostalgia tied to a track like this, but without feeling like this is someone else's song or a leftover from days gone by.

The first miss for me is the piano-based ballad, "Second Hand Rose".  I openly admit I am not a big power ballad guy...never have been with a few exceptions...as mostly these songs come off as overly saccharine and too slick for my tastes.  There has to be some real grit to a power ballad for me to enjoy it.  "Second Hand Rose", despite its solid performances, is just too polished to my ears.  It has a definite lighters-in-the-air feel to it, but there isn't much of an edge here for me to grab hold of, and the pace gets a bit plodding.  If I'm being completely honest, I don't care for the odd tone of the keyboards, either.  Just not my song, no matter how it is sliced...

"Turn It Over" recovers nicely, with a bass intro from Palumbo leading into some cool chugga-chugga riffing and a great, pounding drum line that are supported nicely by Huessi's Hammond.  D'Itria uses some vox guitar effects in a couple of places, first out of the second chorus run, leading into a big solo run, and then again out of the final chorus and into the chunky outro section. St. August, once again, really sounds at home on hard-hitting tracks such as this one, which is, once again, one of the better MASS tracks I have ever encountered.

"Revenge For The Maiden" has a more melodic metal, almost Helloween quality about it, from the big, galloping drums to the rhythm playing in support of the verses, from the fury of the guitar solo to the way the layered vocals are structured.   I know I have sung high praises of a couple tracks already, but this may be the best of the bunch overall, although my choice of the album's masterpiece may change from listen to listen.

The previously mentioned "Some Time Ago" is a very cool track, providing a brief autobiography of the band.  Built around a solid drum line and some very 80s sounding metallic guitar drop ins throughout the verses, "Some Time Ago" is another superb hard rock track that, once again, really showcases how underappreciated the talents of both D'Itria and St. August were back in the band's heyday.  D'Itria rips off another cool, inventive solo, and St. August unleashes his most powerful scream of the record on the exiting chorus.

"Stand Alone" is the second ballad of the record, and it is the better of the two.  There is a fuller sound here, with more grit to the guitars and less keyboard involvement, and St. August isn't quite as sweet in his vocal delivery.  Speaking of sweet, Stryper's Michael Sweet delivers an excellent guitar solo here, which really completes the full circle of the band.  For those who may not be familiar, Sweet actually produced the band's Voices In The Night album, which was released on Enigma Records, which was also Stryper's label at the time, and the band actually lived with Sweet for a couple of months while recording that album.

"Time Marches On" has a Whitesnake vibe to it, with its slow Hammond build at the intro, cruising into an arena-rocking drum section and a bluesy riff and vibe from D'Itria.  St. August may be at his best here, as he really gets to lay the power into his tenor here, as befits the musical style.  Not entirely sure what to think of the solo section here...it is definitely different and more modern sounding, showing some willingness to experiment, but for my money, I think I would've just let D'Itria rip into another big solo. Still, this is wicked cool, bluesy hard riff rock stuff here that I would love to hear the band tackle on a full-album basis.

The album closes with the title track which opens with a warning siren before building up into a nice, straight forward melodic metal rocker that closes things on a high note.  Again, the long-standing trio of St. August, D'Itria, and Joey Vee sound incredibly tight, along with new mates Palumbo and Huessi, who despite my initial misgivings, actually turns out to be an integral part of this record and is someone whom I would like to see become a permanent fixture in this band.

The packaging here from Escape Music is very good, with a 12-page booklet, with full lyrics, a full-color band picture (as well as a color photo of Huessi), writing and production credits, a thank-you section, and pertinent contact information.  The production here is excellent, and I really like the drum sounds attained here, which is frequently an overlooked area on so many rock albums these days.  The mix is excellent, also, with no muddiness and no one getting buried in the mix.

I think it is fair to say that When 2 World's Collide is the best album of this band's long career, and that's taking into consideration the greatness that I attribute to Sea Of Black and Crack Of Dawn, which are both excellent records.  I've had the great fortune to meet and hang out with these New Englanders a bit, watching some baseball on television (Red Sox, of course...ugh...), and getting to spend some time chatting with Louis.  Its safe to say I have met very few people in the industry that are more personable and down-to-Earth than the guys in MASS, and they put on a heck of a show, regardless of venue size.  Not only do I encourage you to pick up When 2 Worlds Collide, but to take in a live show if you are given the opportunity.

Rating:  An excellent record, with only one minor hiccup for me, which does virtually nothing to dampen the overall greatness of When 2 Worlds Collide.  Crank this Album Of The Year contender up to 8.5!

Back To Reviews Index
Posted by arttieTHE1manparty at 2:17 PM