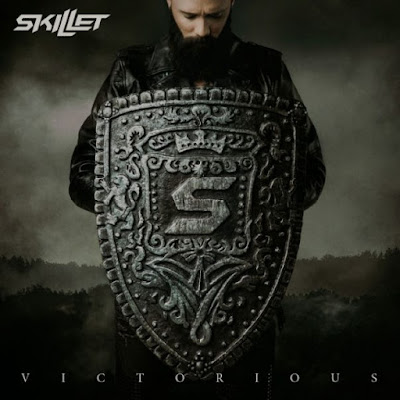 It's hard for me to believe that Skillet has been around for ten full albums now, with a career spanning over two decades.  Granted, I was a bit late coming to the Skillet party...or, rather, I took an extended break in returning to the party.  I was on board with the debut, self-titled record clear back in 1996, as I had no problem with the post-grunge sound the band utilized at that time, and rather enjoyed the band with the silly name.  But then, with the sophomore Hey, You...I Love Your Soul, and it's electronic alterna-pop sound, I was outta there...and I didn't return until 2003's Collide record, which is where the modern sound of Skillet really started to evolve.  Since that record, I have been a dedicated Panhead, with my entire family enjoying the band now, and all of us having notched Skillet concerts on our live music belts over the years (with another show planned for summer of 2020).

With this newest album, Victorious, the band returns for more of the huge arena rattling modern hard rock that they have blasted their fans with in various forms and fashions since that Collide record.  In fact, upon hearing the lead single, the infectious anthem "Legendary", I was actually a bit concerned that Skillet had bought into their own hype a bit, resting on their musical laurels and resorting to churning out formula-based radio rock.  While "Legendary" is catchy and hits relatively hard, it wasn't necessarily what I was hoping to hear from the veteran band, especially after the previous album, Unleashed, was reissued as Unleashed Beyond with some bonus material that found the band experimenting with heavier sounds (the Lacey Sturm supported "Breaking Free" and the heavy riff rocker, "Set It Off") as well as more mainstream rock balladry ("Brave"), and even a rather classic rock-sounding track ("You Get Me High").  And yes, I know, sometimes bands do things with bonus tracks that they wouldn't normally do, but after the very strong fan (and radio) response to "Breaking Free", and the positive reactions to both of the band's side projects (John's Fight The Fury and Ledger's...well...Ledger), I really had hoped for some musical growth and not stagnation or *gasp* regression.

It turns out that all I really had to do was get the CD and be patient for a couple of songs, as musical growth abounds on Victorious, without doing anything to alienate their heavy rock fan base.  There are plenty of hard and fast numbers, from the lead single "Legendary" (which WWE picked up for the theme song to RAW) to the aggressive "You Ain't Ready", to the album-closing metallic blast of "Back To Life", complete with a massive jam session at the end of the song, very similar to what we heard on "The Resistance" when Unleashed ended.  And those are great songs, don't get me wrong.  I'm sure they will all be staples in the new live show and will have fans on their feet, screaming along and pumping their fists in the air.

For me, however, the greatness of this new album comes in the not-so-tried-and-true areas.  Take for example the art rock, Imagine Dragons-styled "This Is The Kingdom", with its big, catchy intro and punchy-but-sing-along chorus.  Nowhere in the Skillet catalog will you find a song sounding anything like this one, and I truly hope this is released as a single as it will expose a completely different side of the band to people who think that Skillet has only two speeds: full-blast and then ballad.  And while "Rise Up" has plenty of fist-in-the-air power to it, it is impossible to miss the dare I say dance-able groove of the track, even when John's roaring through the chorus of the song.  And lest you thin Seth's guitars are overlooked or underplayed, tracks like "Reach" or "Save Me" showcase just how truly great he is on guitar.

For me, some of the greatest points in this album come in the slower moments.  Take for example "Terrify The Dark", a truly great track which really showcases the vocal talents of both John Cooper and Jen Ledger. While, as a whole, this album has a bit less Ledger than the past couple have, her moments are big and powerful, and nowhere is this more evident than "Terrify The Dark".  The vocal interplay between the two has become a big part of who Skillet is, especially on the slower material, and while this isn't a true ballad, there is plenty of power and emotion poured into the song from both singers.  This is easily one of my favorite tracks on the album, and again one that I hope is released as a single.

Ledger is also a strong presence in another one of the album's shining moments, the title track, "Victorious".  Rather than simply supply the response to John's lead vocals, Ledger has a supporting melodic run to accompany the lead, adding a depth that is not present in many of the harder numbers.  This mid-tempo number about overcoming depression and anxiety is powerful and one that John has said was inspired by, among other things, the death of Linkin Park's Chester Bennington.

Another track that will likely catch longtime fans a bit off guard is another of the most powerful songs here, the penultimate "Finish Line".  There is a sassiness...even a strut...to this song that is not standard Skillet fare.  The vocal swagger that Cooper brings to the opening verse is almost tangible as he grins knowingly through the lines, "Good evening my people up in the chandeliers, The wining and dining, the menu blood sweat and tears".  Pair that with the HUGE, thunderous chorus that will have everyone chanting "Heroes never die!  Gonna make it to the finish line! We know, we'll survive.  Even if we have to crawl to the finish line!"  For me, this may be the most inspirational track the band has ever put together and should be their next massive hit, being picked up by athletes and teams across the competitive spectrum, from the greatest stars to the biggest underdogs all being able to claim some connection to the challenge issued by the lyrics here.

While many may decry the band's seeming lack of faith-based lyrics, if a person digs into the words of the songs, there is plenty of faith on display here.  No, the band doesn't beat the listener over the head with Bible chapters and verses, that has never been their forte.  But there can be little mistaking the spirituality of songs like "Anchor", "This Is The Kingdom", or "Terrify The Dark".  And while Cooper has expressed his understanding that his band exists in both the Christian and secular worlds, he has also refused to back down from his stance of faith and interjects his beliefs thoughtfully into his projects, even if the listener has to do some soul searching of their own to piece together how those lyrics also fit into their own life.

Overall, Victorious took me into different musical places, utilizing the tried and true, as well as the unexpected, to create an album that is both accessible and challenging for long-time fans.  For those who don't want their favorite bands to grow and change and expand, I would imagine Victorious is a bit uncomfortable in places.  But for those who are willing to go on a musical journey to some new places, while also stopping at some beloved checkpoints along the way, Victorious may be the album of the band's career.  I'm willing to go for the ride, personally, and while I am not sure if this is the best album the band has ever made, it is definitely a really, really good record that I continue to spin with great regularity months after its release.

Rating:  Definitely a cranker, blast this one at 8.5.

Posted by arttieTHE1manparty at 6:26 PM