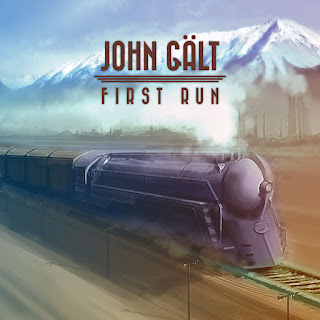 I have to admit, one of the greatest things about doing a blog like this is the chance to get to hear music I might not otherwise hear.  Sometimes it isn't great...other times it is very, very good.  The music on this little EP from the Kharkiv, Ukranian band, John Galt, falls in the latter category.  Taking their name from Ayn Rand's "Atlas Shrugged" (they all claim to have read the book), Joh Galt set out to, in their own words, "to be loud, drink till we drop and get the best chicks around!"  While I cannot guarantee those things happening, I am going to guarantee that anyone who gets the chance to hear this little slab of music is going to be impressed.

When the band contacted me and asked me to review their EP, I will admit I was not overly keen to do so, as it was released independently and was from the Ukraine.  Now, I'm not being some sort of elitist snob who shuns bands from outside the normal hotbeds of hard rock and all of its sub-genres, but quick...show of hands...who can name three huge name bands from the Ukraine?  TIME'S UP!  That's right...none of you could.  I couldn't either.  So, once again, I wasn't expecting a whole lot.  As such, I was pleasantly taken aback by just how good this indy project is!

For starters, there is virtually no way that even a semi-serious fan of the New Wave of Swedish Sleaze and Hard Rock (I should copyright that name...) could tell me that John Galt was not from Sweden, Italy, or England based on their style and sound.  These guys are that good and have the sound down that perfectly.  In fact, were it not for some slight differences in the vocals, I would have guessed that these were some unreleased tracks from the first Crashdiet album.

Skipping the intro, which is just 45 seconds of sound effects and sirens, the band rips right into things with "Riot Radio".  A simple, yet pounding drum intro and some rumbling bass chords get things going before the guitars and Ostap's vocals kick in.  I am not kidding when I say that Ostap sounds a LOT like Crashdiet on this track, not only in tone and sound quality, but also in the way he delivers a line.  It's also nice to hear a foreign band that has at least a grasp of the English language, and there are no glaring mis-steps from a lyrical standpoint.  Some great gang-shouted "hey's" lead up to a nice guitar solo about 3/4 of the way through the track.  Good stuff to be sure!

"White Widow" delivers more of the same, with guitars that ooze with the kind of sleazy attitude that makes you believe that the strings have to be de-greased after every performance! Here Ostap's vocals take on just a hint of Ratt's Stephen Pearcy in tone, and the lyrics become a bit "f*bomb heavy", which seems to often be the case with foreign bands for some reason.  Once again, however, there are no glaring lyrical mishaps as far as understanding the language goes, at least that I can pick up on.  The rhythm section is again tight and throbbing, giving this song a solid backbone to work around.

The EP's closer, "Bad Brotherhood" is more of the same:  Swedish-inspired sleaze with Ostap again channeling Pearcey and his ilk, and the band incorporates probably the strongest guitar solo of the mini-album.  Really good stuff here that makes me very anxious to hear what these Ukranians come up with next!

While not always the case with indpendent releases, the production here is very crisp and clean, but not overly polished, allowing the band to keep their attitude and edge intact.  I have no idea about the packaging or anything like that as this is, as far as I can tell, a strictly for download album.  This also means I don't have the lyrics to the song, which I really like having, but this is a minor point.  First Run is free to the public and can be found at http://johngaltrocks.com/ .  Do yourself a favor and check this out and see if you don't get the same great vibe from this little tease of an album that I got!  While short on playtime (just over 15 and a half minutes), this band has the chance to go places with their high energy, full-throttle, Swedish-inspired brand of sleaze!!!

Rating:  While short on length, this EP is definitely a cranker!  Crank it at 8!

Back To Reviews Index
Posted by arttieTHE1manparty at 9:06 PM