BERETTA JANE "On With The Show EP" 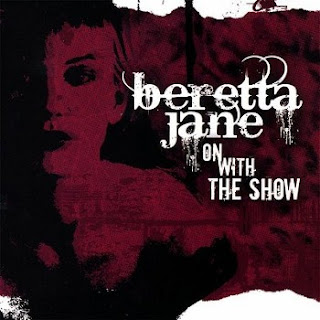 Beretta Jane's 6-track EP On With The Show is a little disc that just feels like you have heard it before somewhere.  This is not a band that is trying to relive the sleazy Sunset Strip days...their music feels like they are actually there!  There is a certain comfort factor with this release that is almost tangible, like you can touch, taste...maybe even smell...the grime and grease and grit that the bands of Hollywood's underbelly were putting up on stage night after night.  In short, this is one excellent effort!

From note one, Beretta Jane treats the listener to some of the best American sleaze in quite a few years, at least in my opinion.  This EP fits right in with the style and sound of Guns N Roses, LA Guns, Faster Pussycat, and all the best sleaze rockers of the late 80's and early 90's.  This is not hair metal, folks...this is pure sleaze, from the slimy guitar tones to the scratchy, snarly vocals.  In fact, on the first track, "Shot Down On Sunday", the band sounds a LOT like the music of GnR with Taime Downe on lead vocals and in a very bad mood.  The follow-up, "C'mon N Feel It", for a very brief second, makes me think of Golden Earring's "Radar Love" with the drum rhythm at the very beginning, but this feeling is quickly shoved aside as the guys rip into another sleazy romp in an ode to essentially rocking a venue to the ground, drinking all the booze in the joint, and picking up on the sexiest, sleaziest chicks they can find.  There is a quaint little slow-down spot in the middle of this track that then morphs into a tight little solo, courtesy of mister Via, before rocking back up to full speed again.  "Let Me Go" is an interesting track, complete with barroom piano, some acoustic-type percussion, and a jangly rhythm that, again, reminds me of some of the stuff Faster Pussycat tried on their very first album when they infused just a bit of soul into their sleaze.  While definitely not a slow track, it does provide a bit of a break before the sull-bore attack of "Angel Got A Beretta" kicks in.  This song has the most modern sound of all the tracks, but don't take that to mean that the band changes styles at all, as this is still pure sleaze; the production is just a bit slicker than on most of the other songs here.  Still a solid track that has one of the best guitar solos here.  "So Good" has an almost funky feel to it, infusing a bit of a 70's classic rock feel to the sleaze they otherwise offer up on this EP.   Things close out with the slow rocker, "One More Night".  This song is the one where the band breaks formula just a bit and sounds a bit like Tesla, which is still really cool.  A good way to round out a very solid effort from start to finish.

The band is extremely tight throughout the disc, belying their relatively short existance at the time of recording.  Unfortunately, from what I understand, Mickey Valentine has left the band and I am not sure if Beretta Jane has continued on or not.  If not, this is a fine representation of what the band had to offer and is well worth tracking down if you can find it.  Soulful at times, sleazy nearly all of the time, and filled with catchy guitar hooks and short but skillful solos, On With The Show is a tasty little piece of modern sleaze that feels like it was born in 1989 instead of 2007.

Rating:  Crank this to a sleazy 8.