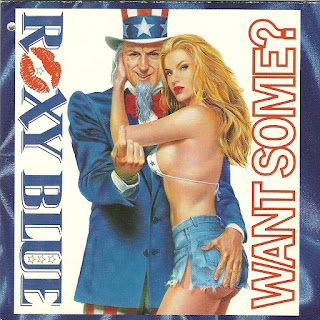 I'm not sure if Geffen wasn't paying attention or what, but by 1992 bands like Roxy Blue were essentially dead and gone.  I mean, all they had to do was look at their own label to see the havok that Nirvana was releasing upon the hard rock and hair metal world.  That being said, I am extremely glad they put out this album because it is truly one of the best pure hair metal albums of the early 90's, without a trace of attempted alternative or grunge crossover to be found.  From the hairstyles to the clothing to the interior pictures...oh, and of course the music...Roxy Blue is just about the quintessential hair metal band, and I dare say they would have been HUGE if they had been around about 5 years earlier.  This album is simply that good.

Now, I'm not going to tell you this is the best album ever made...just that it is a very good album most people have never heard.  For some reason, every time I put this CD in, I am swept away to summer, as that is the fun vibe I get from the songs here.  Overall, the musical performances are really good, even when the lyrics are a bit simplistic, such as is the case with songs like "Sister, Sister" with it's oh-so-deep chorus of "Sister...let me show you around, Sister...let me take you down".  Fletcher is a very good guitar player with some cool solos, especially the intro to "Rob The Cradle", which is obviously this band's take on Van Halen's "Hot For Teacher" in terms of style, attitude, and the bouncy rhythm contained within.

Most of the songs are uptempo and range from the very good to the excellent.  Even the cover of Pete Townshend's "Squeezebox" is pulled off with a flair and attitude that many other cover versions seem to be lacking, and Fletcher rips off a tasty, if too short, solo in the middle.  "Rob The Cradle", as mentioned before, is chock full of swagger and I think David Lee Roth would be proud with the way this song is pulled off.  I am in no way saying it is a ripoff of "Hot For Teacher"...that's just the vibe I get from it.   "Talk Of The Town", "Too Hot To Handle", and "Love's Got A Hold On Me" are all very solid rockers that would have been a blast to hear in concert, I am sure.  "Main Attraction" closes the disc in excellent rocking fashion as well.  The required power ballads are here, also, with "Times Are Changin'" and "Luv On Me" both actually being more down-tempo songs than true ballads, but they were also both radio-worthy if this had been 1988 and not 1992.  Both of these tracks, along with "Rob The Cradle", were released as videos, but the boys from Memphis, Tennessee were simply too late to make a splash and disappeared after this album.

I keep trying to think of who lead singer Poole reminds me of, but the best I can come up with is Bret Michaels' delivery style sung in a bit lower register.  The backing vocals are excellent and remind me of the more radio-friendly, poppier backing vocals of Nelson, Trixter, and bands of the really melodic style.  This is owed, I am sure, largely to the fact that Mike Clink produced the record, and big backing vocals were his thing at that time.  The production is excellent throughout the album and the mix is nearly flawless, with no one instrument burying another.  Even the bass is prominent throughout, which was not always the case with hard rock and hair metal, especially in the early 90's as many bands seemed to try to differentiate themselves from the downtuned depressing sound of grunge.

The packaging is very simplistic, with no lyrics, which is always a bummer for me.  There is one band photo on the four page fold-out insert, and a large thank you section, but nothing other than that.  Minor details, I know, but I also know some people really care about that kind of thing...

I have seen this album fetch as much as $40 on eBay, probably because I am guessing there was a rather small print run on this disc due to lower than hoped for sales.  If you look around, you can find it for $20-25 most of the time, and occasionally it pops up quite a bit lower, at least for the starting bids.  If you can find it in a CD shop for under $20, I would definitely snap it up...it is well worth it.

Rating:  Crank this fairly hard to find gem in the rough to a very solid 8!

Back To Reviews Index
Posted by arttieTHE1manparty at 6:17 PM