PAISTY JENNY "Head In A Haze" 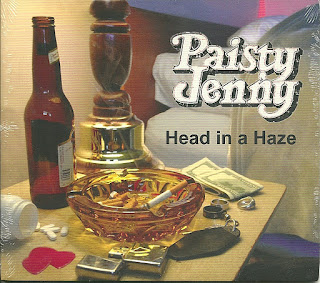 2011 may be the year of the EP, at least for me, as it seems I have reviewed more new EP's than full-length discs.  Of course, that isn't completely accurate, but it sure seems that way.  This might not necessarily be a bad thing because just about every EP I have reviewed so far has been a very solid effort and well worth picking up, in my opinion.  Does the new EP from Paisty Jenny continue that trend?

Hailing from Lincoln, NE...and proving there is more to Nebraska than corn and college football...Paisty Jenny has been around for a few years now, having released a total of four albums now.  As their website (www.paistyjenny.com) states, their style and sound has been described as "arena rock with a modern edge of influences that put them in with bands like Shinedown, Hinder, and Puddle of Mudd".  I don't know about the first or last names on that list, as there is a definite sleaze factor incorporated into the sound of Paisty Jenny that simply is not found in Shinedown or Puddle of Mudd.  However, there is a DEFINITE connection with a band such as Hinder which takes a good chunk of the 80's and incorporates modern production and guitar tones to come up with what I like to simply call modern American hard rock.

This mini-album starts off rocking and really doesn't let up for the next 21 minutes or so.  It is, however, an effort of two halves, with the first half being more of the modern sound, while the second half goes a bit more "retro", if you will.  There is not a pure ballad to be found on this disc, and there is only one even remotely slower song on the disc, with the majority of the music bouncing between mid-tempo and full-speed ahead.  Album opener "Anything" is one of the more uptempo numbers here, and is also one of the most modern feeling songs on the disc, definitely employing a kinship with Hinder, Underride, The Last Vegas, and their ilk.   "Back Of Your Hand", while still employing a modern feel, is a bit more mid-tempo in feel and sports a very good guitar solo from Mr. Liberty.  "Hypocrisy" is the hardest rocker on the album, complete with gang-shouted "hey's" leading into the chorus, and also sporting a mean guitar solo once again.

The second half of the disc is the more retro-feeling half of the album, and this is where Paisty Jenny really shines, in my opinion.  "Head In A Haze" is another full-steam-ahead rocker extolling the life of a hard-rocking band trying to remember "what the hell she did backstage".  Sure, it's a bit cliched, but it is on a song like this that Paisty Jenny really flashes their throwback badges and drops the sludge into their sound, coming off a lot like an updated version of Bach-fronted Skid Row.  Yet again, Liberty smokes his way through a very strong solo on this track and the band comes across as being very well acquainted with each other's strengths.  "Sad Songs" is another uptempo rocker that, while solid, is not my favorite moment on the EP.  The album's closer, "My Way Home", is the most melodic effort on the release and the slowest momet as well, although it is still not a ballad by any stretch.  This is an excellent closer to a really solid effort and leaves the listener wishing that there were another three or four tracks to follow.  This is both a good and bad thing, as while it closes things out nicely, it also really makes me wish the band had come up with another song or two to put out a full length disc.

One major step the band has taken to really help their sound is the recruitment of Michael Beck as the producer and Brad Vance to do the mastering work here.  Beck has worked with a wide range of talent from Badlands and Marilyn Manson to Ke$ha and Soilwork, and Vance has twisted knobs and adjusted sliders for such well-known acts as Plain White T's and All That Remains.

The packaging is relatively simple and is, yes, a digipack, but to make things worse, it's a SLIPSLEEVE digipack, which I hate more than just about anything!  There are no lyrics included, nor are there any solo breakdown listings, so I am not 100% sure of who is playing each of the solos on these songs, so I have to assume Liberty is behind most of them, although  I can tell you that Lee did a good deal of the guitar work in a live setting.  I hope that these guys get the opportunity to hook up with a bigger label at some point, as I think Paisty Jenny could really benefit from more exposure to a wider audience.  There is no reason that these guys shouldn't be getting airplay alongside of bands like Saving Abel and Breaking Benjamin (both of whom they have opened for), or even the Hinders and Shinedowns of the modern hard rock world.

I happened to be at the release party of Head In A Haze a couple of weeks ago and was able to hear most of these songs live, which was pretty cool; I already had a good idea of where this review was headed before I actually took the wrapper off my disc.  The songs live stay pretty true to their recorded performances, so if you pick this latest effort up and enjoy it, be sure to try to catch a live show if you get the chance.  Odds are you will enjoy "getting paisted" with Paisty Jenny.

Rating:  Rock this at .5...and seek out their older material as well.

Back To Reviews Index
Posted by arttieTHE1manparty at 4:58 PM