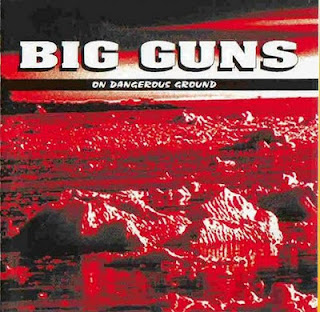 When grunge hit the United States, the music many of us loved didn't necessarily die...in many cases it just moved east.  Far East.  As in Japan.  By all accounts, the depressing, downtuned, fuzzy tones of grunge did absolutely nothing in the hair-loving, melodic metal haven of Japan, and so a lot of bands saw this area as a chance to keep doing what they enjoyed and making the music they loved.  Mr. Big, for example, became HUGE stars in Japan, and Firehouse has had a steady following there as well.  Big Guns is a band that while never huge like either of those two bands did release a very solid album with On Dangerous Ground that, had it come out a few years earlier in the States, may have actually made a dent on the charts.  As it stands, On Dangerous Ground is a piece of melodic hard rock history that will cost you a pretty penny to track down, but it is worth it.

When listening to this album, the first thing that really hits me is just how much the lead singer, Ian Taylor, sounds like Kal Swan from Lion.  I don't mean they sound a little alike...they sound like vocal twins for the most part.  Taylor, just like Swan, sports a smooth, powerful, lower-tenor range that he never lets drift into falsetto or forced scream territory, which is definitely a good thing, as it gives these melodic rockers a sound that is distinct among all of the clone bands that really put a bullet in heart of the hair metal scene.

Big Guns also knows how to utilize their twin guitar attack, ulike so many bands that don't really seem to do anything with two (or more) guitars on records, even if they use them to powerful effect live.  Brockelbank and Lawson (sounds like a law firm to me) are obviously not household names by any stretch, but both are extremely talented players that really know how to milk a smooth, soulful sound out of their instruments on the power ballad "Live & Learn" or on a more groove-oriented rocker like "Heart & Soul" (which I think bears at least a passing resemblence to a Back For The Attack-era Dokken in its delivery and style).   This album is full of melodic solos that don't rely on whammy bars and fret tapping to impress; these guys can flat out play.

The Wards...I'm assuming they are brothers...form a tight, if unremarkable rhythm section.  They keep the songs in the pocket and really help these songs establish a tempo that the band is obviously comfortable with, but don't expect to hear a Billy Sheehan or anyone of that ilk on the bass...nor will you hear an overwhelmingly powerful or inventive drummer in this band.  There is nothing wrong with what is brought to the table here, but there is also nothing overly significant in the offerings by either John or Robin Ward.


Similarly, the songs themselves are rather standard fare for the most part, with nothing earth-shattering or scene-altering, but there are no clunkers here, either.  The album features just one ballad, the previously mentioned "Live & Learn", and the band really doesn't even stray into mid-tempo territory all that often.  "I Live A Dream", "Let's Get Crazy", and "Slipping Away" are all excellent rockers, with the last song again having a fairly Dokken-esque quality to it.  Album opener, "Living It Up" is also a solid rocker but it is hampered by an exceptionally long intro that stretches out for more than a minute which is REALLY distracting in my opinion.  On the more mid-tempo material, "Picking Up The Pieces", a nice acoustic-based number that starts off sounding like it is going to trend more towards the slower side of things, is probably the best with its layered chorus vocals and thumping bottom end once the electricity is turned on in the amps.  "Love Gets In The Way", which starts off in a very ballad-like mood before turning it up a notch or two, is pretty cliched and is the weakest song on the album, but even this song is so much better than a lot of the material the surviving American hairbands were trying to put out...and a thousand times better than 99% of all grunge material.

As I mentioned earlier, fans of Lion are going to find a lot to like about this band, as there are some very definite similarities that don't stop with the vocals.  Baton Rouge is another band that will have some parallels drawn with Big Guns, and, as I pointed out on a couple of occasions, there is a definite Dokken feel to a couple of these tracks, but the vocals are better than a lot of the stuff Don was trying to force out of his pipes following the Back For The Attack album.

Zero Corporation is a relatively small Japanese label and this album is LONG out of print, so is very hard to come by and can be rather pricey.  I was told that a British label picked it up a year later, but I don't know the name of the label or if the release was legit or merely a bootleg; I don't even know what the album artwork looks like.  Regardless of the label, if you can find this disc cheap somewhere, I think just about any fan of the bands I mentioned, or fans of solid, hook-based melodic hard rock with very little in the way of AOR or prog rock, will find themselves enjoying this effort from Big Guns.  I'd keep your eyes on eBay or the used CD shops and see if you can unearth this gem for under $20...

Oh, by the way, I have heard that there was a second album recorded but NEVER released by the band, so if you see another Big Guns release out there, it is almost guaranteed to be a bootleg and I would be very wary of the quality of the recording or the material.  You have been warned....

Rating:  I'd crank this to 7.5 if you can find it at a good price, but don't burn your CD buying budget on this disc alone.