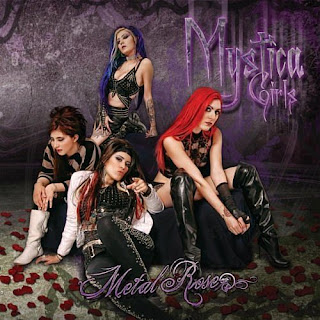 This four piece, all-girl band is from Mexico and features a rather interesting line-up which includes a violin.  That's right...a metal violin!  Previously, the band was simply called Mystica but changed their name to Mystica Girls for some reason (is there a Mystica Boys, also?).  I'm not 100% sure how this CD ended up in my hands as it is not a glam/sleaze/hair metal band at all, although I would imagine the album cover would lead someone to that assumption, as all of these very attractive ladies are dressed in their best Vixen-meets-Posion-meets-LA Guns attire.  However, when you listen to the music, these four ladies are pretty much straight-ahead classic/power metal with some thrash tendencies (especially in the drumming department), with very little in the way of glam to their sound.  That does not mean these songs are unlistenable by any means, as the music is very well-executed for the most part...they just aren't what I normally listen to.

Musically, the performances are excellent.  The guitarist, Blackcat, is an amazing performer and you can find her doing a lot of power metal covers if you look her up on YouTube (I have tracked down covers of Rhapsody, Stratovarius, and, of all people, Joe Satriani).  The girl can flat out shred when she wants to and her solos and rhythm playing are some of the hightlights of each of these six tracks, with her work on the title track being exceptionally powerful.  The same holds true of her very melodic solo on "Tortura"  Alice, the drummer, is also extremely talented and shows this talent witha lot of thrash-styled double-thumping on her drums that would leave a LOT of her male drumming counterparts in the dust!  This is especially evident on songs like "Mi Sangre" where she just goes full-throttle for the majority of the song.  Incidentally, Red Jane shows off her bass chops on a little mini-solo in this track as well, and she takes the lead on the intro the previously mentioned "Tortura" and on disc-closer "Diluvio".

The choice to include the violin as an instrument in this style of metal is interesting.  This is not the gothic-styled hard rock or metal that one normally associates with the use of strings.  I am not completely sold on the use of the violin here, as in a couple of places it doesn't seem to be playing in the same key as the rest of the music and the tone is, well, a bit annoying.  The mournful tone that is used in "Diluvio" is fine and adds to the somewhat haunting feeling of the track, but on "Mi Sangre" in particular, the instrument takes on a kind of "yowling cat" sound.  Perhaps I am just not accustomed to the use of the violin in metal and maybe this will grow on me with repeated listens.

The same can be said of Sofia's vocals.  I am generally not a fan of female vocals and Sofia doesn't do a lot to change that opinion, although she does have some power to her pipes.  What bugs me the most is that she employs a vibrato that just grates on me in a couple of places and, while she seems to be really emphasizing emotion in her vocals, I have no clue what she is saying, as four of the six songs are sung in Spanish and I don't understand a single word that is being said!  Sadly, to me, that is something of a deal breaker as I really like to know what is being said the majority of the time, as I think it adds a lot to the songs.

All in all, this is not a bad effort at all, and I think my friends who are more into power/thrash metal and straight-up classic metal would likely enjoy it if they can get past the female vocals and the Spanish language barrier.  I have no idea how many albums this band has released, but Metal Rose is a decent little effort that is worth picking up if it is not too expensive as an import.

Rating:  Rock this at a 6 overall, with some definite 9 or 10 moments on individual instruments.  These ladies can flat out rock!