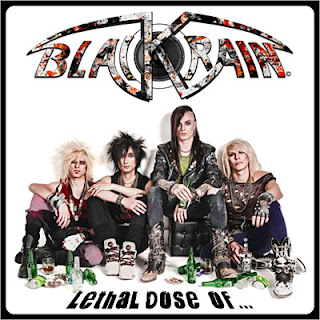 Black Rain is a band that is one of the very few true contenders for the throne of Crashdiet as far as the torch-bearers of the new generation of glam/sleaze bands.  These four French musicians have released an album that sounds like it was found on the streets of Hollywood in 1986 and then re-mixed and re-mastered using 2011 technology.  A Lethal Dose Of... is nearly as good as Crashdiet's Generation Wild, but it is about two songs too long, in my opinion.  More on that in a minute.

Things start off with "Get A Gun" which leads in with some great gang shouts only to be cut off by a gunblast and then some gunfire like drums that get things rolling in a big way.  This is an awesome way to kick off the album and it is immediately apparent that as good as the band sounded on 2009's License To Thrill disc, they are out to top themselves in every way.  Despite a somewhat simplistic chorus of "Get a gun, shoot them down, get a gun kill them all, get a gun mother f**ker, get a gun, shoot them down", this is a generally strong song filled with a lot of attitude and Swan's high-pitched, glammish vocals over a sleazy musical track.  Awesome stuff, to be sure!

"I Need My Doctor" is another great song with a nice throwback vibe that really works well and keeps things rolling along.  However by track three we run into one of the tracks I think could have been eliminated.  "Dead Boy", while not a terrible song, does not fit the rest of the disc and sounds a lot more modern in its musical approach.  It kind of reminds me of the odd turn that Faster Pussycat has taken in recent years, incorporating a techno/electronic vibe into what should be a sleazy song.  It really comes out of left field, because things get right back to normal with "She's In Love", another little rocker with a nice rhythm and a simplistic, yet catchy chorus and a very strong guitar solo from Max 2 a little over halfway through the track.  "Overloaded" keeps the party going full-speed ahead, and "Burn N' Die" kicks things into hyperdrive on this punked-up sleaze romp that just drips with spit and snarl.  "Into The Groove" has a similar punkish-charm to the guitar parts, but the verses have something of a poppy quality to them that might have some people thinking of Reckless Love, another killer band that has really broken out in the past year or so.  "My Young Star" is a mid-tempo song that has a nice groove to it and a catchy hook and "Addicted To Failure" is another attitude-infused rocker that really exemplifies the sound of this excellent band.  In fact, it is songs like this that leave me wondering how it is that this band doesn't get more exposure in the scene because they are just incredibly talented and should appeal to both glam and sleaze fans in equal doses as they are not afraid to cross the fine line that separates the two sub-genres.

"Rock N' Jive" is the other song that I don't really think fits.  Swan uses some odd effects on his vocals on this track and he never really unleashes that siren-like scream that he is known for and has become a huge part of the sound of Black Rain.  Much like I said about "Dead Boy" before, I don't think this is an out and out terrible song, it just doesn't feel like Black Rain in general and doesn't fit this album in particular.

The only "slow" moment on this disc is "Shining Down On You", and I wouldn't necessarily call it a ballad.  Its more of a slow rocker, if that makes sense, as this isn't some cozy-up to your cutie power ballad by any means.  The disc then closes in fine fashion with "Rock Your City", another high-intensity rocker with a pulsating bass line and some scorching guitar work right from the get-go.  Swan actually takes his seemingly helium-induced vocals down just a slight notch on the verses of this track, but re-inflates them when the chorus hits.  This is a great way to wrap up an absolutely smoking disc that really only has a couple of minor hiccups along the way.

On the expanded edition of this album, the second disc includes several live cuts and a couple of alternate takes from the main album.  "Get A Gun" shows that this is a very tight band, even in a live setting, and really showcases Swan's ability to pull off his vocals in front of a crowd.  I kept waiting throughout the live tracks for his voice to crach or fall out of register somewhere, but it never did, which is pretty incredible, really.  Live versions of "N.A.S.T.Y." and my personal favorite Black Rain song, "Innocent Rosie" really sound strong here.  The alternate takes of "Shining Down On You" and "Baby Shot Me Down" are good but not so different that I think they really warranted inclusion here unless it was simply to increase the length of the bonus disc.

Look, if you are seeking out another KILLER glam/sleaze band from the European scene, I would not recommend anyone, except possibly Crashdiet, more than I would recommend Black Rain.  These guys just get stronger with each release and they definitely have a firm grasp on the style and sound that they are seeking to recreate.  They have a definite love for the Sunset Strip sound and they go to great lengths to successfully recreate it without sounding like a clone of anyone.  Pick up A Lethal Dose... as soon as you can, and also look for License To Thrill and even the Innocent Rosie EP while you are at it!