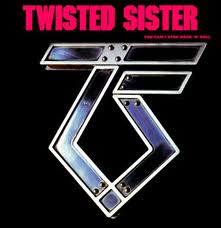 One thing I love about doing classic reviews is seeing how these older albums stand the test of time.  I also really love being able to filter the music through the written word, when possible, which I am able to do today as I have just finished reading Dee Snider's autobiography, Shut Up And Give Me The Mic: A Twisted Memoir.  Quite often, these books give the listener a new insight, a new respect, even a new love, for the music being written about.

While most Twisted Sister fans will claim Stay Hungry as the pinnacle of the band's career, I have always favored You Can't Stop Rock N Roll as the best the band has ever offered.  To me, You Can't Stop... was the perfect balance between the heft and urgency of the debut album, Under The Blade, and the commercial appeal of Stay Hungry.

As is the case with nearly everything Twisted Sister has ever done, there is an underlying rebellious tone that feeds the fist-pumping anthems, and a surprising amount of emotion that supplies the ballads (regardless of how few the band has in their catalog).  After reading the book, it is obvious where Snider dredged up the raw aggression for tracks such as "Like A Knife In The Back", "The Kids Are Back", and the band's first hit (albeit only really a hit in England), "I Am (I'm Me)".  However, nowhere is the band's, and especially Snider's drive, determination, frustration, and anger more perfectly channelled than on the title track, the truly classic "You Can't Stop Rock N Roll", which should be the theme song of any underdog band that is determined to make it out of the gutter and into the limelight!  ("We're Gonna Make It" should be number two on the soundtrack of a driven band, by the way...)  On the flipside, a song like "You're Not Alone (Suzette's song)", which is written about Snider's wife, shows a depth of emotion and songcrafting that is not as common among many of the MTV-spawned sound alikes that wrote from a paint-by-numbers formula more than from any real emotional state, whether that emotion was love, hate, anger, or desire.  In my opinion, it was this ability to express what he, and so many others like him, was feeling that set Snider apart from many of his contemporaries as a songwriter.  Granted, Twisted Sister's music was never the most intricate musically, but you have to admit it was catchy, anthemic, and everyone seemed to be able to find something on a Twisted album that they could relate to.  This album does that better than any other in the band's catalog, in my opinion.

The 2001 reissue of You Can't Stop... (as well as the 2006 British reissue on Demolition Records) includes three bonus tracks, but it is pretty easy to hear why at least two of these were not included in the original release.  Of the three, "Feel The Power" is the strongest and shares the most with the rest of the album, so much so that I think it could have fit perfectly on this disc had the industry standard at the time not pretty much demanded that albums be ten songs in length, period.  The other two, "Four Barrell Heart Of Love" and "One Woman Man" are pure cheese that don't have the angst the rest of this album generally presents.  Still, if you have to make the choice, I would suggest picking up the reissue, especially if you are a person who wants to have all of the songs by a specific band.  Of course, if you are a completist, you have to have the original...AND the reissue, neither of which is overly difficult to find at a reasonable price.

To me, You Can't Stop Rock N Roll is easily in the top 50 heavy metal albums of all time and is one of two Twisted records I constantly find myself returning to (Stay Hungry also fits this bill).  While it did manage to sell gold (500,000 copies), this album never got the respect it so richly deserves.  For newer hard rock fans looking for a solid slice of metal history, or older fans who may have overlooked this album when it first came out, You Can't Stop Rock N Roll needs to be in your collection...and it needs played, loudly and often!

Rating:  A true classic, crank this to 9!

Return To Review Index   ﻿
Posted by arttieTHE1manparty at 11:39 AM