THE PHOENIX "My Turn To Deal" EP 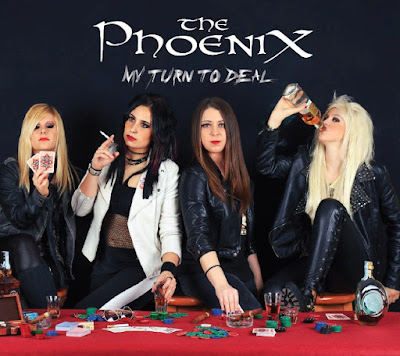 One look at the cover of this little EP and you have a pretty good idea of what you are going to get from The Phoenix.  Hailing from Italy, these four hard rocking ladies not only have the look and the attitude of the 80s era down, they also have the the sound and the songs to back things up.  Combining elements of Lita Ford, the sleazier side of the Hollywood Sunset Strip, and the nicely layered all-female vocals of Vixen, The Phoenix delivers a solid slab of polished metallic pop-rock that teases you for just over 17 minutes, getting you all hot and bothered, then walks away after a quick peck on the cheek and a sly smile, leaving you wanting so much more.

Unlike a lot of all-girl bands, The Phoenix are the real deal and not just a lot of hairspray, make-up, and tight leather...although they appear to have that in spades as well.  Right from the start, with the sound of the barroom and the shuffling cards that opens "My Turn To Deal", the rock n roll is thick and powerful on this EP, with solid grooves packed into each of these four minute rockers.  "My Turn..." comes rumbling in with some catchy bass work from RocketQueen and solid drumming from McMousse, before the sass-laden vocals of McFrison take charge...at least until a smoking guitar solo forces McFrison to focus her attention on her axe and not her microphone.  A solid kick-off that definitely piqued my interest.

"Dangerous Girl" is likely the anthem for the band, and the bluesy, bump-n-grind groove is rather "I Love Rock N Roll"-era Joan Jett in its approach, while the nicely layered vocals are straight from the Vixen approach to properly stacking female voices for maximum effect.  For my money, this is the catchiest song on the record and would've worked very well on MTV's Headbanger's Ball back in the day.  Just a killer hook and groove here, with solid instrumental performances from all backing up a top-notch vocal take from McFrison.

"You Can't Stop The Rock N Roll" (not a Twisted Sister cover...note the word "the" slipped into the title here) is the one track that I had to let grow a bit, as I wasn't really sure what they were trying to accomplish here.  At times it seems they want this to be "the ballad" of the record, but then they blow it up into more of an arena anthem on the choruses...only to slow it back down again for the follow-up verses.  McFrison adds a bit of feminine purr to her vocals during the slower verse parts, only to crank the sass back up during the chorus.  My least favorite track, but that's not saying much, because I still think its a solid track that, as I mentioned, grew on me after repeated listens.  The girls' skill with their instruments is again on solid display here, especially the interplay between McFrison's blistering solo and Schecter's rhythm guitar, and it speaks volumes about the seriousness these musicians bring to their chosen art form and musical style.

"Party Hard" closes the EP in fine fashion, as the hard-charging guitars and rumbling bass power this catchy rocker through to the end.  Again, McFrison's vocals are smart and sassy, feminine-yet-not-girly in anyway, and the guitar work here, while loose and sloppy enough for sleaze, is also lively and hooky, especially on the short bridge and extended solo.  The song even takes a bit of a breakdown approach in the middle, slowing things down and becoming almost exclusively drums and bass for a short, spoken-word segment from McFrison, before ripping into another solo and then blazing a smoldering trail to the end of the record.  Very nicely done and definitely a strong impression-builder at the end of an all-too-short EP.

If these ladies manage to stay together and continue to write songs in this vein, with this level of quality, there is no doubt I will be in line to pick up whatever The Phoenix comes up with next.  Top notch performances abound on yet another high quality Italian release that fans of hard rock and sleaze would do well to seek out.

Rating:  Painfully short, but still crankable!  Give this a spin at 8!

Back To Reviews Index
Posted by arttieTHE1manparty at 11:54 AM