LIFEHOUSE "Out Of The Wasteland" 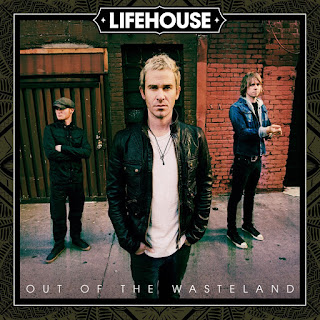 Lifehouse has never been one of those bands that I felt I had to listen to, as they generally don't really fit my preferred styles of music.  I don't hate them, by any means...I just nothing them.  If a song pops up on the radio, its not like I rush to turn it off or anything, but I also don't seek the band out.  I also can identify exactly ONE Lifehouse song without having to look it up, and that would be their huge hit, "Hanging By A Moment", which is insanely catchy melodic pop rock, not far removed from bands such as the Goo Goo Dolls or Stage Dolls in style and sound.

Out Of The Wasteland is a return of sorts for the band, who had gone on hiatus in 2013 following the relative bomb of 2012's album, Almeria.  Determined to get back to what Lifehouse previously sounded like and stood for, Wade has stated about Out Of The Wasteland that "This is full circle for us.  It really sees us returning to our roots."

But what does that mean?

Well, it means if you are a fan of the melodic pop rock sound that "Hanging By A Moment" poured out across mainstream and rock radio in 2000, you are most likely going to be very happy with where Out Of The Wasteland starts from, but even the most ardent fan may find themselves wishing for more.  The album opens with the uptempo pop rock of "Hurricane", a solid number that really showcases what people fell in love with about this band when they first broke onto the scene: strong songwriting with positive lyrics; powerful, distinctive lead vocals from Wade; solid musicianship; catchy hooks and rhythms.  In fact, "Hurricane" sounds a lot like it could have come from No Name Face back in 2000 and no one would have known the difference, as it really fits that album's style and sound.  But this also presents a problem for the band, as from this point on, there is really very little variance in their sound or stylistic direction to make anything from this record stand out.  It fails to rock, for the most part.  "One For The Pain", tries, I guess, as its another catchy uptempo number with a nice bass line and some nice vocal work from Wade, but it doesn't take any chances in its execution and instead sounds like it has been forced through a filter that makes sure that whatever comes out the other side is going to be accessible to all who hear it.  I mean, come on, the song sounds like I'm listening to a commercial for Tylenol or Advil after more than one spin, so homogeneous is its sound and approach.

"Flight", while a very well-written and performed piano-based ballad, comes across as a song that would have fit well as the climactic build-up song on the soundtrack of just about any 1990's romantic comedy.  (The album's closer, "Hourglass", by the way, could easily be the end credits track for that same song...very, VERY light and airy with little substance to grab hold of.) "Runaways" starts off nearly as softly as "Flight", but it does build a bit in the middle, providing more "rock" than the next track, which may be the most misnamed track on the record, for there is NOTHING explosive or dramatic or powerful about "Firing Squad" at all.  So straight down the middle of the road is music in this stretch that tracks 3-5 actually drift together into one big musical...movement...I suppose would be the word, with nothing really distinguishing itself from track to track.

"Wish" only slows things down even further (who woulda thought that possible), as an acoustic ballad is slid into the mix here, albeit in very short fashion, as the track clocks in at under 3 minutes, which is merciful.  "Stardust" has potential with its shared lead vocals, allowing Soderberg to step to the (co) front for a time during the verse portions of the track, but the urgency in the way the verses are delivered isn't really translated into how the song is performed, and we are again treated to another mid-tempo color-by-numbers track.  "Hurt This Way" has a neo-Nashville feel to it, minus the rock that so many country artists are mixing into their sound now. "Yesterday's Son" feels like a modern worship song (haven't I sang along with this in church?  No?  Huh...coulda sworn I had).  And, as previously mentioned, "Hourglass" is just so much air and fairy dust with nothing substantial in its performance at all.

If the album had carried ANYTHING over from "Hurricane" this could have been a decent pop-rock/soft-rock album, I suppose, but as it is, I have to wonder if Lifehouse shouldn't change their name to Lifeless, as this album is just one long lullaby after "Hurricane" closes out.  One has to seriously wonder what kind of "Wasteland" the band could be traveling "Out Of", as the record's title implies, because this is not some desolate, post-apocalyptic landscape presented here, so much as it is a field of dandelion fluff and gentle summer breezes.  Yeesh!

Based on what is presented here, I have ZERO clue how Lifehouse was actually chosen to open for Nickelback on that band's last tour, because I have to believe the entire audience was asleep before Nickel back hit the stage unless "Hurricane" was the band's closing number, with "Hanging By A Moment" being the bombastic encore.

Talented?  No question.  Passionate in their performance and songwriting?  No one doubts that.  But why this was sent to me to review I have no idea, as it is so far removed from the "rock" world that I actually put it off for several months, just to see if I would be in a different place when I returned to it.  And I was...I was in Dream Land by the time the album finished.

Rating:  Turn this down to 4 after "Hurricane" so the occasional hints of rock don't awaken you from the peaceful slumber you will likely have drifted into by record's end.