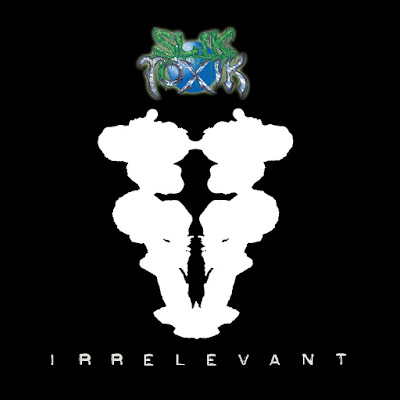 For music junkies like me, there is that never-ending search to find something new, something unreleased, or something lost.  Bands make albums all the time that get shelved, either due to contract issues, labels collapsing, musical trends shifting, bands breaking up...whatever.  And with the Internet, there is such a vast network of bootlegs, bad copies, and blatant rip-offs that it becomes a challenge to really know what is what and who is who and if you are actually buying (or for some, illegally downloading) real material from a band you love.  That's why I love labels that seek these things out and release them to the fans that have been clamoring for long lost material.

Irrelevant, the third album from Canadian sleazemeisters, Slik Toxik, was actually recorded more than 20 years ago, in 1994, but it rapidly disappeared from sales bins due to the huge change in the musical climate.  Grunge had taken over and the hairbands were dying...I don't need to give most readers the history lesson.  The thing is, however, if people had actually given this album a listen...and by people, I mean industry people...they would've noticed that Slik Toxik had already started their own shift in sound, adding heavier, darker riffs to their music, straddling the hairband world and the grunge/hard alternative world at the same time.  Not willing to completely forsake their past, but also being smart enough to embrace the future, Slik Toxik attempted to grow and expand their sound, all to no avail, as the album was quickly shelved, even in their home country of Canada.

I had heard about this album several times, and had sought it out a few times with no luck.  I loved Doin' The Nasty, their first release from 1992, and the debut EP from 1991 was solid enough, so I was wanting to complete the collection and see what had become of the band.  But never could I find an actual copy of this album, although I was told they were out there.

Perris has taken the original album, cleaned up the production a bit, added on a left-over demo from 1989, and presented the public with Irrelevant, which is probably an apt title since that is exactly how the band had to feel in 1994 when this record was recorded and then shelved.  From what I have been told, and according to the Perris press release, both "Twenty Something" and "Dive" were released as singles, but I had never actually heard them.  It wasn't until I searched YouTube and found the video for "Dive" was I even aware it existed.  Anyway, while this was briefly available in 1994, it is now once again widely available through Perris Records, and I am glad it is.

While it is definitely not the sleazy fun of Doin' The Nasty, there is still some decent material on this record, especially if you liked any of the harder, darker material many hair bands started putting out to try to survive the grunge movement.  I'm talking the better attempts here; think Skid Row on Subhuman Race, not Wildside's second album (ugh!)...or especially if you were open to the metallic-grunge of a band like Alice In Chains, in particular.  The two singles, "Dive" and "Twenty Something" are solid heavier material, with "Twenty Something" reminding me quite a bit of Facelift-era Alice In Chains musically, which is a good thing, as I am definitely an AiC fan.  Walsh will never be mistaken for Layne Staley, but that's okay because I think Walsh has a really cool voice himself.  The music has that heavy, sludgy, swirling style that Alice In Chains used so effectively, grinding away on the rhythm guitar and pounding relentlessly on the drums while also managing to work in a pretty cool guitar solo.

"Dive" is similar in its approach, although it sounds more likeAiC's second album, coming across as a fairly close relative of songs like "Rooster" or "Down In A Hole".  Walsh's vocals have an angry edge to them on this material, which actually works really well, and again the doomy, down-tuned guitars are fine with me.  The same can be said on a couple of other really good cuts like "Voodoo" and "Mother Machine".

"Just Fade Away" is a faster number than most of the music here, and traces of the old Slik Toxik can be found more here than on any other new song here, as there is a sleazy style mixed in with a funky bass line and some aggressive, albeit down-tuned, guitar work.  Walsh's vocals retain the angst used throughout the rest of this record, and he gets fairly screamy at the end of the track, wailing away as the song closes.  "Liquid Calm" lightens the musical mood a bit, incorporating some nice acoustic guitar atop a pretty cool bass line, but this and "Just Fade Away" are really the only stylistic changes the band utilizes throughout the record with the exception of the demo for "White Lies/Black Truth", which was added as bonus material for this reissue.  That track, which eventually made it onto ...Nasty sticks out like a sore thumb, as you might imagine, as it is stylistically nothing like the rest of the darker material included here.  It's a nice add-on, however, that I just ripped and then burned onto a CD-R copy of ...Nasty which allows me to keep my original in top-notch condition.

Look, if you are not open to what was going on in the 90's musically...and especially if you can't embrace bands like Alice In Chains, Mother Love Bone or Stone Temple Pilots, you are likely not going to like this final effort from Slik Toxik.  The record is going to sound very samey to most people, with very little change in style and only occasional fluctuations in tempo other than the couple of exceptions I mentioned here, but that was not uncommon with the grunge artists of the same time this record was originally released.  It is not a "fun" or "good time" record at all, and it is definitely not hair/glam/sleaze or any other sub-genre of the Hollywood metal scene, so if that is all you are into, skip this record.  As for me, I like and appreciate all different styles of hard rock and metal, hence the name "Glitter" to "Gutter", and yes I like a good deal of grunge.  So, with that being said, Irrelevant is not as irrelevant for me as it might be for others.  And yes, the play on words there was intentional.

Rating:  I give this a rare SPLIT rating, simply based upon the potential listening audience.  Crank this if you are into grunge at all...especially AiC (which isn't grunge, but that's another arguement)...and I'd give it a solid 7.  Hair/glam/sleaze-only fans will want to turn this down to 4, otherwise, as it will do nothing for these people.

Posted by arttieTHE1manparty at 8:57 PM