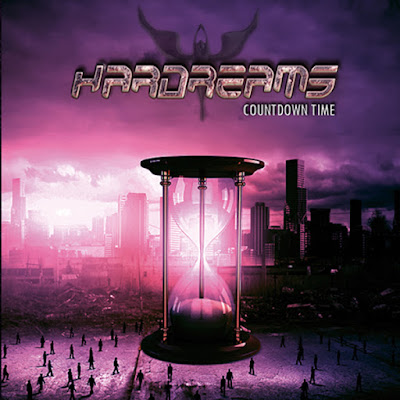 Hardreams is a band that has been around for a bit now, with Countdown Time being their fourth CD release...yet I've never heard of them, which is a bit odd, at least to me, as I follow Perris Records fairly closely.  Be that as it may, this new record features a few new things for the band, with the addition of Garcia as the new keyboard player being the biggest issue, at least as far as the music goes, for this Barcelona-based act.

Hardreams would best be described as a melodic hard rock band with AOR tendencies, especially with their liberal use of keyboards both as a supporting instrument and as more of a main player in spots.  Case in point is the relatively long keyboard intro to the opening track, "Fire Child", which carries an odd 70s inspiration to it, before the guitars and drums hit at about the 40 second mark, transforming the song into something that resembles filler material for the better Malmsteen records...minus the top-notch guitar work.  David Aguera is a competent axe-slinger, no doubt, but Malmsteen he is not.

"More Than One Life" is a decent, but not exciting rocker with some solid drum work from Hormingo and a decent solo from Aguera.  Lead singer, Esteve, uses a somewhat accented, lower-to-mid-range tenor throughout this song, reminding me at times of John Waite's vocal approach, especially with Bad English, but lacking the overall quality of Waite's vocal command.  I think part of the issue is that Esteve handles not only the lead vocals, but the backing vocals as well, so there is little variation in dynamics or tone, making the backing vocals relatively flat and lifeless and not serving to enhance the lead vocals.  Think of heyday Dokken without Pilson backing Don up...a lot of the dynamic effect of the vocals would be gone.  Such is the case here...and throughout the record, really.

"Best Days Of Our Lives" sounds like it comes straight out of the 80s as far as the song structure, and even the production, with a lot of that era's Journey just oozing out of the way the song is put together and performed.  The problem here is the vocal limitations of Esteve, who sounds as if he really struggles to hit the higher end of his mostly mid-tenor range.  There aren't any breaks to his voice, but some of the notes really come across as forced and unnatural, which is a pretty big distraction to an otherwise very nice piece of melodic rock.  The song contains both a keyboard and guitar solo, both of which are decent, if not spectacular, and the laid back attitude of the song takes me back to the summer nights of my youth, hanging out around a bonfire with the hard rock and hair metal heroes of the day doing their best to help you snuggle up next to the girl of your choosing.

"Into Our Dreams" picks the pace back up, and puts Esteve back into a much more comfortable style and range vocally.  The keyboards are pushed more into the background once again and the driving guitar line really pushes the agenda for this song.  Again, Aguera flashes some solo talent here, and the rhythm section is solid throughout.  Definitely one of the better tracks here, "Into Our Dreams" is the kind of song that a band like Hardreams should focus on building an entire album around, in my opinion.

"Summertime" is an okay pop-rock number, but it sounds rather cliche and dated, as does the following track, "Give Me", which has elements of 80s Whitesnake in the mix, but too many out-front keys damage the song for me.  The title track is decent, with a nice slow build from an acoustic guitar accompanying Esteve's vocals to a full-band rocker that unfortunately still comes across as dated and "been there, heard that".  There are some flamenco guitar elements mixed into the solo/bridge portion of the song, but there is just nothing that really grabs hold of the listener for any significant amount of time.

The band saves some of the best songs on the record for the end, starting with "Crying".  The song takes a different guitar tone...which honestly reminded me of Hootie and the Blowfish the first couple of times I played it...and mixes in some Hammond-sounding keys in the background to nice effect on a mid-tempo rocker that isn't marred by Esteve's vocal limitations.  There is one spot near the end of the song, in the last repetitions of the chorus, where there appear to be effects added to Esteve's vocals which are absolutely TERRIBLE and nearly destroy the track.  "Soul Mates" is actually one of the best songs here, with more energy and "oomph" than just about anything else on the record, and would pair up well with "Into Our Dreams" as nice book-ends to build a record around.  Album closer, "Light And Shadows" reminds me of the slower-tempo, non-single material that Dokken was putting on their albums post Back For The Attack, and is a decent way to end a rather off-and-on album.

Fans of bands like Magnum, Ten, Magnitude 9, or even earlier Harem Scarem will possibly find things to like about Hardreams, but never does this album reach the level of the best material from any of the previously mentioned bands.  The songs, while decent overall, lack the real punch that would put this album over the top, and Esteve's lack of vocal comfort on several songs set back a few of the songs that may have bumped this album up a notch or two in the rankings.

Definitely not horrible, just not overly memorable, Countdown Time is an album that would likely blend into a mix and not even really be noticed, as even the better tracks here would be filler material for more accomplished acts.

Rating:  Rock this to a decent, if unspectacular, 5.5.

Posted by arttieTHE1manparty at 11:09 AM