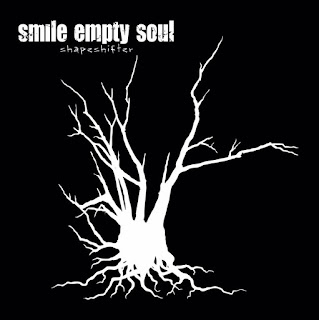 Smile Empty Soul, the modern rock power trio from Santa Clara, California, are set to release a new EP/DVD combination on their fans, combining three brand new songs with three of the band's most well-known...and hardest to find...songs in one mini-album, Shapeshifter.  Retaining 2/3 of the band's original line-up, (Kilmer joined the band in 2006), the band's trademark angry, post-grunge brand of modern rock still translates well in today's hard music world, although there is no one on the airwaves, satellite or terrestrial, that I have heard who sound like Smile Empty Soul, either on their old material or these three new songs.  As such, the three new tracks here promise to tide fans over until the band is able to put together a new full-length album, while the three classics will give new fans a chance to catch up on what they may have missed.

The EP starts off with the three new songs, followed by three classic re-recordings.  "All In My Head" is a bottom-heavy, mid-tempo rocker, with a strong, haunting guitar line, throbbing bass presence, and simplistic-yet-fitting drum work that all combine to complement Danielsen's ability to "shapeshift" his vocals from clean singing on the verses to the harsh screams that he scrapes across the chorus.  "Running Out Of Something" is somewhat more urgent in its structure, and with the way Danielsen employs his vocals, the track actually reminds me a bit of the music Live was putting out in the late 90's and early 2000's.  My favorite of the three new songs, "Running Out Of Something" manages to come across as edgy and distorted, yet melodic at the same time.  It's not over-produced or polished, sounding raw and stark, and it carries the perfect edge of anger in the vocals with a nice grit to the guitar tone.  "Just One Place" continues in that more melodic alt-rock vein, dropping some acoustic guitar into the mix for good measure, and once again sounding like an angrier version of Live to a degree, which, for my money, is a good thing.

The last three songs here are re-recordings of the three songs that casual fans of the band are probably the most familiar with.  I was unaware of  the fact that the Gold-selling (500,000+ units) debut album, Smile Empty Soul, has actually been out-of-print and unavailable for purchase for quite some time now due to legal wranglings with the band's old label.  As such, the last three tracks here are not available for purchase, download, or streaming at present, and as is often the case in label disputes, the band no longer owned the original recordings of those songs.  So, in an effort to give the fans what they wanted and had been asking for, the band re-recorded these three classic tracks, staying as close and faithful to the original as possible 12 years after they were first recorded.  They succeeded, by the way, as all three sound excellent in their newly recorded form, with "Bottom Of A Bottle" sounding particularly re-energized to my ears, while "Silhouettes" manages to sound even angrier and more urgent than in its original form.  Danielsen has no problems recapturing the angst and snarl that made that song such a powerhouse hit at radio in 2003 (it charted Top 10), and the rhythm section of Martin and Kilmer just crush the bottom end of all three of these remakes, giving them a punch not necessarily there in the 2003 versions.

I do not have the DVD for review at this time, but I am told it contains a music video, a mini-documentary on the making of Shapeshifter, and previously unreleased video from past tours, recording sessions, and video shoots.

Also, as my copy is a digital advance copy, I do not have access to liner notes or packaging information.

Fans of Smile Empty Soul will likely latch onto the new songs instantly, as the band retains their own signature mixture of introspection, anger, frustration, and in spite of it all, hope, in their lyrics and musically they continue to sound like no one but themselves.  All three of the new songs could find themselves in the same place that the three older songs did, which is in the Top 25 of the modern rock charts, proving that old(er) things can become new once again and remain relevant, which Smile Empty Soul proves with the tasty little EP, Shapeshifter.

Rating:  Not earth-shattering or world-changing for the band, but very solid and very much in line with the better stuff the band has done.  The re-records are an excellent touch!  Crank it to 7.5!

Back To Reviews Index
Posted by arttieTHE1manparty at 3:43 PM