VARIOUS ARTISTS "A Celebration of the Death and Resurrection" 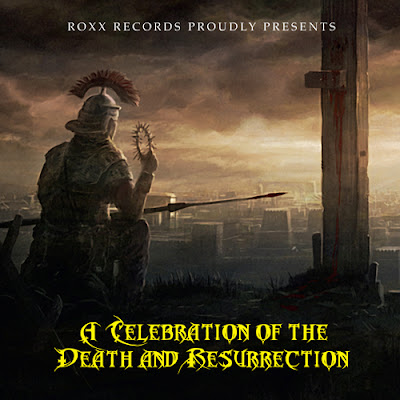 Normally, compilation CDs aren't really my thing.  Typically, you get one or two decent artists with a couple of good songs, then you get a bunch of filler material from bands you have never heard of.  They also don't typically hold up over time very well, as the same songs in the same order gets rather old fairly quickly...at least for me.

Roxx Records has done something completely different here, however, with their latest release, A Celebration of the Death and Resurrection, an appropriate compilation of largely classic Christian metal bands, along with a few current artists, telling the story of Christ's judgement, crucifixion, and resurrection in one awesomely loud collection.  Sequenced perfectly to tell the story, these 14 songs were selected for their message, as well as for the talent level of the bands performing, and Roxx has delivered the goods in a big way here!

The disc starts off with a brief, 3 minute long message from Pastor Bob Beeman, who has long been well known through his work with the Sanctuary International Church and the Christian metal community in general.  Personally, I would have moved this to the last track on the CD, as I am not a fan of intros of any kind, as any reader of G2G is fully aware.

Musically, the album kicks off with the scorching "Crucify", taken from Bloodgood's highly acclaimed 1987 album, Detonation.  Classic metal sounds are enhanced by the theatrics portraying the trial and judgement of Jesus Christ before Pontius Pilate.  Despite being nearly 30 years old, the song has not lost any of its power through the years, and Les Carlen's raspy screams, backed by the shouted gang chorus of "Crucify!" set the perfect tone for the miraculous story being presented here.

Neon Cross was a contemporary of Bloodgood, and they follow with one of their most powerful songs, with "Son Of God", taken from their original demo and the 1987 classic compilation, California Metal.  Again, the song is in the classic heavy metal vein, with some excellent guitar work from Don Webster, and powerful, clean vocals that soar from the speakers in a way not many acts have used in a long, long time.

Speaking of powerful vocals, Rey Parra is featured on the next two tracks.  First is "He Died" from his original band, Sacred Warrior, with "The Last Cry" being a recent track from his new band, Worldview.  "He Died" starts off as a a somber, keyboard-laden ballad that eventually kicks the power up with pounding drums and excellent melodic guitar work as is showcases the operatic style that Parra was so rightfully praised for, bringing elements of Queensryche and Crimson Glory to the Christian metal sub-genre.  Parra's new band, Worldview, formed with fellow Christian metal hero, George Ochoa of Deliverance and Recon, packs a power-meets-progressive metal punch with "The Last Cry", from last year's Top 10 album, The Chosen Few.  An awesome song that sees the return of Parra to the music scene after several years away, "The Last Cry" is a mid-tempo masterpiece, to be sure.  The vocal power is still there, no doubt, and the band as a whole delivers in a big way, from the pulsating bass lines to the thundering drums...and of course, Ochoa's power chords and skillful solos.

Sticking with that power/progressive style is Theocracy, one of the most musically gifted bands to hit that particular scene in some time, in my opinion.  A high speed adrenaline rush of a song, 30 Pieces of Silver" recounts the betrayal of Christ by Judas Iscariot for the sum mentioned in the song's title.  Taken from the band's 2011 album As The World Bleeds, "30 Pieces..." is a scorching piece of metal, showcasing not only Matt Smith's powerful, clean, soaring vocals, but also the blazing guitar work of axe tandem Val Allen Woods and Jonathan Hinds.  If you have never sought out this band before, this song would be a great introduction to what you will be treated to!

"World Covered In Blood" is the title track of the 2008 album from AC/DC sound-alikes, X-Sinner.  It is almost uncanny how much lead vocalist Rex Scott sounds like Bonn Scott, and the raunchy rock and roll grind of the hard rocking guitars will have heads nodding, feet tapping, and fists pounding almost instantly, especially once the simple-yet-oh-so-catchy chorus hits!  A great track to include here to introduce people to this relatively unheralded band that has actually been around in some form since 1989, believe it or not!

One of the truly classic Christian metal bands of all time, Saint, follows up with "Crucified", taken from incredible 2012 album, Desperate Night.  Often called the "Judas Priest (ironically) of Christian metal" due to lead vocalist Josh Kramer's powerhouse screams and excellent range, this American heavy metal band hit the scene in the very early 80's and continues on to this day, although with a revolving door line-up and, now, a new lead singer.  Be that as it may, Saint and their founding member, bassist Richard Lynch, has long carried the torch of classic metal, only very rarely making a misstep along the way, and "Crucified" shows that even 35+ years into their illustrious career, Saint was still making powerful metal with a powerful message!

Things get thrashy for a bit from this point on, starting with second-wave thrashers, Ultimatum, and the crushing "Violence & Bloodshed" taken from the band's blistering neck-snapper of an album, The Mechanics of Perilous Times from 2001 (later reissued in 2007).  Scott Waters' raspy snarl combined with the relentless guitar assault of Robert Gutierrez was long a hallmark of this band, and both are in fine fashion here!  Often compared to Overkill, largely due to Waters' style, Ultimatum was one of the heaviest, fastest thrash bands of their time and their inclusion here, among so many all-time greats, is truly deserved.

If Ultimatum was second-wave thrash, then Grave Forsaken would likely be considered third-wave thrash.  A bit slower in tempo, and considerably lower in vocal range, this Australian thrash band contributes "Death On The Cross", a song which needs no further explanation as to why it is included in this compilation.  The vocals of Vaughn Gregory are very reminiscent of the more recent material from Australian death metal/thrash metal legends Mortification, and the slower speed and straight forward lyrics only serve to add to that comparison...which is not a bad thing at all.  Taken from 2006's album, Beside The River Of Blood, "Death On The Cross" is a worthy addition to this project from one of the new torch bearers of the Christian metal scene.

While on the subject of thrash metal, it is well-known that the "Big Four" are Metallica, Anthrax, Slayer, and Megadeth.  However, in the Christian metal realm, the "Big Three" would be, without question, Deliverance, Vengeance Rising, and Tourniquet, the next three bands up on this album.  Deliverance kicks off first with "Flesh and Blood", which comes from their epic sophomore album, Weapons Of Our Warfare, from 1990.  Many consider the pairing of vocalist/rhythm guitarist Jimmy P. Brown II and the previously mentioned guitar shredding hero, George Ochoa (Worldview), to be one of the most creative, most powerful forces in Christian metal history, and this album to be their crowning achievement.  With this song, it is easy to see why this distinction is made, as Jimmy's insane vocal range is put to full effect here, along with the uncompromising, blistering speed and skill put on display by Ochoa.  Check this track out...and then seek the band's catalog out!  You will not be disappointed in any fashion!

Vengeance Rising, I suppose, would be the Slayer of the group, as they were the most controversial, the most menacing, of the Big Three, both stylistically and musically.  Roger Martinez used a snarling, growling, howling vocal style that was indecipherable at times, but also equally entrancing as the band raced along at a breakneck pace that both thrashers and punks could be proud of.  This song, "Human Sacrifice", was the title track of the band's debut album from 1986, which was one of the fastest, heaviest records of the mid-80s thrash scene, Christian or secular.

Tourniquet, the final name on the Big Three list here, added a progressive element to their thrash style and sound, but the song contributed here is not thrash at all...nor is it even really metal.  Largely acoustic (minus the nearly distortion-free guitar solo and outro), "If I Was There" talks about Christ carrying the cross up the hill at Cavalry and what that sacrifice means to the song's narrator.  Taken from the 1997 release, Crawl To China, this song is a somewhat odd inclusion style-wise, but lyrically fits nearly perfectly into the narrative of this album.

Fear not, metalheads, as the amps are cranked back up to 10 on the next track, "Alive", the third track to feature axe-slinger George Ochoa, this time with his power metal act, Recon.  Taken from Behind Enemy Lines, the only studio album this band ever released (at least for now!), "Alive" is the story of the tomb being found empty after Christ's resurrection.  Always seemingly paired with a vocal force to be reckoned with, Ochoa is again in fine company here, as Vett Roberts seems to have studied his Geoff Tate/Jimmy Brown/Rey Parra notes, as he delivers a vocal performance on par with much of the work done by these highly respected artists.  And...you guessed it...a blazing solo rips through the mid-section of this track, completing a nearly flawless metallic masterpiece!

The album closes with one of the most powerful tracks in Christian metal history, as far as I am concerned, in Bloodgood's "Messiah".  The emotionally-drenched vocals of Les Carlsen are achingly haunting here as he describes the removal of Christ's body from the cross, the care given to the body of the crucified Savior, and the emotions of the people present at both the crucifixion and the resurrection.  Just a beautifully delivered classic metal track that, on the Detonation album, tracks seamlessly out of the first song on this compilation, "Crucify".  How fitting that the bookends of this compilation are two songs so closely related in their original form, and what a truly unforgettable way to bring the project to a close (in its presented form; again, I would have moved Pastor Bob to the end of the project...).

While it is a narrative of the Easter season, A Celebration of the Death and Resurrection is also a primer for metalheads who are not well versed in the Christian side of the genre, for people looking to explore new bands, or for those who simply want to hear a sampling of music they likely had not been exposed to previously.

I cannot speak to the packaging at this time, as my copy is an advanced digital download, but I will address this when my physical copy arrives.  Typically, however, releases from Roxx Records are among some of the best in the industry in regards to packaging and inserts and notes, so I have little doubt that this release will be equally top-notch.

Rating:  Amazingly crankable, as both a flash trip through my metallic youth, and as a metal rendering of one of the most important stories in history.  Crank it up to 9, which is high praise from me for a compilation album!

Posted by arttieTHE1manparty at 12:03 PM