ASHES REMAIN "Let The Light In" 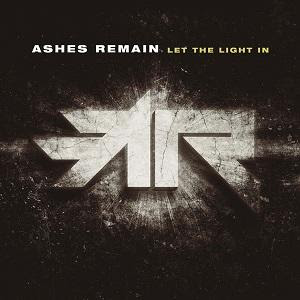 Easily one of my most anticipated modern rock releases of 2017, Let The Light In is the first new album by Christian rockers, Ashes Remain, in more than 6 years.  Following up the excellent What I've Become wasn't originally supposed to take this long, but outside of a Christmas EP, and one digital single, 2014's "Here For A Reason", there has been very little heard from the Ashes Remain camp in that time, and I was starting to get concerned this album would never actually come to fruition.  Picking up where the last album (and single) left off, Let The Light In is a solid post-grunge modern rock album, composed primarily of uptempo rockers or somewhat mellower praise and worship styled tracks.

The album's opener, and lead single, "Rise" falls immediately into the harder-edged camp and is a perfect bridge from their last album into this one.  A ringing guitar leads the band into the mid-tempo rocker, pulling behind it the drums and rhythm guitars, clearing a path for the powerful, emotive vocals of Josh Smith, a strong tenor with just enough wear and tear around the edges of his voice to connect with the modern rock crowd.  Rob Tahan incorporates some tasty solo work into the grungy track, layering atop a solid rhythm section of Kirk and Hively.  To say I was stoked after hearing this track would be an understatement.

"On Fire" was a bit harder for me to get into at first, especially with its programmed horn section, presumably courtesy of Mikey Howard of 7eventh Time Down, who also produced, edited, and recorded the album.  A bouncy rocker with a bit of a swing feel to it (courtesy of said horns), "On Fire" is a song about casting off past failures and moving forward.  Not my favorite track by any means, but not a skipper, either, and it has grown on me with repeated listens (my kids love it).

"All Of Me" is the first track to find the band dipping their musical toes in the more praise and worship styled sounds of the record, although it is still a pretty solid rocker.  A powerful song with a strong message, there is a lot more polish on this track than the previous two, and it reminds me a lot of the p&w material that Kutless has incorporated into their more recent efforts.  The same can be said of the next track, "Always Faithful", which is the first ballad on the album.  As with so many of the songs on the record, "Always Faithful" appears to be about issues of depression and addiction and the darkness associated with these things, and the band's belief that Jesus Christ is the one true way out of that darkness.

The rock returns in full force with the hardest track on the record, "Six Feet Down".  Complete with some excellent, hard-edged guitars...including a really nice solo...and even some backing screams in places, this track is exactly what I was hoping for from Ashes Remain, and it is easily one of my four favorites on the record.

"Greater Things" treads musical territory that is not all that different from some of the things that 7eventh Time Down incorporated on their last album, #GodIsOnTheMove, also carrying that Kutless praise and worship style that I alluded to earlier.  Singing about how little things can make big differences in the world, Smith's vocals ring particularly clear on this track, all the raspiness and edge seemingly removed here.  Again, not a bad song, but I will admit that at this point I was starting to get a bit anxious to hear a bit more rock from the boys, as three of the last four tracks had fallen into CCM territory and away from the edgy modern rock I fell in love with on their last album.

"Captain" rectifies things with the catchiest song on the album and one that is so odd, so quirky, and so unlike anything else on the record, I fell in love with it instantly.  A song about addiction and alcoholism, Smith declares "I've seen the bottom/drowning in a bottle/I've been dead and hollow/Nowhere to fall, Nothing at all, Hard to swallow" in a way that leads the listener to believe he knows exactly what he is singing about.  Once again, the issues of addiction are addressed so directly and honestly here, it is truly a breath of fresh air, even when dealing with such dark topics.  Rhythm guitarist, Ryan Nalepa, actually provides some co-lead vocals in the form of a kind of free-form scat style that only serves to add to the offbeat nature of the track.

"Criminal" is another top-notch rocker filled with down-tuned guitars and a pulsating bass line, slipping into the top four tracks here alongside "Captain", "Rise", and "Six Feet Down".  Once again, this is the perfect song to help carry listeners over from the last album, delivering a grinding rocker that would also grab the attention of fans of bands like Decyfer Down , Relentless Flood, or Seventh Day Slumber.   Really good, edgy, buzzy hard rock with some solid rhythm guitar work and yet another nice solo from Tahan.

The album closes with two more mellower tracks, in "Follow" and "All I Need".  "Follow" utilizes a string section (possibly a programmed one, I'm not an expert here), in a song about surrendering oneself in order to fully follow Christ, while "All I Need" is a piano-based ballad about romantic love, commitment, and a relationship that endures through a lifetime of marriage.

The packaging is pretty basic, but it covers all the bases, as well.  Lyrics are included for every song, along with the typical writing and production credits.  There is a single band photo included in the booklet, and a thank you section from the band and each individual member is located under the clear jewel case tray.

The production here is really strong, which I would imagine was quite the task when you take into consideration the two completely different styles of music included on this album.  Gritty and heavy in all the right places, yet also smooth and clean on the praise moments, Let The Light In is an album of varying tempos and textures, which I am sure led to some challenges for not only the production team, but for the band, as well.

In the end, I found myself really enjoying a bit more than half of the record, and appreciating and accepting the rest for what it is...basically a pretty good, rocking record with praise and worship elements.  The problem for me, I think, is I had such high hopes for this record that I'm not sure it could deliver. The previous album benefits from having 12 tracks, which allows for a couple more hard-edged moments to liven things back up when the softer moments threaten to drag it down.  Perhaps including "Here For A Reason" would have proven a help to a degree, and would have given non-digital fans (like myself) a way to have that song in CD form.  However, even if another two or three really good rockers were included here, I don't think Let The Light In stood much of a chance of living up to What I've Become, which is just so, so good, in my opinion.  That being said, Let The Light In has enough really good moments to keep it from becoming just an average record for me.

Rating:  Crankable, but a bit behind their last album, give this a 7.