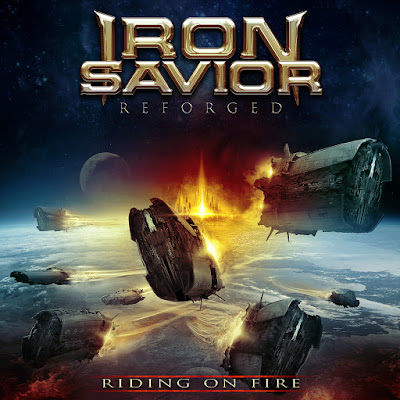 Everyone has a guilty pleasure band, right?  One that doesn't necessarily fall in line with the majority of your listening choices, but that you can't help but pop in from time to time, even if its just to get that instant smile going on?  For me, that band has long been German power/speed metallers, Iron Savior.  In general, I am a very casual power metal fan, outside of bands like Helloween, Blind Guardian, Metal Church, and a small fistful of others, but Iron Savior is one band that I have always sought out when new material was being released because...well, because I just like their style and sound so much!  So, when I heard that the band was recording a 2-CD set of their best material in re-recorded fashion, I was immediately interested and knew I would be seeking the set out.  Thankfully, I had this review copy show up in my email inbox about two weeks before it would be released, so I got a bit of an early Christmas present, it would seem.

Iron Savior finds themselves in the same boat that so many bands are in these days; they have lost control of their back catalog.  Usually due to bad publishing deals or one-sided contracts, a lot of bands find themselves no longer owning the rights to their old albums, so they face a dilemma when it comes to their classic material.  With the band now being 20 years old, with 10 proper studio albums (and a 2015 re-recording of the Megatropolis album), along with a live album, there is a vast amount of material that fans had been requesting to be reissued, but the band's hands were tied by their old label, Noise Records.  So, the band did the only thing they felt they could do...they re-recorded 19 of their biggest songs for this new collection.

The performances here are top-notch, with blisteringly fast rhythm guitar work, blazing solos, and some excellent drumming from brand-new drummer, Klose, who joined the band just prior to the undertaking of this album (talk about a trial by fire!).  Sielck's voice is as snarling and menacing as ever, and the bass work from Eckert is understated yet powerful, helping to glue the band together into the powerful metal machine that they truly are.  Also present are the big backing vocals, especially on the song's choruses, which have become a hallmark of not only Iron Savior, but so many German power metal bands.  I have to admit that I am always a bit leery about bands re-recording past material with new members, but this version of Iron Savior pulls off the classic material exceptionally well, which should come as no real surprise, I suppose, since Kustner has been in the band since 2000 now, and Eckert is on his second stint with the band, having played with Iron Savior from 1997-2003, then rejoining in 2011.

Obviously, with a re-recorded collection such as this, the broad story line that all of the band's albums through Condition Red have told (they are all part of one HUGE science fiction story line) cannot be followed lyrically, nor should it really matter, as only the truest, die-hard fans likely know what the story is about.  Even so, the lyrics are bold, powerful statements in their stand-alone settings here, offering up typical power metal themes of battle, bravery, standing up for what's right, etc., which Sielck, the band's main songwriter, has always done well.

The production here is excellent, and the recordings are, in every instance, superior to the originals, in my opinion.  Even the classic Condition Red material sounds better to me in this re-recorded state, and that says a lot, as Condition Red is not only my favorite Iron Savior album, but one of my top five power metal albums in my collection.  I truly love that record and was extremely happy to see it not only so well-represented here, but also to hear it executed so very well.

I was a bit surprised to see that none of the new tracks from the 1999 album, Interlude, made it onto this collection, as that record is also on Noise and those songs are, as such, unavailable elsewhere.  I realize not every great song could be included, and as it is, this two disc set stretches to nearly 100 minutes, but I still would have liked to have heard "Stonecold" or "The Hatchet Of War" included, along with perhaps another track from Unification, such as "Forces Of Rage" or "Unchained".  Still, as it stands, this is a nearly perfect collection and an amazing primer for any new fans who want to check out the band's earlier, classic material without paying ridiculous prices...if they can even find the originals in the first place.

Rating:  So, so good, I can't fairly treat this like a new album, as it is re-recordings of classic material.  I would still consider it crankable, however, turning things up to 8.5.

Back To Reviews Index
Posted by arttieTHE1manparty at 12:27 PM