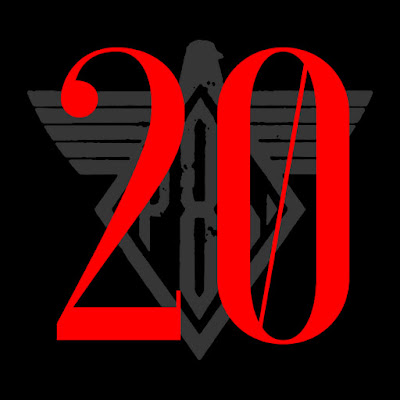 In anticipation of their twentieth anniversary, Project 86 launched a PledgeMusic campaign to fund a brand new album, set for release at the end of 2017, called Sheep Among Wolves.  As part of that campaign, contributors received a digital EP called The Influence EP.  Whether this EP will be included on the new album or not, I am not sure at this time, although it would seem there should be plenty of room, as the album is said to include just 10 tracks, and the total running time for this EP is only slightly over 18 minutes.

As far as the band goes, lead vocalist only vocalist/lyricist Schwab remains from the original line-up, with the other three members all coming on board sometime between 2012 and 2014.  However, after seeing the band perform live last year on the CityRockFest tour with Disciple and Seventh Day Slumber, I can report that the group sounds very tight and cohesive...and heavy as stink!

This EP, as you can see from the tracklisting, is made up completely of cover songs, from multiple styles of music.  I was a bit taken aback by some of the choices here, for various reasons.  For starters, when I saw "Sabotage" on the list, I was instantly curious as to whether or not Schwab would stay lyrically true here (there is an f*bomb dropped in the original).  He did not, choosing to drop the word from the song, which I feel was definitely the right call, as Project 86 has long been linked to and associated with the Christian hardcore/metal scene, and using language that listeners would find offensive would not serve the project well.  As far as the song goes, the band plays things pretty close to the original, although it may actually be a bit heavier than the Beasties' original, and Schwab definitely has lower-ranged vocals than on the original, but this cover makes total sense, style-wise.  I can tell you that they played it live last year and the crowd went nuts, as the song has become so much bigger throughout the years than it was when it was originally released, as it has been repeatedly used in movies and other media.  An excellent start to this EP, to be sure!

"Fell On Black Days" is a cover of Soundgarden, and the band definitely expands their sound here, taking on a far more electronic style on this grunge ballad.  For those familiar with Project 86's past, the approach on "...Black Days" is similar to that used on the Rival Factions album, and on a few scattered songs throughout their catalog.  As a fan of a lot of grunge, I was anticipating not liking this version, but I was wrong, as I think this altered interpretation gives the song new life.  In fact, I think this is probably my favorite track on this release (although it is hard to go up against "Sabotage"!).  Schwab is able to really crank up the anger in his vocal approach here, and the down-tuned guitars intermixed with the electronic elements really drag a dark atmosphere across this song, which, let's face it, is rather dark in its original form.

"Facet Squared" is a Fugazi song that, much like covering the Beastie Boys, makes a lot of sense for Schwab and the band.  The punk stylings are still present here, although there is more bottom end and crunch here than on pretty much any punk/hardcore song you will find from this track's original time period.  Still, this is a track that probably most closely fits in with a lot of Project 86's catalog, and is not really a stretch, musically, which is likely why the band sounds so comfortable here.

The last two songs are seemingly completely out of left field, as "Man Of Constant Sorrow" is, originally, a traditional folk song that was given life in bluegrass form on the movie Oh Brother, Where Art Thou?  Now, I hated that movie, and being aware of the song's folk/bluegrass roots, I had no idea how this song would be tackled.  Much like they did with "...Black Days", Project 86 turns this track into something rather electronic in nature, not messing around at all with the bluegrass arrangement, although Schwab does make a humorous lyrical alteration that you can pick up on if you listen closely (you may need to look up the original lyrics to find his changes).  This song had to grow on me a bit, as there really is very little heft to the track, and the drum loops and programmed elements are not really parts of the musical landscape I tend to tread.  It reminds me quite a bit of the stuff Nine Inch Nails was doing about 20 years ago, stylistically, and while I have come to not hate it, it is definitely my least favorite track here.

"Strange Fruit" is a cover of an old Billie Holiday blues number from the Great Depression era, and again, something not at all like anything I would imagine P86 attempting.  Schwab actually spends the vast majority of this track singing, abandoning his hardcore shouting/barking, as he glides across the piano and atmospheric electronics applied here.  There is some cool, bluesy guitar used here, that I really enjoy, and I think this is a nice inclusion to show that there is so much more to Andrew Schwab and Project 86 than the downtuned guitars and brutal breakdowns they are commonly associated with.  While I likely wouldn't buy it, I would not be at all surprised to learn that Schwab decided to do an entire album of blues covers such as this, as he definitely shows an affinity for this vocal approach which is SO different from his norm.  This is a pretty cool way to end such an eclectic set of cover songs, in my opinion.

As I mentioned, this is a digital release, so there are no liner notes to review here.  In fact, the image above isn't even an actual album cover; I had to search the internet for an image and this one came up in multiple places, so I borrowed it for this review.

This is definitely an interesting and eclectic mix of covers, all presenting different styles, and different challenges for the band, as well.  It's fun to hear the guys tackle these tracks with unique approaches, as it would be very easy (I imagine) for the band to do the "safe" thing, and just blister through them all, making each song a crushingly heavy, down-tuned jam, rather than take interesting and unique approaches to each.  If for only that reason, Project 86 should be commended for not taking the easy way out.  However, there is so much more to commend the band on in these short 18 minutes, as they have created what I feel is an essential part of the Project 86 catalog that is well worth the PledgeMusic donation.  By the way, you can still submit a pledge and get this EP if you wish to, by clicking here.

Rating:  Definitely a crankable 18 minutes; give this a 7.5, but don't think you have any true idea of what you are about to embark upon, stylistically.