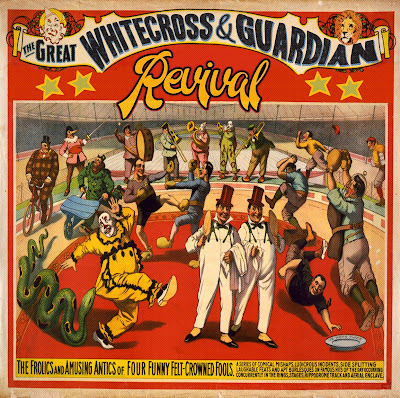 Sometimes, believe it or not, bands will do something simply to have fun.  There's no hope of a platinum record award or some big massive recording contract.  Sometimes an album is made because the guys genuinely get along, have common goals, and just want to get together and jam.  Such is the case with the rather unimaginatively-named Guardian & Whitecross album, Revival.

Consisting of the lead vocalist and bassist of Guardian, and the guitar player and drummer of Whitecross, G&W is a combination that makes sense if you know anything about the Christian hard rock scene of the late 80s/early 90s.  The two base bands were among the most talented of the non-Stryper bands, with Carroll regularly being pointed to as one of the legitimate guitar heroes of the genre, Christian or secular, and Rowe being held in such high regard as a vocalist that there was some belief he would replace Stephen Pearcey in Ratt at one time.  Add in the fact that Bach and Feighan make up a seriously formidable rhythm section, and you have the makings of what could best be described as a "super group", even though a lot of people likely don't know who more than one or two of the members are.

This mini-album consists of three Guardian tracks (2, 3, and 7, which is a Spanish re-recording of "Never Say Goodbye"), three Whitecross tracks (1, 4, and 5), and a cover of the Jimi Hendrix classic, "Spanish Castle Magic".  Of the six main tracks, the Whitecross covers, if you want to call them that, are probably the most interesting, as it is rather unique to hear Jamie Rowe's vocal take on songs that previously featured Scott Wenzell on the microphone.  While both have a raspy vocal approach, Rowe tends to sing a somewhat lower tenor register with a blusier take than Wenzell's more straight-forward hair metal approach, which gives the Whitecross tracks a somewhat different overall feel.  Obviously, the guitar heroics from Carroll are superb here on tracks that I am certain he has performed hundreds, if not thousands of times, and Feighan's drumming is dynamic and holds a comfort level that can only be attained through multiple runs through a song.  Bach finds himself slipping right into the pocket on bass, adding some nice beef to the bottom end of the songs, which is especially noticeable on "Enough Is Enough", which comes from the debut album from Whtiecross, which suffers a bit from the recording methods and mixing styles of a small label (Pure Metal Records) in the mid-to-late 80s.  I really enjoy Rowe's vocal take on this track, as well, and I think it is the standout of the three Whitecross tracks.

On the Guardian side of things, the songs feel more familiar to my ears, largely because the right singer is hitting the right notes on these tracks.  It is interesting to me that both Guardian songs came from their Fire And Love album, especially since that album has just been reissued, so there is a chance these tracks are resurfacing in a couple of different forms now.  There are some rather noticeable differences, however, on these new G&W recordings, especially in the backing vocals department on the bluesy rocker, "The Rain".  If I had to guess, the backing vocals were done in relatively few takes, and it wouldn't shock me to learn that they were done in only a single take, as they are not particularly strong or layered.  In fact, they remind me very much of the way a lot of bands' backing vocals sound in the live setting, when not recording tricks or multiple tracks are used to boost the feel and sound.  They don't sound bad, per se, but they are definitely weaker than on the original album.

The ballad choices here are interesting for a couple of reasons.  First, Whitecross was never known as being particularly strong on their ballads, especially early in their career, so going with "In The Kingdom" was a smart move on this group's part, as it is probably the best ballad the band has ever done and has more power and grit to it than so many of the overly-saccharine ballads the band recorded on their first couple of records.  That being said, the big, layered backing vocals from the original are missing here, much like I mentioned in my review of "The Rain" above.  For Guardian, a band that was known to have several big time power ballad-type songs, I would imagine the choice of tracks may have been a difficult one, but "Never Say Goodbye" was definitely a solid choice, and it is executed extremely well here.

I messaged Rex Carroll a while ago about the inclusion of "Spanish Castle Magic" on this EP, as I felt it was an interesting choice, and he told me, "Spanish Castle, I actually recorded a couple years ago with my own vocal on it.  The guys liked it, so we added Jamie's voice and Dave's bass, but we had run out of time for Mike, so we used the drum track that was already there".  I have to say that I really enjoyed Rex's guitar work here, and it showcases his ability to play in styles other than the 80s "hair metal guitar god" style he is most often linked to.  If you've never heard his other project, King James, or his blues material, you should do yourself a favor and track both down if you are a fan of a guy that can simply melt an axe, regardless of the style and approach.  Here, he does a great job of delivering on the bluesy hard rock stylings of Hendrix, while also re-imagining and updating the solo stretches so that they don't simply come off as re-recordings of the original.  Rowe handles the vocals extremely well, also, and I have to say that "Spanish Castle Magic" is actually my favorite track on this mini-album,despite the fact that a couple of the re-recorded tracks are among my favorites by either band.

The last track here is simply a Spanish rendering of "Never Say Goodbye", which is something that Guardian was known for doing in their heyday.  Musically, I believe it is the exact same track, with Jamie laying down a separate, Spanish vocal here, and getting a backing assist from a woman named Suzanna Allen, whom I know nothing about other than the fact that she has a nice voice.  Its an alright touch, but I skip it and head back to the beginning of the album when it comes up, and I honestly would have rather had another cover...or an all new collaborative track...than this Spanish re-recording.

The production is simple and raw, lacking any big-time studio polish, which I have to say I really enjoyed.  It gives the songs a more live, organic feel, and goes back to what I said at the outset; this feels like an album of friends playing together and having fun, nothing more, nothing less.

I am not 100% sure, but I believe this album was ONLY available if you were a PledgeMusic backer (which I was), but I have heard the guys plan to try to play at least a couple of live shows, so perhaps there will be copies available at any live shows.  I also believe that it can be ordered digitally for download.  If you find a copy on eBay or Discogs.com or somewhere, and you are a fan of either band...or 80s/early 90s Christian hard rock...you would be doing yourself a favor to snag this fun little album.

Rating:  I always struggle rating covers albums or re-recordings, but I would say this could be cranked to a 7, with the length, lack of big backing vocals, and one wasted track being the only issues I can really think of.  Enjoy!