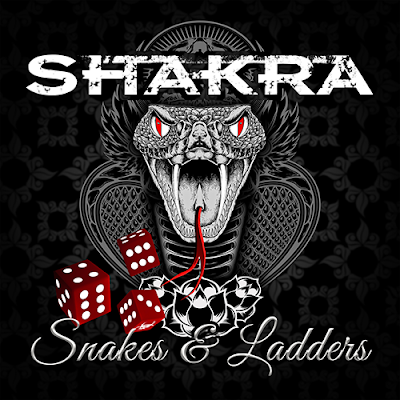 Believe it or not, Snakes & Ladders marks the eleventh(!) album in this Swiss band's history, and yet they still have not received anywhere near the accolades that I feel they deserve.  While always putting out solid, entertaining albums, the band has never had that big, breakthrough record that would grab a listener by the ears and shake them about, screaming at them "have you been listening to us?!"  Snakes & Ladders changes that, as I feel this is the definitive release by this high quality act!

Mark Fox rejoins the group as the lead vocalist, and all at once, things seem to be falling into place on this record.  When Fox first joined the band, clear back with 2003's Rising album, I felt he was the missing component, the truly dominating vocalist, the band had been missing.  While I enjoyed original vocalist, Pete Weidmer, I just felt the raspiness and power in Fox's vocals better served the music the band was releasing.  To be honest, I kind of dismissed the band after Fox left, and the  album with John Prakesh on vocals really didn't grab my attention; it just didn't seem to have the fire and passion in the vocals that I was looking for, although there were a handful of very good songs.  Then Fox returned and the vocals were back to where they were when I fell in love with the band, but High Noon, which charted very well in Europe, just just didn't have the songs that this one does.  That is not the case here, which is evident right from the start.

Immediately, many people are going to draw comparisons between the sound of Shakra and that of Pretty Maids, which, to be fair, is a pretty honorable comparison to make, as I feel Pretty Maids is one of the truly underrated bands of the past 20-30 years.  I LOVE Pretty Maids.  And yes, there is a definite comparison between the two bands, especially now that Fox is fronting Shakra again.  That being said, Shakra doesn't venture into the more metallic areas that the Maids will sometimes explore, sticking more closely to the late 80s/early 90s hard rock sound of driving, powerful rhythm guitar riffs, some excellent solo work, big drums, catchy hooks, and sing along choruses.  These elements show up in spades on Snakes & Ladders, starting with the very first track and lead single, "Cassandra's Curse", a straight forward hard rocker with riffs that will punch you in the nose and a simple, echoing chorus that will stick with you for days.

The guitar work on this record is top notch, with one of the true standout moments being the solo on "Medicine Man", which is one of my favorite overall tracks, as well.  A hard rocking number, with some nice tempo breaks and rhythm variances, "Medicine Man" is everything that is right and good about this record, and the interplay between Muster's rhythm work and Blunier's solos is superb.  The same can be said of the trade-off in "I Will Rise Again", the fastest track on the record that will likely have people also drawing comparison's to early 90s Bonfire, which is another fair comparison and a truly great honor, as I have long loved that German band.  "Fire In My Veins" is another high-octane rocker with some German-styled harmonics in the tone of the guitars and a snappy, galloping rhythm that drives throughout the track.  There is an odd false ending in this song that had me believing it had transitioned right into the album's closer, but instead the repeated rhythm guitar pattern simply fades out over the last 45 or so seconds.  "Something You Don't Understand" heads back to that melodic Pretty Maids style, featuring a prominent, throbbing bass line from Pfister that really serves as the tracks for the rest of the song to roll upon.  I love the guitar work throughout the verse sections on "Something...", and Blunier's short-but-inspired solo is a perfect mix of the more bombastic approach of the guitar gods of 25 years ago and the more modest approach used by the axe-slingers of the current generation of melodic rockers, combining a short burst of fret-burning speed but also working to be a part of the song, rather than be the focal point of the song.  "The Seeds" has a bouncy drum rhythm and a stripped down sound on the verses that really sets itself apart from the rest of the record, yet it still works very well in the overall feel of the record and is one of the catchiest tracks on the album, possibly because of the tempo change coming out of the second chorus and the big guitar solo from Blunier that then transitions the track back into the quirky cadence of the main portion of the song.

As far as slower numbers are concerned, "Open Water" is a big, emotive ballad that has a powerful, sweeping guitar solo that while perhaps a bit too short, would have filled an arena with the flames of a thousand Zippos in 90s concert venue!  "The End Of Days" teases at being a slower song, especially with its acoustic intro, but it actually turns into a throbbing, blues-tinged rocker with pulsating downbeats and a sing-along Bonfire-styled chorus that closes the album out in fine fashion.  A great, catchy, memorable track to bring to an end an album that I would not have guessed would grab hold of my quite like it did.

If I were forced to make one criticism of Snakes & Ladders, I would have to say that perhaps (perhaps) the album stays a bit too close to the same tempo for the majority of the record.  There are only a couple of what I would call "fast" tracks here, with "I Will Rise Again" and "Fire In My Veins" falling into that category, and with the exception of one song, there are real slow moments, either.  Now, that doesn't mean that every song is of the exact same rhythm and pace (see "The Seeds" above...), but there isn't a ton of variance throughout the record.  That being said, this also isn't an album of mid-tempo riff rock that eventually drones you into not really noticing the songs as it blends into the background.  Not at all.  I do think one really blazing number in the middle somewhere might have helped to break things up a bit, but this is a minor issue and doesn't detract from how good this record truly is.

That this album will finish in the Top 17 of 2017 on G2G, there is little doubt.  The question is simply how high it will finish.  This is a great record from start to finish, and one that I constantly find myself spinning again and again.  What a truly great return for Fox and for Shakra.  Perhaps now the band will get the due that it is deserved!

Rating:  Extremely crankable, turn this up to 9 on the dial!

Posted by arttieTHE1manparty at 12:42 PM