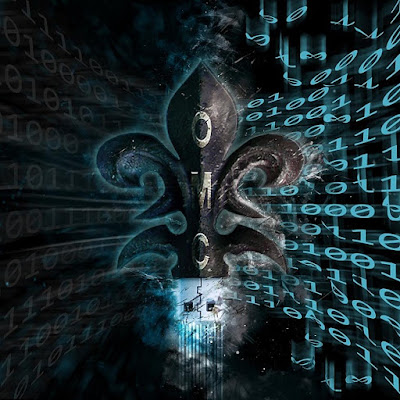 Just a quick thought...how many drummers does an album need?

Geoff Tate's post-Queensryche project, Operation: Mindcrime, completes its three-album cycle with The New Reality, an album that has been either anticipated or dreaded...possibly both...by the metal community since the iconic vocalist released the first album in the trilogy, The Key, in 2015.  For those who are joining this musical venture late, the Operation: Mindcrime (the band) trilogy is a vast conceptual story about four people who invent some sort of technology that allows them to create an alternate reality that others (I'm assuming the government) want to get their hands on.  Fans of Queensryche originally flocked to this project, hoping for something akin to what that band was doing in the brilliant first half of its career, between the debut EP and Promised Land.  For Tate detractors, this trilogy was a chance for them to point and scoff...perhaps even laugh...at the man who, despite all of his talent and the stage he had been given, managed to get himself fired from the band that he co-founded and that had become a shadow of its once-great self.

I happened to be one of the people who fell somewhere between camps.  Having been a Queensryche fan since the word jump, I was excited at the prospect of Tate continuing on in the vein of Operation: Mindcrime and Promised Land, which was where Tate's project was reportedly headed.  And at first, when he was still recording under HIS version of the Queensryche name, Tate succeeded to a large degree with Frequency Unknown, but once he was legally forced to drop the 'Ryche name and his project became Operation: Mindcrime, things have not gone as swimmingly.  Overly long and bloated, convoluted, and hard to follow, the first two parts of this trilogy were mostly a disappointment, although both had some shining moments that gave me true hope.  Could Tate possibly have one more really good record in him?

With The New Reality, it seems that perhaps he did.  Easily the best of the three, in my opinion, The New Reality seems far more focused musically, sticking largely to what Queensryche did best on the Mindcrime, Empire, Promised Land stretch, which is crafting both big metallic rockers and progressive, musically interesting and challenging ballads, along with some interlude moments added for texture and depth.  As far as the music goes, there is a lot of Promised Land here as well as some Rage For Order and Mindcrime.

Things start off with what sounds like a theremin and some atmospheric keys before we get some spoken word lyrics from Mr. Tate, but it takes over two-and-a-half minutes of the opening track before the band kicks in and the song "A Headlong Jump" actually starts.  Once it does, however, it is very reminiscent of the music that Tate was doing with Queensryche on Promised Land, sounding not entirely unlike tracks "I Am I" or "Disconnected", as points of reference.  I have to admit that I am immediately intrigued.

The uptempo rocker, "Wake Me Up", has some really nice guitar work in it and Tate is in fine form, easily adjusting his vocal range to fit the music, and I like that this is pretty much just a straight up hard rock track, nothing overtly progressive or atmospheric about it.  That changes a bit with "It Was Always You", which reintroduces those electronic and programmed keyboard elements, weaving them in and out of the tribal drum pattern used here, which I really like.  Again, Tate comes off as vocally confident and in control here, and the layered backing vocals...which I believe are just layers of Tate supporting himself...add a nice touch of depth.  There's also some really cool saxophone work here (again, reminiscent of Promised Land), and I find myself rather excited to dig more and more into this album.

"The Fear" stays in that progressive vein, but "Under Control" returns to a harder-edged sound with angry guitars, a gritty bass, and a edgy Tate all combining nicely on another one of those 'Rhychian tracks that so perfectly melded the progressive and hard rock genres together when the united band was hitting on all cylinders.  I really like this track, as it carries some Empire qualities with it, while not sounding like a rehashing of old material.

"The New Reality" is another, laid back, more-progressive moment on the record that I find myself really liking, although, once again, it seems to take a long time for Tate to join the party.  Again, very much in the Promised Land vein, this song also has, at times, aggressive rhythm guitars, piano, saxophone, programmed elements, and some pretty cool drum work throughout, which seems to be a common theme on this record.  I don't have any indication of which drummer played on which tracks, but the drums throughout this record are excellent and fit the mood of these tracks so well.  Never overplayed, and never just the standard rock patterns used over-and-over again, there are a variety of interesting rhythms, patterns, and fills, as well as a nice selection of percussion instruments intermixed with the basic drum sounds.  So many places have Tichy written all over them to my ear, but, as I said, I have no idea who plays on which song at this point, so all I can do is guess.

"A Guitar In Church" loses me, to be honest, as it is a seemingly self-serving instrumental that does nothing to advance the overarching storyline of the trilogy, or to enhance this record at all.  I would drop it, personally, but its not like its glaringly bad or anything.  I just don't see the point, and oddly, its not overly guitar-driven, either, despite the name; there are a lot of keyboards, however.

"All For What" jumps back into the story of the album(s), and with the alert siren effects and the spoken word drop-ins from Tate, this feels very much like an Operation: Mindcrime-inspired track.  There are keys/pianos, a string section (most likely synthesized as I have not seen it credited anywhere), and Tate is in fine form here as he ranges from spoken word sections to angered screams, with some powerful, impassioned singing dabbed liberally all across the track.  This, as much as anything, has that big, epic feeling that was missing from the first two installments from the band, and once again, hearkens back to better times for Tate with Queensryche.

"The Wave" is pretty dang cool, a riffy mid-tempo rocker with a plodding drum section that pretty much demands my head start bobbing along, although the track does have some rather odd electronic elements in it (is that a theremin again?!), where a screaming guitar solo would have fit in nicely.  Is Tate making some sort of political statement here with the line "the radical left have no power, and the right, no solution", or is it all part of the storyline?  Not sure, but the line definitely jumps out at you when you hear it...at least it did for me.

"Tidal Change" is really just a minute-plus long intro to the closing track, "The Same Old Story", which is one of the real disappointments on the record.  Not because it is a poor song, because it is not, but because the record ends on something of a laid-back whimper rather than a gut-punch rocker, which I think would've served so much better.  Still, "The Same Old Story" does fall in line with the mood and style of about half the record, again dropping in electronic elements (and an organ?) to enhance the progressive nature of the track.  Again, I think Tate sounds very much in control here, never reaching the rafters with a wailing scream, but still climbing the ladder in a couple of places, while varying his pitch and delivery all throughout the track.

It's odd to me that all three of these albums were supposedly recorded in one massive session over several weeks (or perhaps months), as the writing styles are so different on the three.  This disc reigns superior over the other two, and it isn't really all that close, to be honest.  With this album, I feel like I am listening to Queensryche again, which is an awesome thing for me.  I have long stated that my favorite records from 'Ryche were Promised Land, Operation: Mindcrime, Rage For Order, and Dedicated To Chaos (I also think American Soldier is unfairly bashed...), and I think this record contains elements of all of those records, with Promised Land and Dedicated To Chaos the most obviously represented.  There are also some obvious comparisons to Dream Theater that will be made, especially Images And Words and Awake, which I feel have some of the best DT combinations of heft and progressiveness.

The production here has its issues, as it has a few spots where the mix comes off as rather muddy, with the guitars on the title track being one place where this issue really stands out in my memory.  The drums also come off as a bit flat in spots, particularly the bass drum, but this is a relatively minor issue to me.  I simply adjusted the EQ on my system and boosted the bottom end a bit.  There are also a couple of moments where the music has such varied volume levels that I found myself having to adjust the settings on my computer (my copy is digital) to properly hear everything that was going on.

It will be interesting to see what happens next for Tate, as I believe he was legally only allowed to use the Operation: Mindcrime name for this trilogy and for touring, or perhaps that was a choice he made...I'm not 100% sure.  Speaking of touring, since Tate has the exclusive rights to tour Operation: Mindcrime I and II, he is taking his band of the same name on the road for the 30th anniversary of that iconic record.  Tate still has some interesting musical ideas in him and I hope he has a platform on which to share these ideas, as the progressive rock/metal community still has a place for a talent such as his.  Where that goes, it is anyone's guess at this point.

Is this a full-scale return to the greatness of Queensryche at its peak?  No, but it is closer than Tate has come since leaving/being ousted from that band.  Overall, I found myself enjoying the record quite a bit.  If it has any glaring weaknesses, it would be the lack of a true single (although, what does that really matter these days?), and it really could have used one or two more hard-hitting rockers.  Other than that, I think this is an enjoyable record that is best digested as an entire meal and not broken down into several individual courses.

Rating:  The only album of the trilogy that I consider crankable, I give this one a 7 (compared to a 5.5 and a 6 for the previous two entries).

Return To Reviews Index
Posted by arttieTHE1manparty at 2:31 PM