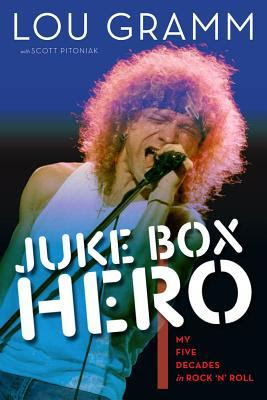 Rock legend, Lou Gramm, relates his own personal rags-to-riches story in this excellent autobiography, "Jukebox Hero: My Five Decades in Rock N Roll".  The book tells of Gramm's early musical interests (originally as a drummer), his stints with a handful of local bands, his brush with fame with his first big group, Black Sheep, and how he made himself known to the guitar player of Spooky Tooth, one Mr. Mick Jones, who was on the cusp of starting his own group.  That group, of course, was Foreigner, which was destined to become one of the biggest rock bands of the time frame from 1977 to 1987.  It's hard to argue with the success of a band who is one of only two bands to chart its first 8 singles in the Top 20, with the other band being The Beatles!

In this easy-to-read-but-hard-to-put-down memoir, Gramm talks freely about his relationships with the various members of the classic rock band, but it is, of course, his love/hate relationship with Jones that inspires the most words.  Gramm does a good job of telling about not only the strained years, which started around the Agent Provocateur album's recording and release, but also the good times, when Gramm and Jones were considered to be one of the best songwriting tandems in rock and roll!  As such, the two were inducted into the Songwriters Hall Of Fame in 2013, which is roughly where the first edition of this book ended things, I am told.  However, with this newest edition, there is an expanded Epilogue section, which finds Gramm musing about his love of cars, his third marriage and the birth of his youngest child, and his reunion with Foreigner for a 40th Anniversary Tour in 2016, which found Gramm and Jones reuniting with several members of the original band, while also sharing the stage with the current version of Foreigner.

If the reader is looking for vast heaps of dirt to sift through, he or she will likely be disappointed, as Gramm does very little name-dropping outside of members of his band...although he does have an interesting story to tell about his one encounter with John Lennon.  There are no torrid sex scenes with groupies, no piles of cocaine, and no hotel trashing going on in the book.  To be sure, Gramm admits to having addiction issues with alcohol and drugs, but there are no highly detailed episodes to speak of, although he does go into a bit of detail about the incident that led to his final admission to rehab some 22 years ago, and about how his discovery of a full faith in Jesus Christ turned his life around.  Gramm talks about his regrets to having not been there for his earliest children, his two failed marriages, and some bad decisions he made as he climbed the ladder of rock n roll success.

There is, of course, some discussion of his two solo albums, of which he is obviously proud, his evident frustration with the one-and-done "supergroup" Shadow King, and his forays into Christian rock with his Lou Gramm Band, but the majority of the book focuses on how he and Jones wrote some of the biggest rock songs of a decade and how the relationship between the two went from one of being partners to one in which Gramm felt he was reduced to merely being the man who sang the words Jones wrote.  There is a good dose of bitterness found in the book, but an even greater dose of humility, regret, and a desire to forgive, even if those things are not always encountered at the same time or to any degree of success.

Foreigner has long been one of my personal "Top 5" bands, and "Jukebox Hero: My Five Decades In Rock N Roll" was a great read from start to finish.  So many songs of my youth were touched upon in the book, with none garnering greater attention than the one the book shares its title with, "Jukebox Hero", which Gramm explains is an autobiographical tale involving a young Lou Grammatico (his given name) standing ticketless outside a Jimi Hendrix concert, dreaming of being the one on the stage at some later point.

I have not read the original printing of the book, but would highly recommend snagging this newest, expanded edition.  The stories kept the pages turning non-stop for me, and I found myself finishing the book in less than 8 hours of reading time.  There are a couple of editing errors, but nothing overly noticeable, and certainly nothing that makes the book difficult to understand or read.  Fans of Foreigner or Gramm will likely not find themselves disappointed with this book, and I would anticipate most will find themselves ripping through the book, much as I did.

Back To Sleazy Readers
Back To Home Page
Posted by arttieTHE1manparty at 5:15 PM