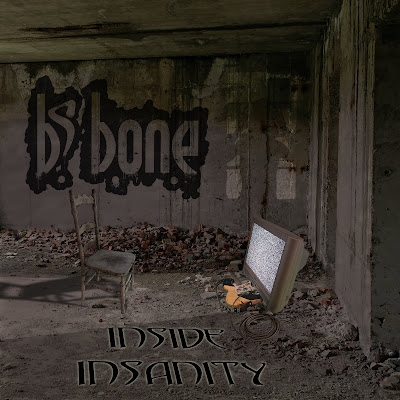 Doing this review blog affords me the opportunity to hear the music of a lot of bands from a lot of places around the world.  Sometimes music shows up in my mailbox, sometimes in my inbox, from bands that I have never heard of before.  Such was the case with BS Bone, a self-described "alternative/stoner rock band" from Italy.  No clue how they heard of Glitter2Gutter, but they sent me this 4 track demo EP and asked me if I would be interested in reviewing it.  So, sure...why not.

For starters, I wouldn't use the same description for the band that they chose for themselves.  To my ear, BS Bone is far more a garage punk band than anything, and they are definitely NOT what most would refer to as a stoner band.  Now, I wouldn't doubt the guys were stoned when they put this together, but the label "stoner rock" just doesn't apply here, at least in my opinion.  I would agree that there is an alternative sound to the band, as lead vocalist, Vyper, sounds like a really angry version of Billy Corgan, the lead vocalist for Smashing Pumpkins.  Imagine if Corgan was just very, very angry and decided to shout the words to all of the band's songs in that nasally tone he is so well known for.  Got that in your head?  Extremely angry, shouting Corgan?  Yeah, that's what Vyper sounds like ALL THE TIME.  Not once on the demo does the guy do anything even remotely close to singing.  And sadly, that might be a good thing.

The EP kicks off with "99 Lions In A Cage", which, to be fair, is a pretty cool title.  It has that 90's alternative rock kind of vibe to it.  The song title, that is; not the song.  No, the song is...well, it's bad.  I fear I must have upset Vyper in some way, because the guy spends the entire song...and really the whole EP...yelling at me for no apparent reason!  And I have just about no clue what the guy is saying!  The opening rhythm guitar riff is kind of cool, somewhat reminiscent of Motley Crue's "Live Wire" intro, and Vyper has a cool little bass run at the outset, and the drums are pretty tight, as well, but things just fall apart once the vocals start up.  Billy Cor...err...Vyper starts yelling at me and I slide about two feet back from my computer in self-defense.  After the first verse, the band slips into a 70s-styled rock interlude for a moment, complete with an odd tempo change, and then the chorus starts up out of nowhere!  Then, after the chorus, the song basically starts all over again with that same opening rhythm riff and drum pattern...and then I'm being yelled at again!  Someone, please, tell me what I've done to this guy!  Mercifully, the song ends about 10 seconds short of the FIVE MINUTE MARK, because I may have thrown my computer away if I had to endure much more of that song.

"Dysfunctional Souls" is up next and, well...at least it's only three minutes long!  There's a positive!  Again, the opening rhythm guitar riff is pretty good, even if the quality of the recording isn't top notch, and the drums and bass are again pretty good, honestly.  In fact, I think Leo has some decent talent on the skins.  But then Vyper jumps on the microphone again, and the wheels fall off again.  This time around, Vyper uses a bit lower range on the first part of the verses, but the other guys jump in and all three of them start yelling at me during the chorus, and I kind of feel like crying!  There's a pretty good bass solo after the first chorus section...or maybe it's the second one...I don't know, I'm just trying to survive here.

"I Don't Give A F**k" could be the theme song for the band and this recording, as it kind of sounds like that was what the band was feeling at the time of the recording.  This is pure punk attitude here, complete with a chorus that is so repetitive it basically seems like the band was just looking to see how many times they could drop the F*bomb into a single song.  After the chorus runs for roughly 8 F's, the song decomposes into just an absolutely bizarre, I guess you'd have to call it a break down, that runs for about thirty seconds, most of it spent with Leo smashing his cymbals while the rhythm guitars chug chug here and there.  Then a guitar solo...which is a pretty big stretch of that term...hits before the chorus F's its way out of the song.  The best thing about this song is the 1:30 that is basically the band seeing what kind of absurd noises their instruments will make in that breakdown section, with Leo seeing if he can kill everything in the room with his cymbals. (Unfortunately, he couldn't...)

The last track on the EP, "Rant", uses a guitar effect that reminds me a lot of Rage Against The Machine, which automatically turns me off, as I simply can't stand RATM.  I mean at all.  Loathe that band and will immediately change the radio station anytime they come on.  So, the chances of me liking this song was pretty slim right from the get go.  Mix in the fact that the song is just terrible and, well, hearing it twice was as much of a burden as I cared to endure.  The guitars sound like they were recorded on a boom box, the vocals are way out front and just annoyingly grating, and I can't understand more than 30% of what Vyper is screaming at me.  The drums are decent, I have to admit, and Vyper seems to have some talent on the bass, but that's about all I can manage to say about this track that is even remotely positive.

Seriously, I hate putting out reviews that are so overwhelmingly negative, because I know full well that these guys have fans that love them, and I don't doubt that they poured their heart and soul into these four tracks.  And I also don't doubt that with some help from a real producer, using a real studio, with some kind of recording budget, BS Bone might sound fairly decent.  But that's a lot of if's.  As it stands, I couldn't in good conscience ever suggest anyone seek out this demo, let alone pay good money for it.  And why risk Corona Virus being mailed to you from Italy just to hear four songs that could have just as easily been played by the teenagers at the end of your block on used, out-of-tune equipment?

Rating:  Turn this off.  I'll give BS Bone a 3 for the effort, which is really just me giving each guy an individual 1.  But that seems unfair, so I'll give Leo's drums a 6, Vyper's bass a 5, Grind's guitars a 4, then subtract 5 for Vyper's vocals, 6 for being constantly yelled at, and 1 more for the muffled tones of the guitars.  Which, if you do the math, gets you back to my original 3.  Now...where's that delete button...

Back To Reviews Index
Posted by arttieTHE1manparty at 7:03 PM