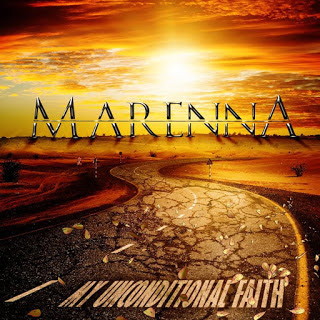 Not often, but every now and then an independent release crosses my desk that absolutely blows me away.  Now, a lot of indie bands have great songs, but the production is off.  A few releases have excellent production, but the musicianship is obviously still developing.  Sometimes the talent is there musically, but the songwriting is definitely a work in progress.  But occasionally, everything is there.  Marenna is one of those rare instances where the vocals, the instrumentation, the songs, the production...everything is there!

I honestly have no idea how this EP found its way to my hands, but I am so very glad it did, because Marenna is a melodic rock band that truly deserves to be heard and to gain a much larger audience.  Lead singer and band founder, Rodrigo Marenna, has a rich, powerful tenor that is truly a treat to hear!  The press kit I received states that Marenna, the man, has performed over 800 shows throughout his career, performing with various bands before he decided to put together his own project and pursue the type of music he truly loves.  In my opinion, that amount of work shows itself in a strong way on My Unconditional Faith, as the performances, the songs, and the vocals are all here in excellent fashion.

The catchy, up-tempo rocker, "You Need To Believe" starts things off in a big way.  Reportedly a fairly big song in Japan for a time, "You Need To Believe" is sonic candy, so catchy, so smooth, and so perfectly executed, it just sticks with me for hours after listening to it.  Fans of Journey, H.E.A.T., even Bon Jovi, are going to find something to love on this track (and the others, as well), as the melodic hard rock here is of a very high caliber.  The rhythm guitars here are solid, and the solo from Sasha Z. (Zavistanovicz if you need to know) is absolutely excellent, displaying flashes of speed and a fluid style reminiscent of so many great 80s players.  Check out the video below:

"Like An Angel" is every bit as attention-grabbing as its predecessor, with a catchy, sing-along chorus, a big guitar hook, and a soaring solo, this time from Geraldo Alta.  The backing vocals are expertly done, layered perfectly, which is something that is frequently overlooked on an independent effort such as this.  Once again, Marenna's voice is spot-on, staying mostly in his lower tenor range, especially on the verse sections, while allowing it to climb the scale a bit on the chorus sections, but never overextending to the point where his voice warbles or slips into falsetto.  Make no mistake, this guy can flat out sing!

The last "new" track here is "Keep On Dreaming", the longest track on the EP.  Starting with a nifty little guitar sequence and a big gang-shouted "Hey", this track is another fine example of modern melodic hard rock with some definite 80s/90s influence.  The rhythm guitars have some nice edge to them, and the rhythm section, which I have neglected thus far, is extremely tight.  I like the mix of percussion that Mello employs here, not just sticking to the snare and kick drum, but mixing in a lot of cymbals, high hat, and what sounds like some tambourine as well.  Cesar Branco is the axe-slinger of choice on this one, and while his solo is a bit shorter than the others, he does a lot of lead work throughout the track and has a really catchy run underneath the exiting chorus sections.  Once again, excellent melodic hard rock that will definitely encourage the listener to hit repeat on more than one occasion.

The EP closes with an acoustic rendering of "You Need To Believe", which is not just a stripped-down version of the track, but a nicely restructured rendering of the lead single.  The percussion used here is interesting, and the bass is particularly strong here.  The guitars are clean and free of fretboard squeaks and squeals, and the solo, while much simpler (obviously), is played expertly and serves as a complement to the song, not a "look at me" moment.  The backing vocals are also nicely put together, which isn't often the case on acoustic tracks, especially if the players aren't overly gifted vocalists.  However, it is the smooth, powerful vocals of Marenna, himself, that are on display here, as he expertly glides across the acoustic foundation of the track on the verses, and weaves in and out of the rhythm on the chorus parts.  It is fair to say that this is one occasion where the acoustic version of a track feels like a worthy addition to an album, rather than just a tack-on track at the end.

The production is top notch and the mix is surprisingly clean, again belying the fact that this is an independent release.  Marenna had signed themselves to Lion's Pride Music not too long after this EP was released, and that label is known for their excellent production on their releases.  But this is a self-produced effort, through and through, and I really can't see how they can improve on this effort except with more songs!

Truly a great debut, you would do yourself well to track this little treat down!  I believe it has been reissued with extra tracks, so I may have to chase it down again, myself!

Rating:  A very crankable debut effort!  Give this an 8, with only the album's brevity keeping from 9 territory.  It is really that good!

Back To Reviews Index
Posted by arttieTHE1manparty at 2:08 PM