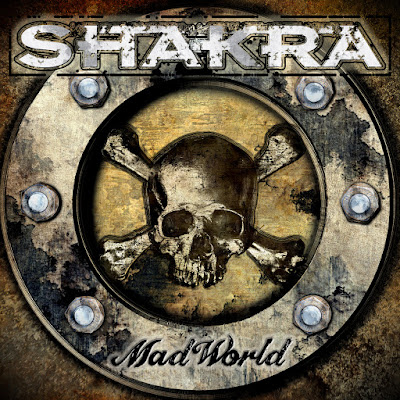 As hard as it is for me to believe, 2020 marks the 25th anniversary of Shakra as a band.  And, yes, I realize other bands have been around longer.  And that's my point, actually.  I was relatively late coming to Shakra and had zero clue the band had been around that long!  I mean, a quarter of a century has passed for a band I really like and I have only heard three albums?  What the...???

Shakra returns with their first new album since 2017's Snakes & Ladders, which was a really solid, enjoyable album that made the Top 20 albums of that year for G2G.  That says a lot considering the literally hundreds of albums that cross my desk/hit my inbox every year.  For these Swiss rockers, Mad World marks their 12th studio album and is another fine example of what the band has seemingly been doing since Pearl Jam and Nirvana were picking off melodic rock bands like ducks on a pond; they keep putting out solid record after solid record of uncompromising, straight ahead hard rock.  Immediate comparisons to German heavyweights such as Bonfire or Danish rockers Pretty Maids are going to be made, and they are fair comparisons, indeed.  All play a similar style of harder-edged guitar rock with mid-to-lower register vocals, catchy hooks, and solid rhythm sections.  I think comparisons to 80s/90s U.D.O. are fair, as well.  Not bad company to keep, eh?

The album gets right to the point with the opener, "Fireline", with it's twin guitar lead-in and straight forward drums.  Fox comes snarling in on this hard rocker, and almost instantly I feel right at home with the song, as it has a very welcoming, very familiar feel to it.  You know it's Shakra, I guess you could say.  Big backing vocals complement the chorus section, and a really cool trade-off guitar solo between Muster and Blunier accentuates the track all the more.  This is exactly the kind of edgy hard rock that I have come to expect from Shakra, and I was really happy to hear the band picking up right where Snakes... left off.

Up next is "Too Much Is Not Enough" and a dirtier, darker vibe is added to the rhythm guitars, which is instantly noticeable.  For all the world I would swear I have heard this song before, although I know I haven't.  There is just something about this chorus that is so, so familiar.  An ode to excess, "Too Much Is Not Enough" is pretty much standard fare for Shakra, again featuring layered backing vocals in the chorus section and a ripping guitar solo.  The drums from Tanner feel a bit more out front and aggressive in the mix, which adds a bit more to that darker sound I mentioned earlier, and Fox stays down in his register, especially in the chorus, again adding an element of darker rock.  I really have to say I like the guitar tones here, especially on the rhythm playing.  Check the video below.


"A Roll Of The Dice" keeps that lower-tuned guitar sound, that darker edge that I mentioned on the last track, and I have to say it really adds something to several of the tracks here.  The band sounds more...dangerous, I guess you could say.  This song could be a Scorpions track, the vibe and the writing style are of that sort, and it wouldn't have surprised me if someone had told me this was a left-over Savage Amusement track.  Just listening to the vocal phrasing on the solo totally gives me that impression.  The guitar solo is not of the Scorps' style, and no one would ever confuse Fox for Klaus Meine, but the overall feel is there.  Once again, Tanner's drums are given a pretty solid voice on this song, and he incorporates a bit of a tribal pattern in places.  A really cool song.

"Mad World" has a bit of a modern feel to the tone of the guitars, but once again this is a straight-forward hard rocker.  Probably a small step back from the first three songs in terms of lyrical quality and memorability, but it's not bad.  Fox again sticks to the lower end of his range for the most part and sounds strong, and the playing, overall, is solid, there just isn't that big, memorable hook here.  The best thing here would have to be the guitar solo, which is one of the better ones on the album, actually, but even that can't save this track from mediocre land.

Things are quickly righted on "When He Comes Around", a dirty, bluesy rocker that I really like.  Straight out of the 80s/90s with the guitar tone and the writing style, this track is definitely one of the best on the album, and this song regularly gets the repeat treatment.  I love the verse sections, where the drums do most of the heavy lifting to support Fox, with the guitars drifting to the background a bit, but you always know they are there, working through a bluesy, swaggering build before hitting hard on the chorus sections.  Once again, a really nice guitar solo complements the track, and Fox's vocal approach is perfect for this type of song.  Really, just the whole package on this track, and this is exactly where I like to find a band like Shakra working.  "When He Comes Around" definitely plays to the band's strengths in a big way.

"Thousand Kings" hits hard, with aggressive rhythm riffing, a thundering drum presence, and a big, building guitar solo that really shows off the skills of Blunier and Muster.  Fox is aggressive sounding, as well, and the track is an angry-sounding rocker that slots in nicely between "When He Comes Around" and one of the other real treats here, "I Still Rock".  Perhaps a retort to people who question what a band like Shakra is doing sticking things out for a quarter century, "I Still Rock" has a catchy, dirty vibe...almost a bump and grind rhythm, really...that bounces along as Fox sneers, "I still rock" to all who would listen.  Nope, not overly deep lyrically, and the chorus is pretty much just the title over and over, but the feel of the song is just so dang cool.  I especially like the line the rhythm guitars keep repeating, which requires some particularly nimble finger work.

"Fake News" finds the band back in that angrier, edgier style they have used a couple of times already, incorporating a bit of a modern take to the guitar tones.  Ripped from the headlines (fake headlines?), the title pretty much serves as the chorus here, which is one complaint I guess I might make about the album.  In general, although not everywhere, the chorus sections are overly simple, with a lot of repetitive phrasing.  I'm not expecting epic poetry here, but when your chorus is "Is it fake news (fake news)/Or is it great news (fake news)/Is it fake news (fake news)/Just gimme the news!", I feel maybe a bit more time could have been spent with the lyrical pen.  Anyway...

"When It All Falls Down" is another of the best tracks here, with some really cool guitar licks starting things off, and once again that 80s/90s hard rock vibe really comes through strong, a la Bonfire.  The chorus is stronger here, with a definite sing-along quality, but for my money, this song is all about the guitars, which are given a lot of attention throughout.  Its always impressive to me to hear bands whose guitar players pay this much attention to a style and sound that isn't overly popular or excessively practiced today.  Blunier and Muster are definitely students of this style and they have mastered their craft.  Good, good stuff here!

"Turn The Light On" has a classic guitar rock hook, and the song's structure is fairly reminiscent of later 70s/early 80s song structures, at least for the first bit of the song.  It becomes more commercial sounding as it progresses, and we again run face-first into a fairly repetitive chorus, but the guitars swoop in and save things with the solo section.  No such heroics are needed on "Son Of Fire", which is another great, hard driving rocker with some slightly modernized guitar tones and an aggressive rhythm section with a lot of punch.  This is another track I find myself repeating fairly regularly.

The album closes with the only ballad on the record, and it's a pretty good one.  "New Tomorrow" is pretty stark for the first verse, with no drums present at all, just Fox's voice and the guitars.  The second verse brings the rest of the band in, and we have another song that I think the Scorpions could have written, with a similar approach to "Send Me An Angel".  This isn't really that big lighter in the air power ballad, as there isn't that huge, soaring guitar solo in the middle that brings everyone to their knees (the guitar run is the closer here), but it's a nice, softer moment that shows Shakra isn't completely a one-trick pony.

Maybe not quite as catchy in the songwriting department as Snakes & Ladders, but on the whole, Mad World is definitely not far off.  This is a really, really strong record with a number of catchy rockers.  If only a bit more time was given to the chorus sections on a few tracks, this may be the pinnacle of the band's catalog.  The production is spot-on and the mix is really good, especially in allowing the twin guitars to do their work and in giving the drums a really strong presence.  Due out on February 28, Mad World is an album well worth seeking out and picking up!

Rating:  Another solid entry from a band that really never disappoints.  Crank this to an 8!