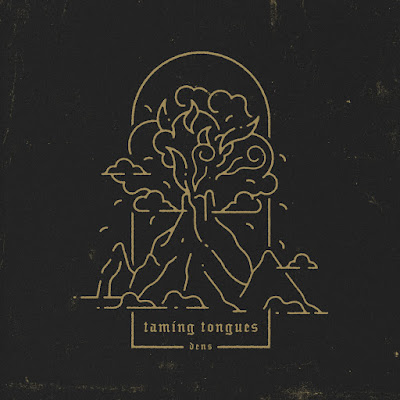 I am not necessarily a fan of labels, especially when it comes to trying to figure out how to represent a band's sound.  Dens is a band that gives me fits, label-wise.  Are they metal?  Well, no, not entirely.  Post-hardcore?  Grunge?  Not completely and no, not really.  Alternative?  Indie rock?  Sorta.  Maybe.  Nothing completely defines who Dens is, musically.  But maybe that's okay, because Dens isn't about being labelled.  They are about making heavy music that makes you think.  (And before you ask, no, they aren't math metal, either!)  With ambient sections, metal sections, hardcore sections, screaming vocals, barked vocals, dang near spoken word vocals, and deep, heavy grooves, Dens is one of those bands that really should appeal across hard/heavy music genres, yet when I talk to my friends about them, nobody has heard of them.  That, my friends, needs to change.

Immediately, most people are going to notice the message spelled out with the song titles, and as you may have guessed, that was not unintentional.  "Even Foolish Men Are Wise When They Learn To Keep Quiet" is an altered version of Proverbs 17:28, which reads, "Even fools are thought wise if they keep silent, and discerning if they hold their tongues" (NIV), which is rather interesting to me as in this day and age, NO ONE seems to hold their tongues about anything, thanks largely to social media.  It's cool that the band is able to do this with the digital and CD packaging as it is, because in the cassette and vinyl days, the message would have been split up into sides A and B, causing a disruption in the flow of the message.  Also, it should be noted that rarely do the song titles actually have anything to do with the song itself, so hopefully no one is expecting "Foolish", for example, to have a chorus of the word foolish just being chanted over and over endlessly.

The album comes to life with a discordant squeal of a guitar, with a heavy wall of guitars, bass, and drums building in the distance and roaring forward.  The surprisingly clean singing voice of Hypes glides over the top of the fray, and I have to admit to waiting for the harsh screams or snarls to hit, but they never come.  After the second chorus, the guitars take on a droning quality for a moment wit some heavy drum work underneath, and while a solo never breaks out, the song doesn't venture into a breakdown, either.  One more run through the chorus and "Even" wraps things up, leaving me a bit overwhelmed despite the fact that I have heard this song dozens of times, as the song has been released as a single and is steadily climbing the Christian Rock charts.

My favorite track here has to be "Foolish", and for people thinking this type of music needs harsher vocals, then this is the track for you.  No, Hypes doesn't shred his vocal chords for the sake of the song.  Instead, the band calls upon LeRoy Hamp from War Of Ages to add his hardcore barks to this track, creating a stark separation from the smooth, clean vocals of Hypes.  This song is pretty much pure aggression, with big drums and jagged guitars ripping their way through the enormous sound wave that blasts through the speakers.  No doubt about it, this is heavy, heavy stuff, and someone needs to explain to me why metal/heavy rock radio isn't eating this song...and band...up.  I mean, at just two songs in, I find myself pretty much sold on Dens.  Anyway, check out another Dens video, this time the cool, "art house" video for "Foolish".


"Men" is up next and after a brief intro, the band hits full force, like a throat punch, but to your ears.  Again, Hypes' vocals seem almost out of place when juxtaposed with the heavy music, but it works so incredibly well.  You can feel the emotion dripping from Hypes' words, and the wall of guitars is an impressive thing to behold, as well.  I really wish I had the lyrics to this album, as I really want to know what Hypes is singing on the chorus, but it is hard to pick up sometimes because of the previously mentioned guitar wall.  The drums are big here, also, and Tomlinson weaves a bass line through the track that fills in the rare nooks that the guitars don't smother.  Good, good stuff.

The album really takes an interesting swerve with "Are".  The song opens with a much softer feel than the previous tracks, with Hypes singing in almost a whisper at first as he drifts through the ambient layers of stretched guitar chords.  At about the 1:50 mark, the gorgeous vocals of Laura McElroy enter the track, taking a turn at a verse by herself before joining Hypes in a duo fashion for a stretch.  It's nearly three full minutes before the percussion joins the song, and Hypes cranks up the power of his voice at the same time, and a heaviness envelops the track without picking up the pace of the song until near the end.  It is hear that Osborne's drums take on a heavier, almost tribal rhythm, picking up the pace gradually as the track bleeds directly into the next one, "Wise".  This new song relies heavily on drums and percussion and has a really cool vibe to it as Osborne pretty much takes over.  Sure, the guitars are still a major presence here, but for me, the power of the drums, the cool fills and the huge cymbal crashes are just impressive.  This is a song that, if played in concert, would likely leave me standing there, almost numb from all that is going on, especially if "Are" was included as the prelude, because together they reach almost 9 minutes of intense musical beauty.  I don't think it a stretch to consider a song/song combo like this to be progressive, as the styles incorporated here are definitely not singular in nature.

"When" gives the bass a bit of a chance to shine as it accompanies the drums in setting the foundation of the song, allowing the guitars to flow across the top.  Hypes is again a strong vocal force here, but once again, it is the somewhat unusual drum patterns that really grab my attention on "When".  In contrast, the guitars are the first thing to grab me on "They", a track that I would imagine will find itself being released as a single at some point, as it shares a bit of the same stylistic approach and a similar accessibility to "Even", the current rock radio single.

"Learn" features a rather unusual vocal approach from Hypes, as he uses basically a spoken-word approach, or rather a shouted-word approach, on the verses.  I'm trying to think of who it reminds me of, as it is right on the tip of my brain, but I can't quite grab it.  It adds a different type of intensity to the track, and I visualize him standing up on a box, barking to the crowd through a megaphone in the live setting.  The chorus sections are sung, which gives an even greater power to the gruffer verse vocals, while the layered guitars churn away beneath the whole episode.

"To" has some jangly bass and rather angry, discordant guitars bouncing atop a tribal drum pattern to start things off, and the first thing I can think of is an angry Primus song.  But then Hypes takes on an equally angry/aggressive vocal style, turning to barks and shouts instead of the smoother singing style he had used throughout the first several tracks.  Everything is kind of a noisy, jumbled, heavy mess that runs for just two short minutes, but really sets the stage for "Keep" which has a melodic, emotive build at the beginning that stands in stark contrast to "To".  Hypes returns to his clean singing, and the guitars take on an atmospheric quality with the effects employed on the bluesy style of playing.  Good stuff, to be sure, and solid proof of the amazing skill of this band.  I hope this song and the next one, "Quiet", are both incorporated into the live set, as both prove Dens is so much more than just a blazing wall of heavy guitars and thundering drums!

The production here is outstanding, which was honestly necessary.  With the sonic build of a band such as Dens, if great attention isn't given to each element and instrument, there is a huge risk of everything becoming muddy and muddled together.  Fortunately, that is not an issue here, as it is relatively easy to pick out a single guitar, for example, and follow its line throughout a particular song, with the intentional "messiness" of "To" being the chosen exception.  As I stated above, I don't have a physical copy of the CD, so I don't have access to lyrics or liner notes, so I can't comment on packaging here, but generally speaking, Facedown does a good job in this area.

I don't really know who to compare the band to if you have never heard them, because as I pointed out, Dens is really hard to pin down.  There are elements of Attalus in the sound, but the odds are most readers won't know who that is, so that's not a lot of help.  Just know going in that this is lot of record to take in all at once, as there are so many moving parts.  Lyrically deep and musically intense, Dens should be a force to be reckoned with in the heavy music scene if they are given the chance to impact the market.

Rating:  Crank this full-length debut from Dens to a 7.5!

Back To Reviews Index
Posted by arttieTHE1manparty at 1:09 PM