JENNA PARR "Made For This" 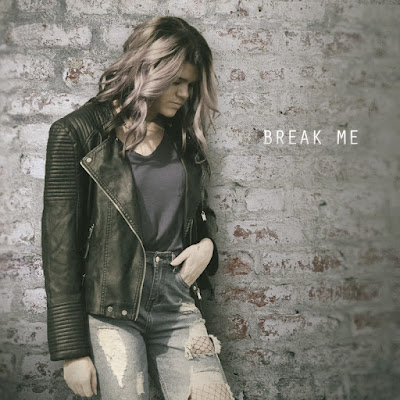 Jenna Parr is a relative newcomer to the Christian pop/rock scene, so I will forgive you if you don't know her name yet.  However, with the explosion of her current single, the Number One ChristianRock.Net hit "Break Me", that forgiveness won't be out there for long, as the music industry will soon know exactly who she is if she continues in this vein.

Supported by Randall Broadhead of We Are Vessel, Parr's 8 song EP is kind of all over the place musically.  And while she is certainly never "bad", it is definitely the harder-edged material that is likely to garner her the most attention.  This is immediately evident with album-opener, "TKO", an edgy rocker with hard grinding, modern guitars churning their way through the track, with a very solid bass presence in this track.  The drums sound like they are programmed, and there is an electronic, programmed element that seems to flow throughout the track, but these aren't necessarily bad things here.  Those hard-edged guitars I spoke of kick the track off in a very promising way, and I really like what the songwriters were trying to do here with the variance in tempo and rhythm.  And that bass is kickin'!  I also applaud Parr's effort here, but I just don't feel she hits the verses with enough attitude.  A little snarl can be a good thing on a track such as this, especially for a young woman like Parr who is trying to find her niche.  Not a bad song, but probably a bit of a gamble as the first track the listener hears when the album starts (if my track order is correct).  I would have probably started things off with the current single, "Break Me", but it's a short wait to get to that now-huge song.

"Break Me" starts with a programmed keyboard sequence and what sound like programmed drums introing the song, before a buzzsaw guitar steadily builds and Parr's mid-range vocals kick it, with some programmed effects dropped into her vocals as she sustains the final note.  The entire "band" kicks in after this initial run, and the first verse hits, running through the same opening stanza of the song before adding a second line and a brief pre-chorus section.  It is the chorus that seems to grab the listener so strongly, and this is, in my opinion, due to a couple of things.  First, Parr has a very strong voice and knows her range well, so she is not found stretching for notes that she can't effectively hit, nor does she try to sound "edgy" (which I think would have worked on "TKO") with her singing style here, as I don't think it would have fit the almost Gothic feel that "Break Me"incorporates into its modern rock take.  She sings like she sings.  This is made all the more effective by the producer/mixer of this single, as Parr's vocals can be heard to be her own backup, singing in different registers and with different inflections, adding a unique sound to the backing vocals.  There is also a hint of an unclean male vocalist in final run through the chorus, which adds a bit of an edge to the track as well.  Lyrically, the song is extremely simple, with very few variations between the first and second verses, but it is the chorus that grabs the listener's attention and holds onto it fiercely.  That use of multiple layers of Parr backing herself, combined with the conviction with which she sings makes the chorus very infectious and hard to get out of your head.  There is a brief vocal bridge that enters into the mix before the final run through the chorus, but again, it's nothing overly complicated or attention-grabbing.  This song is all about the chorus, the hook, and the performance of Parr.  Check out the video below:

The album's title track and lead single, "Made For This", has an Evanescence quality to it, starting with a fairly haunting piano intro, which Parr joins as she sings about having a dream/nightmare, before the guitars, bass, and drums hit in a big way.  Again, very reminiscent of Evanescence, the guitars are edgy and crunchy, the drums, while sounding programmed, are solid and have enough punch to drive the track, and some additional percussion is thrown in for extra measure.  Broadhead's strong voice enters the fray on the second verse, and while he does good job on his own, for some reason his vocals do not mesh well with Parr's when they sing together.  This briefly results in Parr sounding like she comes a bit off key around the 2:05 mark.  This issue is short-lived, however, and a third voice enters the mix, as rapper Jordan Copas jumps in for a 30 second vocal run, before the male/female chorus section is repeated, with Copas dropping into a couple of spots as it exits the song.  I can see where this song would have been pretty welcomed on Christian rock radio, but there are some vocal issues I would like to see cleaned up to really emphasize the strong points here.  I like the idea of the three voices, even if I'm not necessarily the biggest rap-rock fan out there, and I do think it works well here and serves a solid purpose.  We just need to get the pitches matched up a bit better on the multi-voice choruses.

"Those Eyes" starts with a phone being dialed, only to catch a busy signal, which causes the band to hit full force with guitars, keys, drums, and bass.  A more mid-tempo rocker, this is probably my favorite track here, just ahead of "Break Me".  Parr stays in that lower end of her range, actually coming dangerously close to that snarl I mentioned was lacking in "TKO".  Again, the listener is treated to multiple layers of Parr singing both lead and backing vocals, and the guitars of Broadhead and Lane are more prominent here than on other tracks, which is a good thing, as it really adds to the overall feel of the track.  There is an urgency to the guitars here that is not really present in most of the rest of the album, minus "Break Me".  I really like this song, and I hope that this is pushed as a follow-up single to "Break Me", as I think it could do big things for Parr's rock career...if that's the path she chooses to take.

I say that because for the rest of the record, Parr seems reticent to let go of her softer side, sometimes even drifting toward the more praise and worship-styled music that she likely grew up with.  "Tremble" is a perfect example of this.  This cover song, performed originally by Mosaic MSC, among others, has some subtle programming running the length of the song, some muted electric drums and guitars, and a soaring vocal presence from Parr that finds her singing far more sweetly than on the three rockers here, and doing so in excellent fashion.  This track is very much in the vein of modern worship music that many churches employ today in an effort to reach younger demographics.  She also does a GREAT job singing on the acoustic version of "The Runaway", which is just Parr and a piano, and while I'm willing to bet the full-electric version of this really well-written song will be released to rock radio at some point, I wouldn't be at all shocked to see the acoustic version on the Christian pop charts. The same can be said of "The Breakdown", another vocals and piano track, but this time featuring a duet between Parr and Lane.  The voices work extremely well together, especially on the bridge section where they are singing in unison for much of the stretch.  Very well done, here.  And, while it is not my style of music, I have to admit the song is well-written and performed, and again, I would be this song is released to Christian pop stations at some point.

What happens to Parr from this point on is probably going to be determined largely by which direction she feels most comfortable going in, as I think she has a lot of potential in both the hard rock and the praise and worship areas.  Yeah, she might cross-over into the Christian pop realm a bit, as I mentioned, but I don't get the feeling that is where she desires to be.  If Parr really embraces the rock sound that half of this EP builds to, I think she will be welcomed with wide-open arms, as strong females in Christian rock, just like in mainstream rock, are something of a rare commodity.

As a debut effort, there is a lot to like about Made For This, but there are some things to improve upon, as well.  But if the response to "Break Me" shows anything, its that rock listeners are ready for more from Jenna Parr, and there are a couple of musical punches on this album that this young woman still has to throw (PLEASE push "Those Eyes"!!).  Let's hope they find their mark!

Rating:  Rock this at  6.5, with a good dose of promise in between a couple of lesser moments.