ROSS THE BOSS "Born Of Fire" 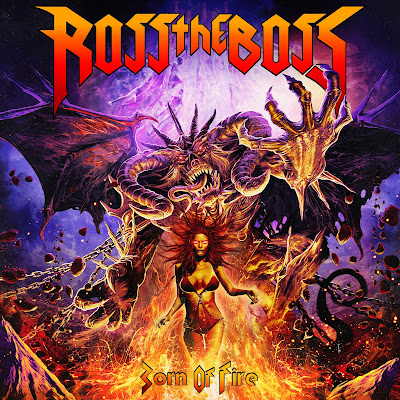 I'm just going to cut to the chase.  If you are not a fan of blisteringly fast, exceedingly loud power-thrash metal with thundering drums, blazing guitars, and more snarls and screams than a pack of rabid werewolves, just go ahead and skip Born Of Fire, the fourth studio album from long-time Manowar axeman, Ross "The Boss" Friedman and friends.  Taking a cue from the best material he ever worked on with Manowar, and marrying it to the speed and thrashiness of a band like Overkill, Ross The Boss...the man...has cut loose with probably his best work to date with Ross The Boss...the band.

I will admit to having to spin this album a few times before being able to really take it all in, because there is a lot to sonically digest here.  Most of the tracks here are so hyper-aggressive, it throws you back a bit because this is not what metal bands are doing today.  With basically only one exception, there are no big, epic moments, and nowhere will you hear huge string sections or operatic female co-lead vocals.  This is pretty much just the soundtrack of aggression...and I like it!

Things start off in exceptionally fine form with "Glory To The Slain", a scorchingly fast, thrashy track that finds the band firing as one right from the get go.  No long instrumental intros here, as Lopes comes snarling in after just a few cymbal crashes, and the rest of the band blazes after him in a high speed chase of screaming guitars and rapid-fire drums!  Lopes, formerly of thrashers Meliah Rage, sounds like the lovechild of Manowar's Eric Adams and Overkills Blitz, with the power and screams of the former and the snarling anger of the latter.  For fans who may be looking for a pure Manowar spin-off, Lopes' vocals may take some getting used to, as he isn't quite the true singer/screamer that Adams is, but to be fair, very few are.  Regardless, the record is immediately shoved into your earhole with "Glory To The Slain", as well as the follow-up thrasher, "I Am The Sword", which takes the speed of Manowar's "Demon Whip" and welds it to the Under The Influence-era Overkill in terms of aggression.  Friedman's solo skills show themselves to have not deteriorated even one iota here, as he tears through a set of strings in nearly unimaginable fashion.  Not designed to be pretty, not created with melodic intent, these two tracks combine to form a pure speedmetal meltdown that is unequaled by anything that has crossed my desk in the past several months.

"Fight The Fight" slows things down a bit, which simply means you can breathe again, but the musical punishment continues.  I am curious how many drum heads Bolognese went through in recording this album, because he beat the living snot out of his kit on every single track of this album, with "Fight..." being no exception.  "Shotgun Evolution", again just a slight bit slower, is also just a tad more melodic than most of the songs here.  The chorus features gang-shouted backing vocals on the "shotgun" part of the title, and LePond's bass is given a pretty solid voice here.  Some dischordant guitar sweeps come out of a vocal bridge section before kicking off the final run through the chorus, then the most epic power metal chords of the album take things home.  Not my favorite track of the record, but an interesting one, to be sure.

"Denied By The Cross" has definite Manowar moments, namely in the structure of the chorus and in Lopes' extremely Adams'-like screams during said chorus, but there are also pure thrash moments from the rhythm guitars and the drums that make this track a metallic beast.  I am not a fan of the anti-Christian lyrics, particularly when Lopes puts a dark spin on the opening lines of the Lord's Prayer, but musically, this is powerful stuff.

To me, "Maiden Of Shadows" could definitely be a Manowar track, as it has that big, epic feel that is so often found in that band's songs, but it is blended with something of an Irish folk feel.  To be honest, after the way the song started, I fully expected it to be Eric Adams that came screaming from the speakers.  It would shock me if this song doesn't find its way into RtB setlists, nestled between a couple of requisite Manowar tracks.  This is possibly my favorite track on the record, although there are several that vie for that claim.  In the end, the superb song structure, the chanting chorus in the background, and the huge wails from Lopes give me a Manowar feeling I haven't had for several years.

The title track dives back into the speedier material, aiming for metal and not for pomp, and Friedman's gritty riffs power the song forward.  The same can be said for follow-up, "Demon Holiday", which again has aggressive, chunky riffage from start to finish with a speedy fret-burner of a solo from Friedman and more jackhammer drumming from Bolognese.  "Godkiller" gives a lot of freedom for LePond's rumbling bass to be felt right from the start, and once again I would have to say that Friedman is his own influence here as shades of the mighty Manowar are draped all over this song.  As such, along with "Maiden...", this is another song that begs for my attention every time I put the record on to play.

"Waking The Moon" is an odd piece for the band, but it is a killer moment that has to be heard and appreciated.  Howling wolves start off the track which is straight ahead metal.  Lopes uses various vocal approaches here, ranging from snarls and screams to a nearly spoken-word approach at one point.  There's a swing to the tempo of the song, and there are a couple of truly funky bass solo drop-ins (yes, I said bass), that are so alarming the first couple of times through that most listeners will think something is wrong with their disc.  Trust me, nothing is wrong, and Friedman heads off on his own sweeping guitar solo in very short order before Lopes launches into a final chorus run.  I can't say I have heard anything this distinct in quite some time, and the tempo and time changes are borderline bizarre, to be honest, but I can't help but like this track for some reason.

As the album closes, two big songs remain.  "Undying" is a pretty traditional power metal tune with a galloping rhythm driven by both Friedman's guitars and Bolognese's drums, and Lopes gives his vocals a real stretch.  "The Blackest Heart", which is the longest song on the record, is the slowest song on this album, with a doomy, plodding tempo, a lot of bottom end riffing, and some big, string-bending solo work from Friedman, who really sounds to be enjoying the change in pace.  Tempo-wise, think of "The Thing That Should Not Be" by Metallica, with that kind of riffing, and even some similar drum patterns, but there is a haunting feeling here, partly supplied by the hiss and pop of vinyl static, that gives this track a sinister chill.  Not a song I return to time and time again, but one that grabs my attention each time it rolls around.

The production here is borderline perfect, with a lot of room for each instrument to add its voice.  I'm not sure who produced and mixed this album, but they deserve a lot of credit for the full sound here, which I am sure is difficult to achieve when so many instruments come flying at you at such a rapid pace.  Exceptional musicianship abounds here, and Lopes sounds very confident in what he is doing.  I'm curious how he handles the Manowar tracks that I am sure pop up in the setlist, because there are definitely some Adams qualities to his voice.  Don't think that means Lopes is a copycat vocalist by any stretch, for that would simply not be the case.  In the end, most people are going to come by Ross The Boss due to their affinity for his playing and writing with the Kings Of Metal, and for the most part, I think those folks will be sated.  But RtB deserves to be heard because of who they are as a band, not because of who Ross The Boss was with his former mates.  And, to a large degree, he and his current band do a good job of carving out their own identity while not turning their back on where the band's origins lie.

Rating:  Definitely crankable!  Crank Born Of Fire to 7.5 and prepare to be face-melted, especially on the blistering first half of the record!

Back To Reviews Index
Posted by arttieTHE1manparty at 4:29 PM