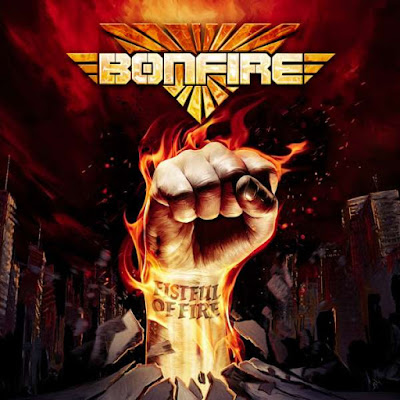 Almost EXACTLY two years ago I reviewed Bonfire's Temple Of Lies, the at-that-time latest release from one of the truly great German hard rock bands of the past 30 or so years.  Temple... was the second release from the band with their new, powerhouse lead vocalist, Alexx Stahl, who brought a power metal feel to the bombastic hard rock that Bonfire has been delivering since 1986.  Now, just two years later, the Teutonic band unleashes their latest effort, Fistful of Fire on the masses, with the only line-up change being the addition of recent touring drummer, Andre Hilgers.

As is always going to be the case with Bonfire, the band is first and foremost a vehicle for the expertly crafted hard rock anthems that lone remaining original member, Hans Ziller, spills from his pen.  But with the addition of Stahl on vocals, there is a new dynamic in Bonfire that has given the band a rebirth of sorts.  And Bonfire has seemingly taken this new beginning and run with it.

The new record kicks off with an instrumental intro, "The Joker", which would normally set me into a foul mood instantly, as it is well-known to readers here that I despise about 90% of intros.  Sure, sometimes a band has a musical lead-in that is noteworthy, or even occasionally necessary, but more often than not, the intro is just musical or theatrical bloat in my opinion.  Fortunately, "The Joker" falls into the 10% that I am good with, as there is a true musicality here that adds significantly to the follow-up track.  Utilizing a flamenco guitar, drums, and a flute of all things, a unique musical tapestry is woven in the first 25 or so seconds of "The Joker" before the switch is flipped and the electricity flows through the guitars, and new drummer, Hilgers, goes to work on a driving rhythm that carries the track straight into "Gotta Get Away".  This is a big, area rocker of a song, and Stahl sounds even more confident here than he did on his Temple Of Lies debut.  The guitars have that gritty hard rock edge that Bonfire has always delivered, and the chorus is a fist-pounding sing along that fans will likely eat up the first time through.  I know a lot of longtime fans have had a hard time absorbing Stahl's style, but here...and throughout the record...it feels like he has managed to keep his exuberance under control.  To be sure, Stahl still delivers with power and confidence, but perhaps he doesn't feel as compelled to cut loose on an ear-shattering scream, for example, just to prove that he has the pipes to do so.  "Gotta Get Away" is an excellent start to this new record.

"The Devil Made Me Do It" is one of those songs that is just pure Bonfire for me, especially on the chorus section.  The layered mid-range backing vocals that Bonfire has always used are a signature of sorts with this band, and their presence is definitely felt here.  The band utilizes some keyboards in a supporting role here, giving the song a bit of an epic feel, but for the most part this is still just a straight-forward hard rock number with an absolutely stellar guitar solo that would have many lesser players fingers tied up in knots.  Again, Stahl has come to deliver on this track, and he does unleash a couple of monster screams exiting the chorus sections, but for the majority of the chorus he almost sounds like Claus Lessman for a bit.  On the verse sections, Stahl utilizes a slightly raspier approach that serves him well, and overall, I think Alexx has really found the range that best works for
Bonfire.

"Ride The Blade" again hearkens back to classic Bonfire, sounding like it could have been written for the Fireworks sessions back in the 80s, which most fans still point to as the defining sound of the band.  For the most part, Stahl again keeps his vocals in that same Lessman-inspired range, only climbing the scales occasionally, and then only as a punctuation mark on a particularly powerful section of music.  The rhythm work here is excellent, the galloping drums from Hilgers are thunderous, and once again a strong guitar solo really delivers here.  One of my favorite tracks, to be sure.

Things slow down considerably for "When An Old Man Cries", as the band delves into ballad territory for the first time on the record.  I particularly like the march rhythm that is incorporated into the second verse section, as I feel it gives the song a unique feel, unlike a lot of ballads of this genre.  An emotive string-bender of a solo really gives this track an MTV "Headbangers Ball" feel, and I have zero doubts this song would have hit big 30 years ago.  The title really threw me when I first saw it, but the song has a strong story to it, and the song, as a whole, delivers in a big way.

The lead single hits next, and to be honest, I probably wouldn't have led with "Rock N Roll Survivors".  It's a solid rocker, but the lyrics are a bit on the cheesy side, and I don't think it's really all that representative of the album as a whole.  Again, the guitar tone is pure Bonfire, the rhythm and tempo are solid, and even the solo is a good one, but the song comes off as rather cliche lyrically, and is just not what I would have chosen.  Check out the video to see if you agree.


Now, the next two tracks scream single to me!  "Fire And Ice" is far grittier in its guitar tone and much more aggressive in its delivery, with a lot more meat to the sound.  Stahl nails this track with his vocals being utilized in various portions of his range, and he adds and subtracts a raspy approach as the song calls for.  Again, those trademark Bonfire chorus vocals are there once again, and the drum fills from Hilgers are spot on.  And if "Fire And Ice" strikes the listener as perhaps a bit too aggressive to be a single, "Warrior" should appease you nicely.  Definitely more radio rock in its structure and style (as in 80s radio rock), "Warrior" delivers very nicely in terms of its melodic approach and hooky structure.  Once again, this is classic Bonfire, circa 1988, and Stahl makes the most of his more controlled vocal approach on this track.  Pure ear candy for the harder-edged AOR crowd and pure melodic rock bliss.

"Etude" is a mini instrumental, spanning just 81 seconds, but it is the kind of fretboard running that Eddie Van Halen and Rex Carroll (Whitecross) and so many others would interject onto otherwise not-instrumental albums...just because they could!  Its a fun listen, no more, no less.

Another straight-80s rocker blisters out of "Etude" with the charging guitar drive of "Breaking Out".  I challenge the listener to really pay attention to Hilgers' drum work on this track because he pulls out all the stops here, from riding the hi-hat to crushing cymbals, to big, galloping kick drums, while seemingly constantly changing the pattern up to keep things interesting.  The guitars trade off nearly constantly, as well, and this is just a fun song to sit back and enjoy, and one that I am sure could lead to a speeding ticket or two as you tear down the highway with the top down this summer.

The title track, "Fistful of Fire" slows things down a bit, coming off as more of a punchy mid-tempo hard rocker, with gritty rhythm guitars and smooth lead runs working around a unique tempo and slightly off-kilter, gang-shouted pre-chorus section that leads into a big, sing-along chorus that while simple, is definitely catchy.  The guitar solo utilizes a darker tone than others on the record, which fits the mood and attitude of this track.  I could see this song becoming an extended jam in concert, as the guitar solo section feels like there is plenty of room for an axe-slinging showdown before the last run through the chorus.

Another musical interlude drops, this time featuring some classical piano teamed with a marching snare and some nifty twin guitar harmonizing.  Not really necessary, but "The Surge" serves as the intro to the blazing "Gloryland", one of the two fastest tracks on the record.  While I really, really like the song, this is one that I could see a lot of die-hard Bonfire fans pointing to and saying, "THAT is not MY Bonfire", because there is a decidedly power metal feel to the song's structure, even if the execution is still German hard rock.  Stahl expands his range to a good extent on this track, again utilizing that power style he handles so easily, but the chorus, to be fair, is pretty much classic Bonfire.  A nice fret-running solo section sears its way through the track, even changing tempos and slowing into a bit of a bombastic section, before picking back up and spinning us through the last verse and one more run through the chorus.  While some may not like "Gloryland", I think its a great example of where Bonfire is now, with one foot in the band's past, while striving to continue to expand and grow.  Definitely a top 3 song for me from Fistful Of Fire.

The album closes with an acoustic rendering of "When An Old Man Cries", and while it is expertly performed, I don't know that it was necessary.  The guitars are expertly played here, and it is interesting to hear Stahl utilizes a FAR different approach to the vocals than elsewhere on the record.  Again, I like it...quite a bit, to be fair...but it feels tacked on and doesn't do anything to really further the record for me.

Beautifully produced and expertly mixed, this is a very clean sounding record, but it doesn't sound sterile or spit-polished.  There is edge where it is needed; there is grit when it serves the song.  There is a definite separation between the guitars, which is a necessity with such a powerful two-guitar attack as Bonfire's, and the vocals are nicely handled and layered, particularly in the chorus sections which, again, is something of a Bonfire hallmark.

Bonfire continues on a strong career resurgence, and Fistful Of Fire may be their strongest release in more than a decade...perhaps longer!  Due out April 3rd, this album should be at or near the top of your must-get list, and it will likely end up in the running for album of the year for many!  I'm fairly certain it will find its way into the Top 20 ranks for G2G at the end of the year...but we have a LOT of time to go before then!

Back To Reviews Index
Posted by arttieTHE1manparty at 1:58 PM