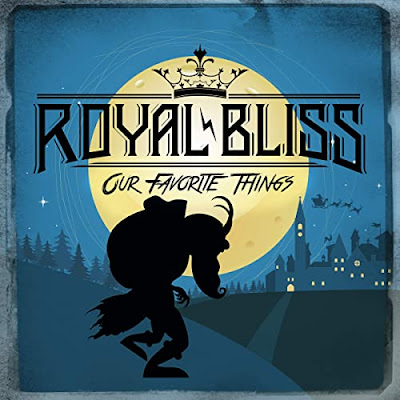 (c) 2020
Neal Middleton--Lead Vocals
Taylor Richards--Guitars
Memphis Hennesey--Guitars
Dwayne Crawford--Bass
Jake Smith--Drums
Additional Musicians
SHIM--Co-lead vocals on "Medication"
Just in time for the holidays, Royal Bliss fights through the pandemic unknown to return from quarantine with a bite-sized EP, Our Favorite Things.  Currently only available digitally, not only does Our Favorite Things find the band hitting hard with some of the heaviest material they have released in some time, but they also bring in SHIM (Shimon Moore, formerly of Sick Puppies) to collaborate on the current single, "Medication" (more on that in a minute).  Utilizing the same four-person line-up found on the self-titled release from 2019, Royal Bliss offers up this little musical gift for its fans in a time when so many are begging for new music to tide them over until a time when we can go see our favorite bands live again, a theme which the band visits on a couple of occasions on this effort.
The EP kicks off with the band covering the classic "Favorite Things".  The music is eerily haunting in the way it is performed here, and Middleton matches the mood perfectly, especially with the reverb that is added to his vocals.  Always teasing at becoming a hard rocking affair, "Favorite Things" sticks to relying on acoustic guitars and simple drums, along with some effectively placed strings and a children's choir to back things up.  There's a potent instrumental section before Middleton comes screaming back into the fray with another run through half of the chorus before he leaves the scene and allows the children to carry the song home.  There's a lot going on musically in this track and it is definitely a fun listen that I hope drifts across the airwaves of more than a few rock stations during the Christmas season.
Things get amped up in a BIG way with the band's late-summer single, "Medication", which features SHIM, formerly of Sick Puppies, on co-lead vocals.  An aggressive rocker, this is the type of hard-hitting Royal Bliss track that I fell in love with from the band several years ago on the Waiting Out The Storm and Chasing The Sun albums.  Fueled by the angst of the pandemic and the lack of live music due to lockdowns, quarantines, and social distancing across the country, "Medication" blasts the listener with heavy guitars, a punchy bass line, and thunderous drums as Middleton snarls, "Where's my medication?!"  It should be noted, however, that medication in this case doesn't refer to pharmaceuticals, but to the music that the band...and so many of us...need to keep ourselves sane.  As such, the accompanying video, which can be seen below, fits the mood and attitude of the song perfectly, as does the lead vocal assist from SHIM (Shimon Moore), formerly of Sick Puppies.  SHIM is featured on the second verse of the song, and also appears in the video in a television commercial for the medication, SHIMTAC, which will apparently help with the "Rockvirus" that has swept the country.  (Be ready with the pause button in several spots in the video to catch the different references that are sprinkled throughout the television programming that the strait-jacketed Middleton watches from his padded cell.)  Moore's vocals are distinct enough from Middleton's to add a different feel to his verse without compromising the crunch of the music, and I hope that more came out of the pairing of SHIM and Royal Bliss than just this one song, as I think they fit together perfectly!  Also of note are the gang backing vocals that are incorporated in the track, adding even more depth and power to the agitated snarl that Middleton uses on the chorus sections.  Check it out below and see if you don't agree...
And in case you missed it, beware of the side effects of SHIMTAC should you choose to take your "medication"...
The EP wraps with another medicine-based track in "Ritalin".  A snappy drum beat and punked-up guitar riff drive this three minute rocker that again harnesses the angst of the band during this shut-down period for live music.  I like the guitar solo that follows the second run through the chorus, and the outro frenzy from Richards is excellent as well!  Seemingly speaking out against the government making decisions for us and pointing out that the far-left and far-right are both missing the mark for the majority of the people, "Ritalin" has a catchy rhythm, a sharp hook, and a sing-along chorus that will likely become a live show staple in 2021 and beyond.  The lyric video is below...

As I stated previously, this EP is currently only available digitally, and I honestly doubt the band will go to the expense of pressing a 3-track CD, but perhaps these songs will show up in 2021 on a full-length record that the band decided to assemble while touring was on hiatus.  Regardless, if you are a fan of the hard-edged rock n roll that Royal Bliss is known for, you are definitely going to want to track these last two songs down, and "Favorite Things" is a must-have for your Covid Christmas playlist!
Rating:  Not a fan of rating EPs due to the small sample size, but in the spirit of the season, I'll gift you with a rating of Our Favorite Things at a crankable 8!
Back To Reviews Index
Posted by arttieTHE1manparty at 3:25 PM