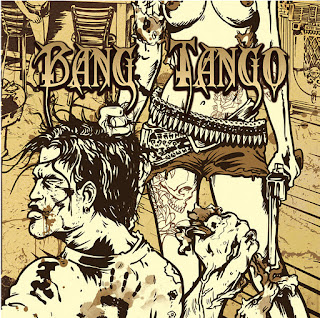 Bang Tango, at least Joe Leste and the band he calls Bang Tango, is back with their latest studio effort, Pistol Whipped In The Bible Belt.  Not gonna lie...my expectations were fairly low for this album as I thought the last two BT efforts, especially From The Hip, were barely average at best, near-torturous to listen to at the worst.  To put it bluntly, they were not Bang Tango at all and fell well short of the mark established by Beautiful Creatures. Leste's (and bassist Lance Eric's) other band.  So, with the band strapping themselves in for another go, I found myself asking, "Why bother?"

Well, I'm glad I bothered, at least to a degree, because it gives me some hope that Bang Tango can return to their previous level of performance on the next album they attempt.  Pistol Whipped didn't quite get there, but it got a lot closer than the last couple of albums.  Tracks like "Dick In The System", "Suck It Up" and "Our Way" really had me hoping that the band had fully come all the way back, as they seemed to find a bit of the sleaze magic they had once infused into their sound.  Bang Tango was a very original sounding band in the late 80's/early 90's, and these first few tracks really seemed to be headed in the right direction.  However, the fact that there is still very little in the way of the funkiness that Bang Tango once employed to such great effect keeps this from being a top-notched Bang Tango effort.  Sure, a song like the weird, trippy "Boom Box Seance" is cool and kind of teases you with what Bang Tango used to be about, but other songs, like "Drivin", for example, sound more like they belong on a classic rock radio station than on a Bang Tango disc.  Another track, "Have You Seen Her", sounds like a second-rate Guns N' Roses cover that was inspired by the GnR cover version of "Knockin' On Heaven's Door" (got all that?  If you hear the song you will understand, trust me...).

Leste's voice is still there, and the playing isn't bad, it just isn't Bang Tango.  I think the fact that Grossi is no longer a full-fledged member of the band is a real detriment to the overall sound of this effort.  Grossi does make an appearance on my favorite track here, a song he co-wrote called "Suck It Up", which contains the best solo on the album, as well.  The other guitar players here are competent, but competent isn't creative or amazing or awe-inspiring.  I'm betting they pull off classics like "Wrap My Wings" or "Dancing On Coals" very well live, but these players just don't inject anything overly special in this new batch of songs.  As a result, other than the first three songs, "Boom Box Seance", and the title track, nothing really jumps out at me as being potential Bang Tango classic material.  As a matter of fact, I would be somewhat surprised if more than a couple of these songs even find their way into a current set-list.

All in all, this is a much better effort than the last couple of discs as far as the quality of the songwriting goes.  I just wish the execution of these songs was a bit more energetic and the guitar work, in particular, left me a bit flat with a couple of exceptions.  On the plus side, the production is surprisingly good for a small indie label that I have never heard of.  The artwork is...interesting...to say the least.  And, as I said, fans of Leste's vocals and delivery style won't be overly disappointed as he still sounds to be in pretty good shape.  Not a home run, by any means, but also not a strike out.

Rating:  Perhaps if the Beautiful Creatures' discs hadn't been so solid this would have come off as being even better for me, but as it stands, I wouldn't rock Pistol Whipped In The Bible Belt at more than a 6.

Back To Reviews Index
Posted by arttieTHE1manparty at 6:51 PM