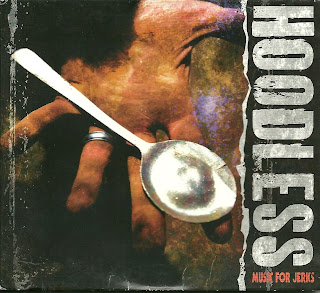 (c) 2010 Too Big To Fail
Twon--Vocals
Finn--Guitar
Paul Alan--Guitar
B Lee--Bass, Vocals
Carter--Drums
I have been sitting on this review for a little while now simply because I am not really sure how I would go about categorizing or characterizing the sound of Hoodless.  Sent to me by a friend overseas, I had never heard of this CD...or even the band...so I did a bit of research to see what I was dealing with.  A couple of places said that these guys sounded a lot like Guns N Roses, so I was like, "Alright!  This will be right up my alley!"  I popped the CD in...then immediately did another internet search to see if the people who said Hoodless sounds like GnR had been arrested for possession of drugs or maybe checked into rehab because they sound NOTHING like GnR...period.  They are not even in the same universe, soundwise.  Hoodless has a much more modern production sound, and a far more alternative vibe, than GnR ever had.  On top of that, Twon sounds nothing like Axl Rose...and I mean nothing like Axl, no matter what register he is singing in.  I really don't get the comparison between bands at all, so I'm just going to pretend it doesn't exist out there in cyberspace and I suggest anyone seeking out Hoodless doesn't use the GnR reference when looking to pick up this CD because they will be sorely disappointed.
I keep trying to come up with someone that this band reminds me of, and the closest two comparisons I can come up with are going to be a bit obscure for some people.  For anyone who is a fan of Liberty N Justice, the song "Snake Eat Snake" (found in acoustic form on Independence Day and then plugged-in on Chasing A Cure) is a very good cross-reference to Twon's vocal style, at least on several of the songs, but the music doesn't match LnJ's melodic hard rock.  Interestingly, Twon also reminds me of a lower-register Jani Lane at times. I say this is interesting because musically, if there is anyone who bothered to pick up Warrant's Ultraphobic album, there are some similarities to the bizarre althernative slant that Warrant took there, but this disc is not a Warrant album by any stretch, either.
The album opener, "Touch & Cry", is about as modern as it gets in everything from the downtuned, somewhat fuzzy guitars to the stop-and-go song structure to the production quality.  This song is something of an oddity, however, as it is not really representative of the entire album and may give first-time listeners the wrong impression of where the band is at.  I say this because the band doesn't stick to this style even on the next song.  "Waiting", the second track on the disc, is more of a sludgy, yet still melodic song...but this isn't who or what Hoodless really is, either.  Track three, "Innocent" takes yet another angle and heads off into a very alternative-sounding direction, giving us three songs with three very different feels overall.  However, it is the third, more alternative-yet-melodic sound that Hoodless seems to prefer for the majority of their songs.  There are a couple of numbers where they are a bit heavier than on others, with "Be My Whore" and "Why So Serious" both being pretty heavy songs, but I think Hoodless is at their best when they keep things more melodic, such as on the album's strongest cut, "Down".  "Run Away" is another good example of their alternative take on melodic hard rock.
One thing that disappoints me is the fact that this band has two guitar players yet they rarely use this to their benefit.  There are no great lead-over-rhythm guitar parts that really hook the listener in.  There are solos, yes, but they are rather subdued for the most part and never really grab you by the ears and shake themselves into your head.  The band is tight, there is no question, but lacking any real punch to most of the songs.
The packaging is incredibly basic, with no lyrics, thank you's, or really any information other than the very basics, to be found anywhere.  It is also a dreaded digipack, which... say it all together, readers...I HATE, but these things are likely due to budgetary restrictions on this independent project.

Overall, it's really hard for me to get a feel for where this album is going most of the time.  Are they hard rock?  Are they alternative?  Do they want to be heavy?  Do they want to be melodic?  All in all, I think fans of the late 1990's heavy alternative scene will likely find a lot to like about Hoodless and Music For Jerks, but it is a bit out of place in 2011.  The overall lack of a consistent musical direction hurts a bit, but I think the band has talent and potential if they could just figure out what they want to sound like and stick to it.  I can't honestly say, however, that this is an album that I, or many of the other readers of Glitter2Gutter, are likely to pull out and play very often.
Rating:  Rock this at 5.5.
Back To Reviews Index
Posted by arttieTHE1manparty at 4:23 PM