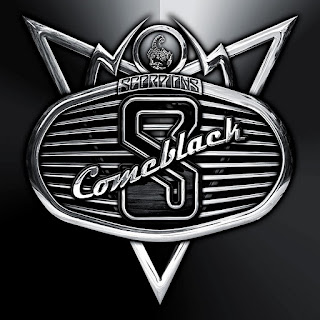 Why?  That is really the only question I can ask when I listen to the "new" album by the supposedly-retiring Scorpions.  Why would you take some of the greatest songs you have ever recorded (at least from the casual fan's perspective) and re-record them, then toss in a rather odd selection of cover tunes?  The ONLY thing I can think of is that this is a contract fulfiller for the band, officially getting the last album of a deal with Sony out of the way or something similar.  Otherwise, there is really no reason for this record to even be made.

Is it terrible?  No, not necessarily.  The re-recordings are fine musically, with Schenker and Jabs still showing their considerable skill on the guitar, and the new rhythm section of Kottak and Maciwoda is definitely solid and tight, giving these songs some killer foundations.  Even Meine sounds to be in pretty good form, although I think he has lost just a tiny bit of range which leads some of these songs to sound like they were recorded in a lower register, and the guitars downtuned a bit to match the vocals.  Again, these re-recordings aren't terrible, but to clarify the issue I have with these new recordings, as I was sitting here listening to the songs as I started sketching out my thoughts, my wife who is no more than a casual fan said to me, "why are you reviewing this?  I'm sure it's been reviewed a thousand times....".  What did she mean?  She thought the songs were the SAME RECORDINGS!  There is not enough of a difference musically to really distinguish the older recordings from the new.  Really the two main differences are: 1)  the production on a song like "The Zoo" or even "Hurricane" is quite a bit cleaner and beefed up a bit due to newer studio technology, and 2) the previously mentioned lower-register vocals employed by Meine.  Really, that's just about it for differences, which takes me back to my original question of "why?".

As to the covers, well, I guess you could say at least they aren't the tried-and-true covers that everyone has done to death.  The best two, in my opinion (and that is why you are reading this, correct?) would be the cover of the Kinks classic, "All Day And All Of The Night", and the Stones' "Ruby Tuesday", but even these sound a bit tired in the execution.  "Children..." has always been one of my favorite T. Rex songs, and while the Scorps do a credible version, it lacks that glammy sound and energy that the original had.  "Tainted Love" isn't terrible, but it really doesn't do anything to substantially upgrade the song and is kind of, well, flat as far as energy.   "Across The Universe" is just one of the most grating Beatles songs I have ever heard (sorry to all Beatles fans out there) and I skip this cover every time I hear it.  The Small Faces cover of "Tin Soldier" is just kind of there, not really bad but not overly good, either.  It seems like the band could have done more with this song, but I'm so jaded by covers now that they have become the "in thing" for bands to do that I really just don't find myself overly moved by ANY cover song I hear now, with the exception of a couple of Stryper's efforts and a small handful of others.  (On at least a semi-ironic side note, Stryper's cover of the Scorpions' "Blackout" is one of the best covers on THAT band's disc....)

So, after reading through the entire review do you see my point?  Why bother recording this album?  The covers, while decent, aren't overly inspiring in the performance, and the re-recordings don't do anything to substantially separate themselves from the originals.  So, in essence, I am sitting here with an album that is half greatest hits, half covers, and wholly a waste of recording time for a band that really could have gone out on a high note with their last studio effort, Sting In The Tail.  I'm still guessing that we are going to hear a new Scorpions disc in the not-so-distant future, but they will be on a different label and we will find out, as I have speculated, that this is simply a contractual obligations killer of an album.

Rating:  Rock this at a pretty average 6...nothing terrible, nothing special.

Back To Reviews Index
Posted by arttieTHE1manparty at 9:43 PM