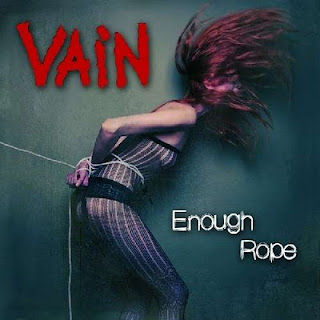 (c) 2011 Music By Mail
Davy Vain--Vocals, Guitar
Danny West--Guitar
Jamie Scott--Guitar
Ashley Mitchell--Bass
Tommy Rickard--Drums
Additional Musicians:
Fraser Lunney--Bass
Louie Senor--Drums
At first it was just the name acts from the 1980's that were making, or at least attempting, comebacks.  I'm not talking the Great Whites, Dokkens, Scorpions, or any other band that never truly went away.  I'm talking about those who were several years or multiple line-up changes between albums....you know, top-notch bands like Ratt, Winger, Night Ranger, Warrant, etc.  Then, second tier bands like Keel, King Kobra, Nelson, and recently Bang Tango, got into the mix, which was actually really cool because so many of these bands were seriously underrated.  But now, it seems like ANYONE who put out ANYTHING in the hair era is trying to jump on the reunion bandwagon or at least get in on the nostalgia shows.  I mean, Little Caesar?  And now Vain?  Is there no stop here?  Or, is the question "should there be a stop?"  Is it really such a bad thing that smaller bands are trying for one last stab at glory...even if they never really had any glory to begin with?   Well, if you read this blog with any regularity, you already know what I think of the atrocious Little Caesar return, but what about Vain's latest effort?  I mean, Davy and Co. put out several albums, although Vain was never exactly a household name and the only truly notable album the band ever released was No Respect, and that album came out 22 years ago!  What can we really expect from a band like Vain if they release something new?
The answer is...apparently quite a bit!  In many ways, Enough Rope is the follow-up that No Respect should have had in the first place.  This is a very solid, very entertaining piece of music which is saying quite a bit because, honestly, I have not liked much of anything Vain has done since 1989.  Sure, there were songs here and there, but as a whole, there is not a single Vain album I have liked in its entirety since No Respect until this new album.
The first thing that stands out is that it is amazing to me that Davy sounds almost exactly the same here as he did 20-some years ago.  Not a lot of singers can say that.  I'm not saying that lead singers sound bad after all that time, but very few sound the same...know what I mean?  Davy sounds almost identical to how he sounded on No Respect, and that's a very good thing.  His voice remains powerful, snide in spots, and still drips with the attitude that his vocals have always carried.  This is especially evident on the album opener, "Greener", which slips perfectly into that sleazy mid-tempo groove that Vain used so well all those years ago.
Another really cool thing to hear on this album is the guitar work of West and Scott (and, yes, Davy plays guitar also...).  Whether these guys are ripping through the high-speed raunch-and-roll of "Triple X", the groove-heavy "Stray Kitten Burns", or the sludgy-yet-sassy "Cindy", the guitars are extremely strong and right out front in the mix to be easily heard.  Want something bit more radio-friendly and a bit less sleazy?  Check out the classic rock feel of "Vain", the hard rock of "Solid Gold", or even the bottom heavy, mid-tempo groove of the distinctly 80's sounding "Distance Of Love".
There are a couple of tracks that are not quite up to the level of the best stuff here, but they aren't terrible at all.  "Treasure Girl" doesn't really do it for me, and the album's closer, "Worship You", while definitely a full-throttle rocker, is a bit too punkish and simplistic for the rest of the album, at least to my ears.  Again, not a terrible song by any means, but it doesn't have the same feel as the rest of the album and kind of sticks out a bit.  The production on this song also seems a tad bit muddy and maybe even over-modulated on the vocals, which gives it kind of a buzzing sound in spots.  Perhaps this was intentional given the punkish feel I alluded to before, but again it just makes the song seem to stick out that much more.
I don't know that Vain's latest effort is going to cause any rumblings in the hard rock world, but I am sure that if the younger generation of sleaze fans give it a chance to bend their ears they are going to definitely be impressed.  Perhaps it will give some people, both new fans and old, a reason to dig around and find No Respect and breathe some new life into that sleaze classic as well.  If this ends up being the last thing that Vain releases, it will be a perfect bookend on a career that was so promising in 1989 but seemed to lose steam and fizzled in the early 90's.  Start with greatness and finish with greatness and a lot of the mediocrity of the middle will be forgotten...or at least forgiven...right?
Rating:  Definitely crank this to 7.5, folks....
Back To Reviews Index
Posted by arttieTHE1manparty at 8:30 PM